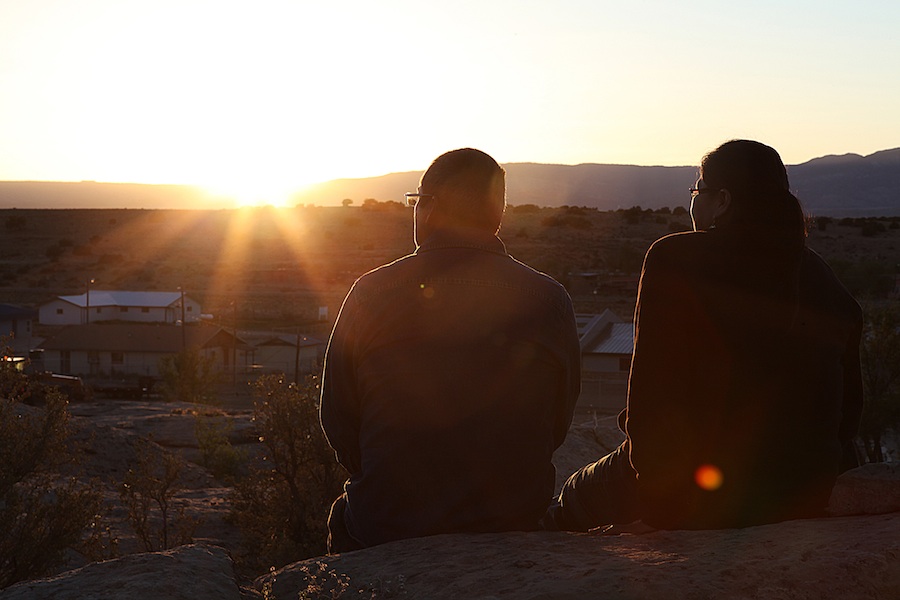 I had some initial trepidation about watching the film Sun Kissed, a selection at the LA Film Festival. Sun Kissed is a documentary film about a rare genetic disorder called XP that is afflicting Navajo children at a much higher rate than the general population. There's no cure for XP. Those with the disease burn, freckle and blister after minimal sun exposure. They are at much greater risk for skin cancers. The disease has neurological implications and leaves the child developmentally delayed. People with XP rarely live past the age of 20.

I thought, "Why would I want to watch this film? I don't know if I can handle the subject. I'm going to cry all the way through it." But I got over my selfishness and found I didn't cry until the end, not because the film isn't affecting but because the story filmmakers Maya Stark and Adi Lavy show us never plays to sentiment. They follow the Nez family who live on a Navajo reservation in New Mexico. While the father, Dorey is at home to care for their daughter, Leanndra, Yolanda works as an advocate for Native Americans with disabilities. Dorey and Yolanda invited the filmmakers (and viewers) into their home and into the intimate heartbreak of their family's situation.

When we meet the Nez family, they've already lost their son, Darnell. Leanndra is 16 and very ill. We see both Dorey and Yolanda tend lovingly to Leanndra, responding to her smallest sound. Maybe it's the vérité style or the slow, natural pace of the film. Maybe it's Dorey's prayers to restore harmony or Yolanda's discovery of the higher than normal incidence of XP in the Navajo community. Maybe it's the very obvious question of how to make sense of this kind of tragedy. But Sun Kissed is compelling and the feelings and issues it raises last long after watching the film.

I caught up with filmmakers Maya and Adi before they left Los Angeles to travel with the film to the Silver Docs Festival and asked them about the next steps for the film and its release.

Adi: We're going to Silver Docs film festival in DC. And we're going to be on POV on October 18th on PBS, so that's nationwide so we're looking forward to that. And we're kind of in the midst of looking for distributors. POV does a lot of community screeners.

Maya: We're looking for educational distribution and possible theatrical. We want to take the film on the road, especially in the Navajo reservation and these areas to start a discussion around the issues of the film. In many ways, all the Navajo people who watch the film, they really believe that this film is important as a discussion starter that would raise the issues that for so many years were not allowed to be talked about.

Adi and Maya spoke about breaking this taboo.

Adi: If your child is sick, nobody wants to see it, you're not supposed to talk about it. They're not advocating for their child. Yolanda is an exception in that sense.

Maya: The whole idea of silence and taboo around disease is something that is very much Navajo. They believe that if you talk about disease or traumatic events like The Long Walk, then basically you're wishing it upon yourself. They repress it.

As Yolanda discovers more families affected by XP on the reservation, she turns to Western medicine and genetics experts to try to understand why this is happening. In the film, we learn about the consequences of The Long Walk on the Navajo. The Long Walk was an enforced relocation of the tribe by the U.S. Military in 1864. It resulted in many deaths. The effects, as explored in Sun Kissed, are still being felt today. It is the elders who hold the keys to this part of the story. In one scene, Dorey is asking the Grandmother to talk about the history.

Maya: After a few minutes of trying to get her to talk, she started talking in Navajo and Adi and I were like, "Yes! We finally got the story." She was talking for like half an hour and once we translated the scene we realized she was actually talking about something unrelated. We were really bummed out. But that's part of it. Because people are starting to talk about The Long Walk that's why there's disease on the reservation. Breaking the silence about everything that's been happening on the reservation has caused depression, cancer, diabetes and more. You can agree or disagree with this.

Really what drew us into the story was seeing Dorey and Yolanda, seeing how they were so amazing with her and their love for Leanndra was just endless. It was all about her, it was never about anything else. It was a very humbling experience. I think in a way for us it was a very intense experience. From the beginning, from the shooting, it was intense in a good way. We both fell in love with New Mexico.

Adi: Something we tried to do with the film was show the vast difference between Dorey sitting indoors with Leanndra and what he did for 16 years -- stay home at watch his children, in the dark with the windows tinted. Nobody talks back to him. It was just him and then you go outside and it's just this gorgeous landscape and this beautiful light. But he doesn't really experience that. We tried to show the contrast.

There are some wonderful organizations helping families with XP, such as the XP Family Support Group and the XP Society. To find out more about XP, the filmmakers and Sun Kissed, please visit the Sun Kissed website.