This is because they're mostly dimwits who have only gotten where they've gotten in life because smarter people purchase them with special interest money, point them to where they can buy turd polish by the vat on Amazon and teach them how to lather up.

But Twitter allows them to seamlessly connect with people, with no filter between their busted-up brainpans and social media. And so you have the phenomenon of Chuck Grassley, tweeting messages like "Xtra delite of #99countytour: gr8 per4mance byWSioux Vocal jazz&DirktorJimG at Haywarden Hoso Tues nite I really njoy" and "I now h v an iphone." See also Anthony Weiner, obviously.

Of course, every once in a while there might be someone standing near a computer screen who sees a tweet and then tells the errant pol, "Hey, maybe you shouldn't say that, out loud, on the Internet," and relatively smarter heads prevail.

Well, now the Sunlight Foundation is doing its part to ensure that the tweets that politicians hope we didn't see are remembered for all time, with a new tool called "Politwoops." Yes, this unfortunately advances that subgenus of social media jargon that abuses the "tw" in Twitter, but I'll allow it in this case.

The press release explained as follows:

The Sunlight Foundation today announces a new web tool that reviews the tweets of elected officials and identifies when one goes missing or is edited. The tool, called Politwoops, monitors Twitter’s API and archives tweets from U.S. politicians that get removed. On the site at Politwoops.sunlightfoundation.com, you can view the latest deleted tweets in near-real time or check out deleted tweets for a particular politician. Politwoops follows the official Twitter account for members of Congress, as well as President Obama and Mitt Romney, 435 in all.

“In politics, Twitter is part of the ever-present ‘spin room’ of the digital age. But unlike other mediums, the record of events can be edited; tweets deleted from twitter.com are hard or impossible to see after the fact,” said Tom Lee, director of Sunlight Labs. “Politwoops identifies when politicians or their staffs are editing errors or rephrasing a tweet, providing a window into what politicians are thinking and how campaigns hone their social media messaging.”

Politwoops includes more than 3,000 tweets (and counting) removed by politicians’ accounts in the past six months. Some instances were reported, such as when Sen. Chuck Grassley’s account was hacked earlier this year. Others deletions are humorous such as when the Twitter account of Rep. Stephen Fincher (R-TN) compared reality television show The Bachelor to the popular The Hunger Games book series, or Sen. John McCain’s (R-AZ) reaction [http://politwoops.sunlightfoundation.com/tweet/176637687145562112] to political protests in Russia.

Already making the rounds today, thanks to Sunlight's press release, is this example of a "potentially embarrassing" tweet, a gem from Florida's 1st District Rep. Jeff Miller, who 12 days ago asked, "Was Obama born in the United States?" The tweet was deleted after 55 minutes, but during that time, Miller added this to his Facebook account: 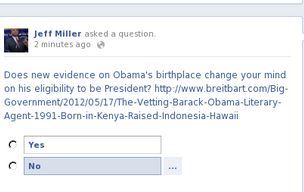 Jeremy Stahl reported that Miller's chief-of-staff, Dan McFaul, said that Miller did not write the tweet in question, which is actually fairly plausible. Sometimes our dumb Congress critters -- who have come to the dumb conclusion that they need to be using Twitter -- delegate that work to staffers who are just as dumb as they are. McFaul went on to say something, however, that fits solidly within this overall theme of dumbness that I am hopefully managing to construct: “It was not a question that we were asking. It was a question regarding a news story.”

This creates the impression that when "news stories" happen, congressional back-benchers have no choice but to construct a Facebook poll about it. Stahl went on to report that McFaul insisted that this Facebook poll was eventually deleted because "it’s standard practice in the office to delete Facebook polls once the news topics go stale."

If you honestly believe that this should be a "standard practice," then you really aren't smart enough to use tools like Facebook. Please, please, back away from the social media.