"You don't know what you're made of until you're ripped apart."

Don't assume because I'm writing this I'm coming from a place called Certainty. And please don't think that because I wrote a book, I'm officially exempt from those very curveballs that threw my life into mayhem years ago. No way. Couldn't be further from the truth.

As I write this, life today is still very much precarious and riddled with ambiguity. Yet despite bouts of anxiety, I've learned to submit to life's waves, buoying me up and down. Reality can change in a split second--this, I know.

So on that note, let me take you back to 2006 when life did an about-face and I finally grew up:

Six. Years. For six long, exhausting years I was stuck--battling feelings of hopelessness, confusion, and rage. Life was unbearable. In 2006, while pregnant with my fourth of now five children, and living a good life in Panama, I was diagnosed with a massive brain tumor. It was growing aggressively and displacing my brainstem, and threatened to take me down in a matter of weeks. Six weeks later, while recovering from an eight-hour brain surgery, discovering how to re-use my five physical senses and now permanently deaf in my left ear, my enigmatic 26 year-old brother, Adam, put a bullet in his head. That was only the beginning.

A chain of hardships followed that almost had us sleeping in the streets. In 2011, just as we were staggering back to our feet, I had a gruesome biking accident. And at full speed, landed face-first on a busy highway. Yet despite the excruciating pain of a broken jaw, shattered chin, and handful of missing teeth, I fell into a state of surrender. I detached from my body, the pain, and our shitty circumstances. I felt nothing.

From that moment on, defense mechanisms hijacked my sense of reality and kept me comfortably numb. Cocooned in a perpetual illusion of sanity and security, I operated on cruise control and successfully kept my family from plummeting into despair. And thanks to this transcendence (read: denial ) of reality, I truly believed everything would be "better tomorrow," and shared my "better tomorrow" forecast with anyone and everyone willing to listen. Suspended in La-La Land, I mastered the roles of happy mommy and supportive wife. "We're warriors fighting a battle and soon will be victorious!" became my daily cheer.

But the self-delusion worked. During my second post-surgical hospital stay in August 2011, with a wired-shut jaw, I had an epiphany: My tenacity and determination were increasing from the turmoil--feeding off it no less. There'd be no other path to the attainment of courage, faith and resilience. In acknowledgement of this new perspective, I'd unwittingly adopted a strategy of thra-vival, (thriving + survival), a kind of impromptu methodology I call my universal pearls of wisdom--tactics and self-serving mind games that provide tools to effectively manage heartache and disappointment.

Take my hearing! Distort my face! Knock my effing teeth out! Break into my house and take everything! I taunted. I'm still standing, dammit, naked and unjeweled. So give me all you got, Life! I'm still here. I'll show you how much I can bear! 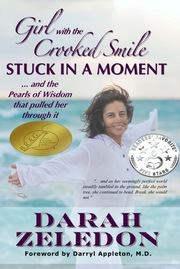 Girl with the Crooked Smile - Stuck in a Moment chronicles our downfall and simultaneous efforts to claw our way out of a seemingly hopeless and dark period. It's a tale about the adversity that befalls all of us--adversity inherent in the human experience. If you're human, it'll resonate.

Stuck in a Moment, the subtitle, pays homage to U2's lead man Bono. It was taken directly from his 2002 ballad that became a personal mantra for me and lightened my load when things got real heavy. I listened to that tune countless times each day. Each time I heard it, the floodgates opened to a river of tears. Tears of sadness. Tears of faith. Tears of surrender. Most importantly, it infused me with guts and grit to cope. To put on a brave face for my five bewildered kids and disheartened husband. To rise and face another day. To get unstuck from the moment.

The chronic pain and suffering schooled me--transformed me right down to the core, and filled in the cracks of my soul's foundation. Would I go back, if I could, and change anything? Tough question. I do miss my little brother dearly and my old, familiar face. But, I'm positive that my life purpose, my raison d'être, and the adult I am today never would've emerged under different circumstances. Certainly, not surrounded by an environment of comfort, clarity, and predictability. Character and insight are born from hardship. I get that. There's no way around it so we can't look back-- only forward.

Crooked, but still standing tall, I'm dedicated to helping others tackle hard times head-on: with courage, faith, and resolve. Neither good times nor bad times last forever. It's all just a string of moments, this thing called life. So we gotta surrender to the not-knowing, to the heartbreak. For therein lies life's greatest surprises and rewards.

More:
healthy livingWomenParentssuicideovercoming adversity
Newsletter Sign Up
The essential guide to taking care of your mind and body
Subscribe to HuffPost’s wellness email
Successfully Subscribed!
Wellness delivered to your inbox