But the 150,000-square-foot plant, where San Francisco-based Method Products will manufacture all of its popular nontoxic cleaning products, looks nothing like the steel mill that previously sat in the heart of the neighborhood.

In contrast with the pollution-prone railcars that were once built there, Method’s new “South Side soap box” has its eye on a cleaner future. For one, it is the first plant making cleaning products — and one of only a small number of buildings in any U.S. industry — to earn LEED Platinum certification for its innovative design.

The factory boasts a number of unusual features. Most visible from the outside is the giant, 230-foot wind turbine that generates 30 percent of the plant's energy. Three “solar trees” -- upright solar panels -- also help power the factory. 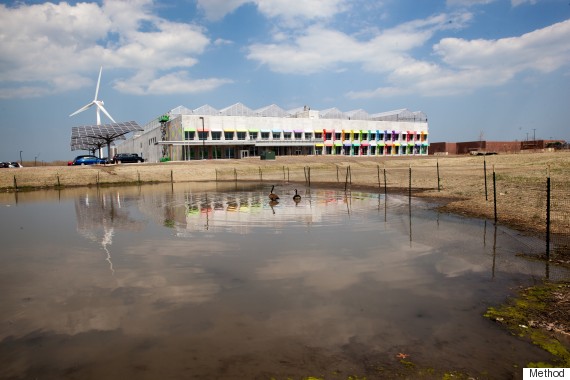 Method's newly opened "soap box" on the South Side of Chicago.

The facility’s roof is also energy-efficient, thanks to large skylights that let in light to the warehouse and distribution centers, reducing their need for electrical lighting. The roof forms the base of a 75,000-square-foot greenhouse operated by Gotham Greens, which is expected to produce 500 tons of fresh produce annually. The greenhouse helps insulate the facility, further reducing energy costs. Method has claimed it's the world’s largest rooftop farm.

The plant has a goal of sending zero materials to the landfill and plans to recycle or compost any that don't make it into the end product: Method's popular cleaning supplies, sold at retailers such at Target and Walgreen's.

“We think what we've created is the most sustainable manufacturing plant there is in our industry today, and we hope people will take it further,” Adam Lowry, co-founder of Method and a former climate scientist with the Carnegie Institution for Science Department of Global Ecology, told The Huffington Post. 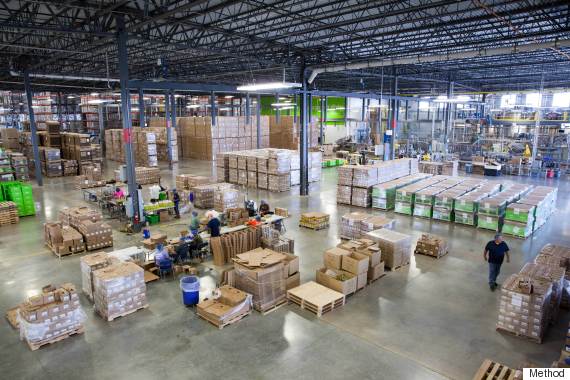 Lowry could just as easily have chosen a different route for his company’s flagship manufacturing site. But it was important to build the factory in an urban environment, he said: near rail lines so the company could transport fewer products by truck and closer to where an ever-increasing percentage of the world's population is living, allowing for shorter commutes.

And Lowry is also confident that the factory's sustainability will ultimately benefit the company’s bottom line — even if that doesn't happen right away. The wind turbine, for example, cost $2 million to build, but Lowry said expects the investment to pay for itself in seven years. Relying so heavily on renewable energy also makes the company less susceptible to the price fluctuations more traditional energy sources.

“Even if you take out the wonderful things socially, from the financial aspect, this still makes sense,” Lowry said. “We’re going to prove the business case for sustainable manufacturing.” 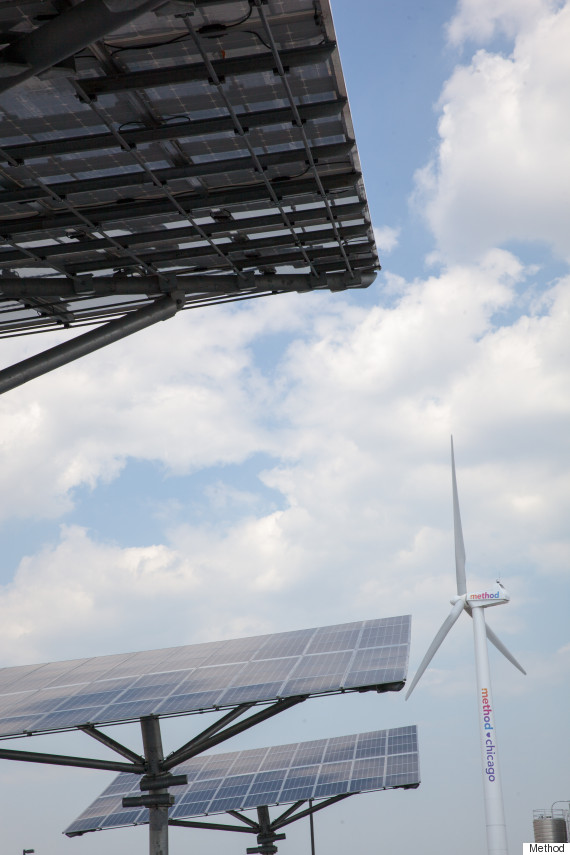 The "solar trees" and wind turbine outside the Method factory.

All the hype aside, sustainable manufacturing still faces challenges. Many companies don’t have the patience to wait seven years for a return on a multimillion-dollar wind turbine, said Michael Thurston, technical director of the Golisano Institute for Sustainability at the Rochester Institute of Technology. It’s also important, Thurston noted, for consumers to consider the big picture when it comes to sustainability. A LEED certification only speaks to a facility’s design, not its production process or the life cycle of the product itself.

“You can look at little pieces of this in isolation and it may look good, but you have to look at the big picture to understand what the true impact is,” Thurston noted.

“As a case study for how to put [sustainability] into practice, it seems to me they’ve kind of hit a home run on all three” pillars, said David Dornfeld, director of the Laboratory for Manufacturing and Sustainability at the University of California-Berkeley. He was referring to three aspects of sustainability: economic, environmental and social impact. Dornfeld sees other companies marketing their green initiatives — such as Levi’s water-conserving jeans collection — as being sustainable in a way that can only benefit them.

“This is something that the smart companies who are looking a bit over the horizon are going to want to figure out,” Dornfeld said. “I can’t foresee any scenario where doing this could harm you if you look carefully at the technology you’re applying.” 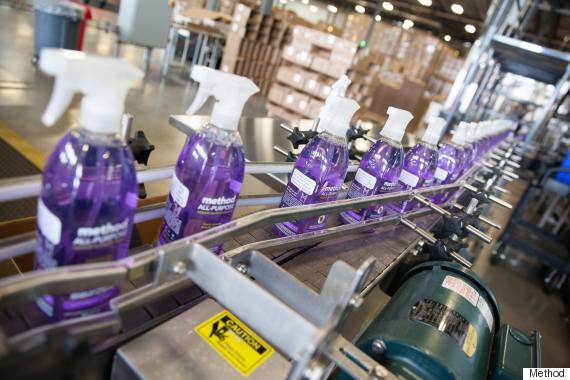 Bottles of Method cleaner move along the production line.

A number of reports back up Dornfeld’s claim. According to a 2009 report from the MIT Sloan Management Review and the Boston Consulting Group, companies “acting aggressively on sustainability” found ways to cut costs, created new revenue streams and developed more innovative business models.

And consumers prefer sustainability. A 2014 Nielsen analysis found that 55 percent of consumers across 60 countries said they were willing to pay more for products and services sold by “companies that are committed to positive social and environmental impact,” though North American and European consumers were less likely to say so than consumers in other parts of the world.

The Nielsen report also noted that millennials are especially responsive to sustainability actions, suggesting that consumers in the future will be even more interested.

“So,” HuffPost asked Lowry one day after his plant’s grand opening,” is this the factory of the future?"

“I certainly hope so," he said.