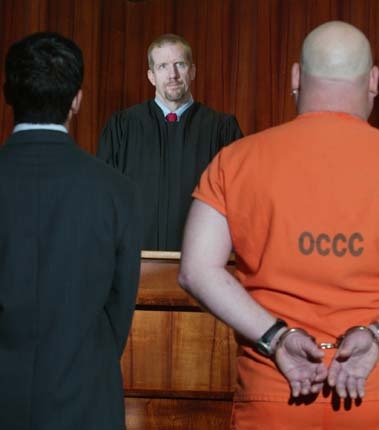 Judge Steven Alm was confounded after his first week on Hawaii's circuit court. Amongst his other dockets, he watched Hawaii's probation system in action, and he did not like what he saw.

"[It] was an all of nothing system that wasn't working," says Alm.

In 2001, when Alm joined the bench, he saw people on probation that were already on their 15th or even 20th violation. He also witnessed two disparate and subjectively applied probation options: either talk to the person and provide them support or send them to prison for a long time. This approach to probation was uncertain, disproportional and not standardized. So, Judge Alm set out to change how probation worked in his courtroom.

Judge Alm's solution became Hawaii's Opportunity Probation with Enforcement (HOPE). It is a program that embodies a deterrence approach to probation and parole.

Even though Alm had been a prosecutor before becoming a judge, the idea for HOPE came from being a parent. "I thought about how I was raising my son, and when my kid did something wrong you do something about it immediately. You tie misbehavior with a consequence." Why, Alm thought, not apply the same practice to probation?

"[HOPE] is about proportionate and consistent punishment," says Alm.

Instead of the uncertain and subjective probation system Alm inherited, HOPE was timely and predictable or "swift and certain" in policy vernacular. Failed your urine analysis test? Before HOPE, you may be reprimanded but likely not put in front of judge. Under HOPE, you are immediately arrested, sent to jail and in front of a judge in less than two days.

Anecdotally, the proportionate certainty created by HOPE got people's attention. Angela Hawken, an assistant professor of public policy at Pepperdine University, studied HOPE and was marveled by what she heard. As she told Slate in 2013, the people imprisoned by HOPE talked about how they were in jail because they had "messed up." Hawken said, "That language of personal responsibility is unimaginable if you're a criminal justice researcher."

The threat of immediate sanctions in Hawaii seemed to work, and this piqued the interest of other jurisdictions around the country.

Of those other jurisdictions, Washington State took the biggest leap. In 2011, King County, home of Seattle, ran a 60-day pilot program to test the implementation a HOPE-like deterrence model. By June 1, 2012, Washington had taken the model and expanded it to everyone released on parole, as well as certain high-risk probationers.

Before this programmatic paradigm shift to "swift and certain," Washington officers could only provide jail for violations in 30, 60, 90 and 120 day increments. The regimented guidelines, says Hamilton, "[Were] hurting people that were employed, in substance treatment, and renters." The shorter jail sentences under the swift and certain model diminished those harms.

Washington is the first to scale the HOPE model statewide, but there are another 24 jurisdictions that have adopted a version of HOPE's deterrence approach, this according to the Laura and John Arnold Foundation. Based in Houston, the Arnold Foundation is a philanthropic organization that focuses on criminal justice, education and public accountability. Most recently, they have thrown their support behind the HOPE model by funding Hamilton and van Wormer's research in Washington. They are also funding the Institute for Behavior and Health (IBH) to develop a blueprint with Judge Alm to help other jurisdictions successfully adopt the model.

"You have jurisdictions adopting [the HOPE model], some with a lot of fidelity and some with less," says Anne Milgram, the Vice President of Criminal Justice at the Arnold Foundation. "Without a blueprint or tool kit that defines [the HOPE model] it is hard to get the maximum benefit and better results."

The blueprint is an important next step as van Wormer explains. "Historically, across the country, we roll out these big programs, but we drift back towards punitive models. We need to make sure that staff are adhering to these rules and standards." Hamilton concurs, "The key is that [the HOPE] model is doing sanctions proportionally. Instead of 30 days you're doing one to three; we're finding that three days is just as effective as 30, 60 or 90 days."

Both the WSU study and the IBH blueprint will be released this summer. Judge Alm is quick to point out, however, that this research is not about cutting and pasting Hawaii's experience into another jurisdiction. "HOPE isn't there to replace an existing probation system."

However, Milgram notes that this work is intended to be one more tool to help local jurisdictions. "Benchmarks, standards and certifications from the source are priceless to a jurisdiction trying to adopt [the HOPE model]."