The Extraordinary Synod on the Family opened today by Pope Francis at the Vatican could bring about important changes regarding the church’s position on divorcees, homosexuals and non-married couples, adapting to the ways families have changed in the modern world.

In two weeks, the Synod will come up with only an outline, since any decision will be postponed until 2015. Nevertheless, it is an extremely important moment of reflection, desired by Pope Francis himself: the assembly of cardinals and bishops will actually be discussing very delicate subjects for the church, including the treatment of divorced followers, the attitude towards homosexual couples, and the relationship between the church and society regarding family and sexuality in general.

Opening the synod, Pope Francis advised “speaking clearly” and “with parrhesia” (a Greek term meaning the freedom to speak honestly). The pope has often spoken about the need for the church to take on the challenges of the contemporary world and the big changes at the root of the microcosm that is the family; lovingly accepting those who have erred and allowing remarried divorcees to take communion, an idea which, despite not appealing to all of the cardinals, might (with certain restrictions) pass in the assembly.

This, at least, reflects the spirit of open-mindedness entrusted to Cardinal Peter Erdo, Relator General of the Synod as well as the Primate of Hungary and President of the European Bishops. “Divorcees who have remarried in civil courts,” stated Erdo, “belong to the Church. They need and have the right to be guided by their pastors.” Moreover, referring to the result of the questionnaire relating to the themes of the synod sent out in November 2013 to all of the parishes of the world: “regarding divorcees who remarried in civil courts, many reaffirm that the difference between those who are responsible for breaking up a marriage and those who have been abandoned needs to be taken into account: the pastors of the church should take care of them in a specific ways.”

Reading between the lines of the cardinal’s words, there are essentially two restrictions with allowing divorcees to receive communion: the fact that the second marriage (without an annulment) is not recognized by the church, and the solely pastoral (and therefore not doctrinal) aspect that lends itself to the debate.

Eucharist for Remarried Divorcees, with Restrictions. Before coming up with possible solutions to the complexity of allowing remarried divorcees to receive communion, Erdo made clear some preconditions: “the doctrine of the indissolubility of marriage is not coming into question as such. Therefore it is not doctrinal questions, but practical questions of a solely pastoral nature- otherwise inseparable from the truth of the faith- that are being discussed in this synod.” And “in the case of a sacramental (conjugated) marriage, after a divorce, while the first spouse is still alive, it is not possible to have a second marriage recognized by the church.”

The archbishop of Budapest then outlined two solutions: “Divorcees remarried in civil court belong to the church. They need and have the right to be guided by their pastors. They are welcome to listen to the word of God, to participate in the liturgy of the church, to pray and to do charitable works. The pastors of the church should take care of them in very specific ways, taking into account the circumstances of each person“ Erdo stated.

The first path outlined by Erdo is facilitating the annulment of a marriage, with three possibilities: “Many seem to think there needs to be a timely and efficient way of ascertaining the invalidity of a marriage bond, first of all the need for two appeals confirming the declaration of annulment of the marriage bond, proceeding to the second phase only if there is no appeal from one or both parties or from the defender of the bond within a defined timeframe.“

Second, echoing Benedict XVI, a solution outside of the judicial process, since “according to authoritative proposals, the faith of those to be married needs to be evaluated to ascertain the validity of the sacrament of marriage, according to the general principle that the validity of a sacrament requires that the party intends to do what the Church does.” Third, the case of the “Petrine Privilege,” concerning marriages of disparity of cult.

In conclusion, Erdo echoes the proposal formulated by Cardinal Walter Kasper at a Consistory of Cardinals in February, suggesting to “examine more deeply the practice of some orthodox churches, which allows for the possibility of a second or third marriage marked by a penitential character. Examining this matter is necessary to avoid interpretations and conclusions that are not sufficiently well-founded.”

Relator General of the Synod: No Discrimination Against Gays, Except for Marriage. From the instrumentum laboris “emerge two clear aspects regarding homosexuality.” So declared Cardinal Peter Erdo,in his relatio ante discpetationem. “First of all, there is a full consensus that people with a homosexual orientation should not be discriminated against, as reaffirmed in the catechism of the Catholic Church. Secondly, it is clear that the majority of the baptized - and all the Episcopal conferences- do not expect that these relationships be equated with marriage between a man and a woman, nor is there a consensus among a vast majority of Catholics on the ideology of gender theories.”

Synod On The Family May Open Door To Changes For Divorcees, Not So Much For Gay Marriage
Synod on Family 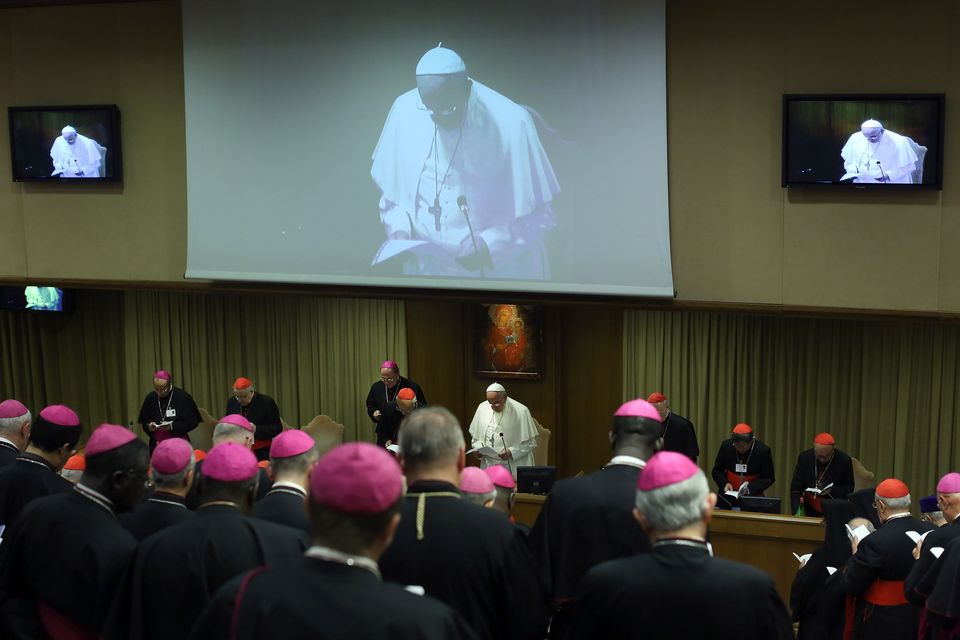 1 / 11
Pope Hosts Synod On the Themes Of Family
VATICAN CITY, VATICAN - OCTOBER 06: Pope Francis attends the first sessions of the Synod on the themes of family at the Synod Hall on October 6, 2014 in Vatican City, Vatican. Pope Francis addressed the Fathers of the Extraordinary Assembly of the Synod of Bishops on Monday, as they began their first full day of sessions exploring the pastoral challenges of the family in the context of evangelization. (Photo by Franco Origlia/Getty Images)
Franco Origlia via Getty Images