The high-tech design of the dispenser makes drug misuse virtually impossible. A fingerprint scanner ensures that the drugs are being given to the prescribed patient, while an internal timer dispenses the pills in prescribed intervals and dosages.

“The device starts to work when the patient scans in his or her fingerprint,” Carney said in a statement. “This rotates a disc, which picks up a pill from a loaded cartridge and empties it into the exit channel. The pill falls down the channel and lands on a platform where the patient can see that the pill has been dispensed.” 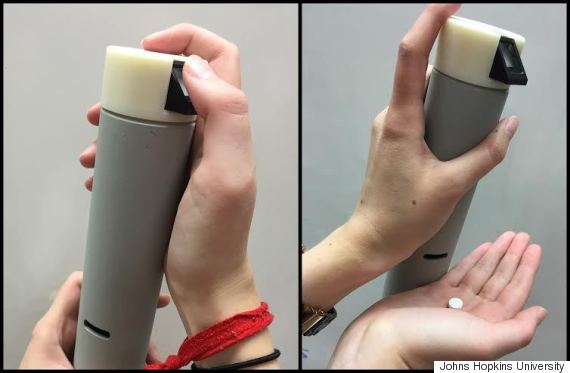 The Johns Hopkins students’ tamper-resistant pill dispenser prototype features a fingerprint scanner that verifies the patient’s identity and then releases the correct dosage only within the prescribed time frame.

And if you’re thinking you can just crack it open to get your extra painkiller, think again. The dispenser is tamper-resistant, constructed of a super-strong steel alloy that is also used to manufacture aircraft landing gear. Carney once challenged a student to try to break into it: “He took a hammer and other tools to it, from a hacksaw to a drill, and he broke at least one drill bit trying to get it open,” she said.

Carney told The Huffington Post that her team decided to develop the pill dispenser after recognizing that there was nothing in the market like it. “The current pill dispensers you get from the pharmacists are neither secure nor personalized,” she said. “We saw that there could be a use for a new one.”

The project comes with quite the purpose. Officials at the U.S. Centers for Disease Control and Prevention estimate that every day, 44 Americans die from overdoses on prescription painkillers. Federal officials also say that at least one in 20 Americans ingests drugs prescribed for someone else.

Other studies have shown an alarming connection between painkiller addicts and heroin usage. A 2013 report from the Substance Abuse and Mental Health Services Administration found that people who take prescription painkillers non-medically are 19 times more likely to use heroin than those who don't. And in recent years, the use of heroin -- especially in suburban areas -- has become a growing issue.

While the innovation is only in its prototype stage, Carney said her team is hoping to get a patent on the product and eventually bring it to market. She said she envisions a system where the dispensers are sold to pharmacies, which can then regulate and reuse the products at their discretion.

“We didn’t really know how far it would go once we signed up for [the project],” Carney told HuffPost. “But we’re really excited about the progress that it’s made so far.”