A new study by the nonpartisan Congressional Research Service has found that over the past 65 years, tax cuts for the rich have not led to economic growth and instead are linked to greater income inequality in the United States.

The study found that cutting taxes for the rich does not increase saving, investment, or productivity growth. "The top tax rates appear to have little or no relation to the size of the economic pie," the study said.

Two graphs show the lack of connection between tax rates for the rich and economic growth: 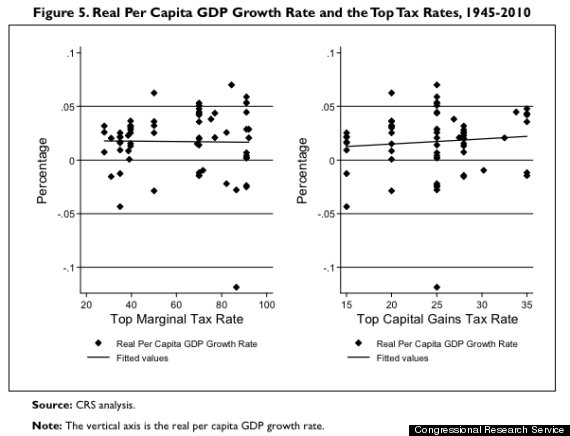 The authors noted that top-tier tax rates could have an effect on "how the economic pie is sliced." The study noted that in 1945, when the richest families had to pay a marginal tax rate of more than 90 percent, the top 0.1 percent of U.S. families accumulated 4.2 percent of all income gains. In 2007, in contrast, when the top marginal tax rate was 35 percent (which it still is), the top 0.1 percent of U.S. families captured 12.3 percent of all income gains.

Two graphs from the study show a clear connection between higher taxes for the rich and less income inequality: 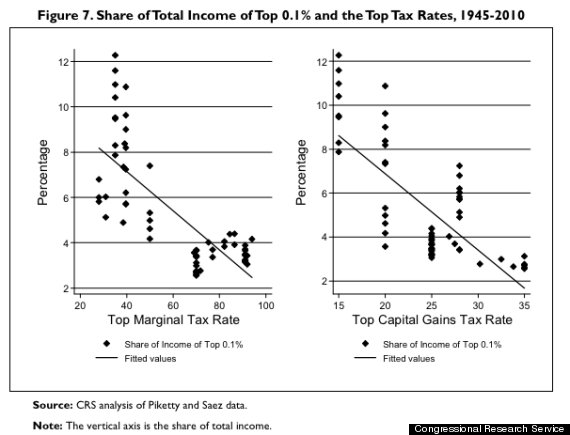 Those findings are inconvenient for the Romney campaign. In a continuation of trickle-down economic theory, the Republican presidential nominee has argued that cutting taxes for the rich would "stimulate entrepreneurship, job creation, and investment," thus "breathing life into the present anemic recovery."

Romney has said he wants to extend all of the Bush tax cuts, while President Obama wants to extend those tax cuts only on the first $250,000 of taxable income. Romney also wants to slash marginal tax rates and taxes on investment income, as well as eliminate the estate tax -- all of which would disproportionately benefit the rich.