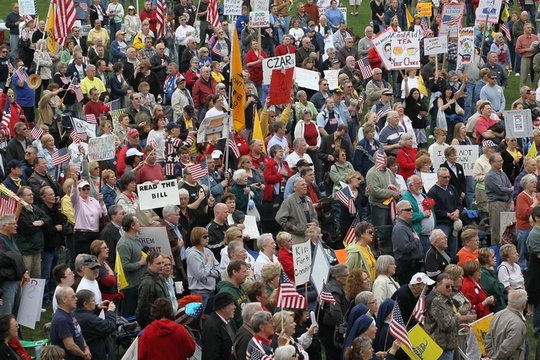 Reading about the NYT poll on the makeup of the Tea Party, the most interesting data (beyond the anti-poor, anti-black sentiment) was that Tea Party members are wealthier and better educated than the general public. (The poll pegged their numbers at eighteen percent of the American public -- primarily Republican, white, male, married and over forty-five.)

If that's the case, you have to wonder how much the photos we've seen over and over, represented by the folks in these Huffpost slideshows or "the Teabonics element" have been much less reflective of the overall group. Of course, "stupid" sells, right? ...Which is not to say, of course, that there is the highest correlation between education and, at least, social intelligence in this swath of the public.

If we can assume just from looking, though, perhaps this crowd shot, taken last week in Illinois, gets the demographics about right?

For a breakdown of the latest visual spin, visit BAGnewsNotes.com.