Bankrupt 'Houseives' Teresa Giudice is cashing in by sitting for magazine interviews, and for the latest In Touch cover she opens up about the humiliation of declaring bankruptcy and defends her spending sprees. Meanwhile she's asking for a raise on the show.

From the In Touch press release:

For Teresa Giudice, it was like living a nightmare. After ten years as the big-spending wife of a successful real estate developer, the Real Housewives of New Jersey star was being told by a lawyer that she and her husband, Joe, were $11 million in debt -- and needed to file for bankruptcy as soon as possible. "I was humiliated," she tells In Touch in an exclusive interview.

Not to mention shocked. Kept out of the loop regarding Joe's business dealings, Teresa, 37, had no idea they were in so much financial trouble until that fateful day in the lawyer's office. "Joe thought things were going to get better," she explains. But they got worse and worse in more ways than one. After that initial shock, Teresa saw her lavish tastes scrutinized and mocked. And her alleged $60,000 spending spree on home furnishings -- which reportedly took place right after she and Joe declared bankruptcy -- didn't win her many supporters. When Teresa stated her case on The View, insisting that she's now living within her means, Joy Behar replied, "How can you live within your means if you're now $11 million in bankruptcy?"

These days, though, Joe has taken control of the finances, doing all the grocery shopping and imposing a limit on Teresa's credit cards. And he doesn't mind: "I want to save more." While the girls used to always have brand new clothes, they now wear each other's hand-me-downs -- easy, since they're all growing so fast. "Me and my husband have learned a lot from our mistakes," Teresa shares, adding that, as heartbreaking as it is, bankruptcy does have a silver lining. "It's brought us closer together." 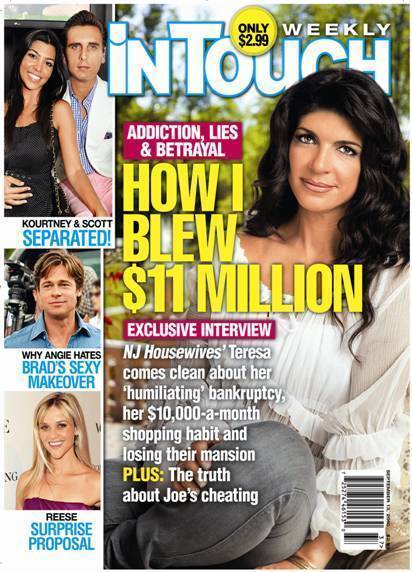