A New York Times reviewer in early February took issue with Tesla's new "Model S" and panned the distance the electric car could travel between charges. Now, both Tesla and the Times are going the extra mile to prove one another wrong.

Scroll down to see Tesla's charts.

In a lengthy blog post titled "A Most Peculiar Test Drive," Musk walks through and analyzes the vehicle's data logs, captured while New York Times reviewer John Broder was at the wheel. "In Mr. Broder’s case, he simply did not accurately capture what happened and worked very hard to force our car to stop running," Musk summarily states.

The CEO's case rests on a series of charts which illustrate the car's vitals, including speed, battery charge, estimated range and cabin temperature.

Musk challenges the notion that Broder turned down the car's temperature to save power, writing, "[Broder] in fact turned the temperature up to 74 F."

Addressing the claim that Broder "limped along" at slow speeds, Musk says that "Broder in fact drove at speeds from 65 mph to 81 mph for a majority of the trip."

Musk also takes to task what he says are Broder's inconsistent charging habits. From Musk's takedown of the review:

Prior to Musk's potentially damning blog post, John Broder published a fairly detailed rebuttal of some of Musk's earlier criticisms. "My account was not a fake," Broder wrote. "It happened just the way I described it."

As promised, Broder also released an article addressing Musk's latest challenges. Writing on Feb. 14, Broder first reminds readers of his journalism credentials (and by extension, his journalism ethics, which Musk has questioned), then launches into an extensive countering of Musk's numerous points.

One particularly contentious subject centers around data collected from Broder's first stop in Milford, Conn., at a Supercharging station, which is one of Tesla's electrical "refueling" ports, designed to juice up Tesla vehicles faster than ordinary electrical car-charging stations. Musk says Broder appears to have pulled into the station, then driven "around in circles" to get the Model S to stop with hardly any power, to which Broder responds, "I was in fact driving around the Milford service plaza on Interstate 95, in the dark, trying to find the unlighted and poorly marked Tesla Supercharger."

The largest takeaway from Broder's response is this: Much of what Broder did -- or didn't do -- was, he says, at the behest of Tesla personnel, with whom he claims to have been in contact throughout the trip.

For what it's worth, the only third party with any perspective on this dustup is Rick Ibsen, the tow truck driver who collected the Model S after the vehicle died during Broder's test. And Ibsen seems to back up Broder. "It didn't appear that the gentleman driving the car wanted it to not work," explained Ibsen in an interview with automobile-focused news blog Jalopnik. "I don't think he had any desire to stand freezing on the side of the road."

Several outlets have also come to Broder's defense, notably the Atlantic Wire, which published on Feb. 14 a point-by-point breakdown of Elon Musk's data and concluded that "Broder may not have used Musk's car the way Musk would like, but Musk is, for now, overhyping his case for a breach of journalism ethics."

Grab the popcorn. This could go on for a while. 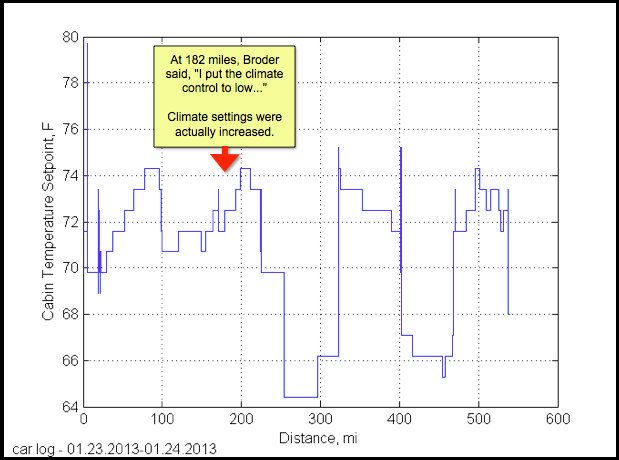