Jesus arrives as a gay man of today in a modern city with "The Passion of Christ: A Gay Vision," a controversial series of paintings that are newly available as a book.

The paintings and the new book that I wrote about them have been attacked as blasphemy by conservative Christians. But we refuse to concede Jesus to those who act like they own the copyright on Christ, then use him as a weapon to dominate others.

PHOTO GALLERY
The Passion of Christ: A Gay Vision

The contemporary queer Christ figure is persecuted, killed and rises again in the 24 paintings by New York artist Doug Blanchard. A surprisingly diverse group of friends join the gay Jesus on a journey from suffering to freedom.

Right-wing Christians denounced us as "blasphemers" and condemned our book as an "abomination," "disgusting" and "an outrage to mock Christ in this manner." Facebook canceled ads for the book because it was too "shocking." When the LGBT community protested, the social media company reversed its decision and "resurrected" the ad.

LGBT Christian visions are important now because conservatives are using religion to justify discrimination against queer people. Whenever anyone commits violence against another, Christ is crucified again -- including when LGBT people are attacked or killed because of who they are.

Every group envisions Christ in their own image from their own context, and now there is a gay vision of Jesus, shaped by the political, economic and cultural forces of our time. LGBT people often identify with the hurt and humiliation that Jesus experienced on the cross.

As Easter approaches, Christians around the world remember Christ's Passion -- his suffering in his final days as he was betrayed, arrested and brutally killed. Many LGBT Christians and their allies turn to "The Passion of Christ: A Gay Vision" for inspiration.

Blanchard's gay Way of the Cross shows a contemporary Christ figure who stands up to priests, bankers, politicians, soldiers, and police -- all of whom look eerily similar to the people holding those jobs today. He is jeered by fundamentalists, tortured by Marine lookalikes, killed as news cameras broadcast his pain, and rises again to enjoy homoerotic union with God.

The queer Christ is intended to broaden, not limit, how Christ is perceived. Every image of Jesus is insufficient. It is valuable to have images of the "queer Christ" along with all the others to show that Christ is with all human beings in our full diversity.

Crucifixion is the most common theme in LGBT Christian art. Artists consider it the best way to express the horrors inflicted on queer people, to advocate justice and perhaps to offer the hope of new life.

The queer Christ is encountered in members of the LGBT community who have been martyred through anti-LGBT hate crimes, driven to suicide, killed by AIDS or executed in countries where homosexuality is a still capital crime.

The growing number of queer theologians say that the queer Christ is here to free and empower people who were wounded in Christ's name. Those who were rejected by the church for homosexuality may find that the gay Jesus welcomes and understands them. When believers open to the possibility of a queer Christ, it becomes easier to see the God within the LGBT community.

I have blogged about a wide variety of LGBT Christian images by dozens of artists. Many are included in my book Art That Dares: Gay Jesus, Woman Christ, and More. But none has had as much impact as Blanchard's gay Passion of Christ paintings. Accessible but profound, they are so popular online that my blog series about them was published recently as an illustrated book. Like the paintings, the book is titled The Passion of Christ: A Gay Vision..

Nobody knows for sure what the historical Jesus looked like or whether he was attracted to other men. Some progressive Bible scholars do argue that Jesus had a same-sex lover, but that is not the point of his life.

What the gospels emphasize about Jesus is the wildly inclusive way that he loved. He lived in solidarity with outcasts, including prostitutes, lepers, immigrants, widows and the poor. Christians believe that in him God became flesh -- a total, shocking identification with all people, including the sexually marginalized.

"Christ is one of us in my pictures," Blanchard says in the introduction to the book. "In His sufferings, I want to show Him as someone who experiences and understands fully what it is like to be an unwelcome outsider."

Blanchard, an art professor and self-proclaimed "very agnostic believer," used the series to grapple with his own faith struggles as a gay New Yorker who witnessed the 9/11 terrorist attacks.

In the book each image is accompanied by my essay on its meaning, artistic and historical context, Biblical basis and LGBT significance, plus a short meditation with a scripture and one-line prayer. The images come alive in a video made for the book launch. Excerpts from the book will be posted daily during Holy Week at the Jesus in Love Blog.

Blanchard's Passion provides a 21st-century version of the traditional Stations of the Cross, a set of artistic images used for meditation on Christ's suffering and death. The Stations of the Cross remains one of the most popular devotions among Catholics and some Protestants, especially during Holy Week and on Good Friday. 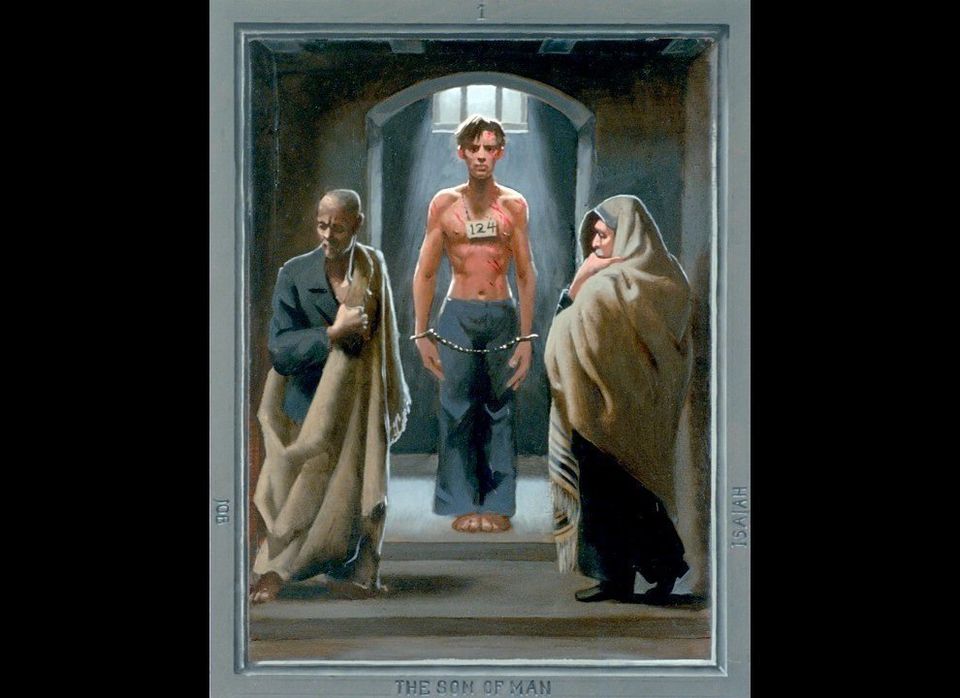 1 / 15
Son of Man (Human One) with Job and Isaiah
A gay vision of Jesus is here to heal the hate and discrimination done in Christ’s name. Jesus loved everybody, including his enemies, but he was rejected by society. They locked the liberator in prison. From <a href="http://www.passionofchristbook.com/" target="_hplink"><em>The Passion of Christ: A Gay Vision</em></a> with art by Doug Blanchard and text by Kittredge Cherry