The united Nations Global Goals for Sustainable Development has 17 goals set with GOAL 4 being "QUALITY EDUCATION"- To Ensure inclusive and equitable quality education and promote lifelong learning opportunities for all; education is a world issue which is why it is part of the goals for sustainable development. 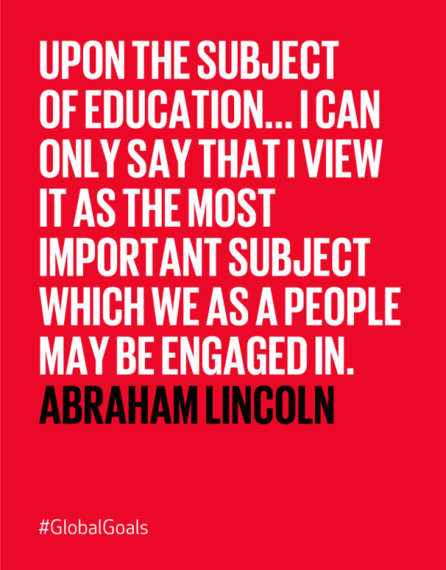 The issue of education has become such a major topic today in the global world as a whole because of the predominant cry for education reform in the schools and colleges and also the cry for equal access to education in every nation; if education wasn't a vital aspect that dictates what the future holds of not only a society but of the world- then no one would be discussing education as a subject of focus.

A greater part of the problems the world faces today exist due to the lack of access to education; lack of education leads to increase in poverty, ignorance and serves as a ripple effect that causes lasting detriments to a society. When you view the future with a greater perspective, you must not only think of the possibilities of change but of the agents that will implement these change which is why the education of the young people in a society (millennials) should be highly regarded because they are inevitably the future. What does the education of the future change-makers and leaders look like?

With this question in mind while exploring Art of Being Alive stories related to education, I got to interview the vice president (Romain Vak) of a new model of higher-ed school that is changing the learning field of education. They are reinventing Education beyond what we know it and their existence calls for global attention because any reform to education at this point, that allows for out of the box concept and changing the playing field of education-is worth sharing to the world! 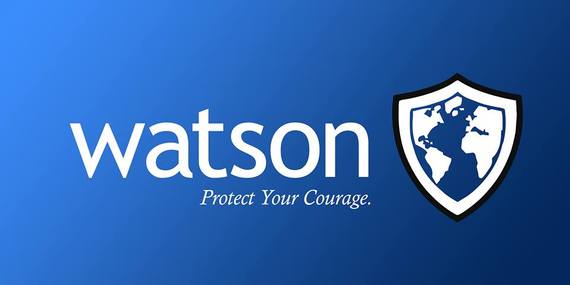 "Watson is a new model of higher education in Boulder, Colorado for student innovators, leaders and entrepreneurs aged 18-23 that includes short master courses from the world's foremost leaders, entrepreneurs, and thinkers including a co-recipient of the Nobel Peace Prize, one of Time Magazine's 100 most influential people and more; intensive mentorship; and training in the entrepreneurial skills of empathy, creativity, resilience, grit, bootstrapping, team building and fundraising. Watson helps students develop and advance solutions to the toughest challenges facing the world. Students can come to Watson for either a semester or a 3 year accredited Bachelor's of Science in Entrepreneurship through our collaboration with Lynn University."- Watson University 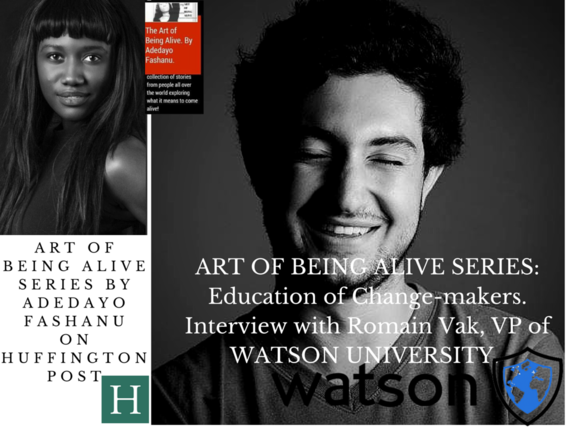 Adedayo Fashanu: How did the Watson university vision come about?

VP Romain Vak: There are more issues in the world than ever before, and the problems we face are needing urgent solutions. The next generation leaders and change-makers will be the ones that will need to step up to the plate. The irony of the matter is that the last formal instruction and mentorship they receive in traditional models of higher education, doesn't give these next generation changemakers the confidence, resilience, grit or creativity they'll need to solve these big problems. We created Watson because we have faith that the world we'll live in tomorrow will be better than the one today, as long as we step up to the plate, and create sustainable solutions to address these issues. We created Watson because we want to better prepare these promising change-makers who will step up to these big challenges. As well as serve as a model for what education could look like.

Adedayo Fashanu- Was your goal to transform the way college system of education is and why? What do you think about today's educational system and is there a need for it to be reformed?

VP Romain Vak: Absolutely. We think higher ed needs some serious re-thinking. So we built Watson as a business incubator, whereby students come and build solutions to big global and environmental challenges. We have a strong bias towards action, which we think is missing in higher education today. We also believe that the best metric of success is how a student is able to viably create a solution through a venture that they're building out at Watson, as well as their own capacity to be an effective change agent. However, we also recognize that we have to work within existing parameters of higher education to effectively move the needle in the right direction. So we're excited to announce that we're working with a couple universities (Lynn University and Naropa University) to give our students a Bachelor's of Science degree in as little as 2.5 years for going through our incubator and building a venture.

VP Romain Vak: There are three parts of the Watson experience:

1) Transformative Entrepreneurship- we want our students to walk away with a tool-belt of hard skills that will actually be useful to them as entrepreneurs and changemakers. For example creating an effective messaging platform, fundraising strategy, and team-building, building transformative teams, among many others.

3) The Watson Laboratory- the time and space for students to build out their ventures. During the lab, they are coached by some of the best and brightest entrepreneurs, thought leaders, and lead-practitioners.

Adedayo Fashanu: Who are the sort of students Watson University is for or attracts?

VP Romain Vak: Watson is definitely not for everyone. Instead, we're scanning the globe for "The crazy ones. The misfits. The rebels. The troublemakers. The round pegs in the square holes. The ones who see things differently. They're not fond of rules. And they have no respect for the status quo" to quote Rob Siltanen. 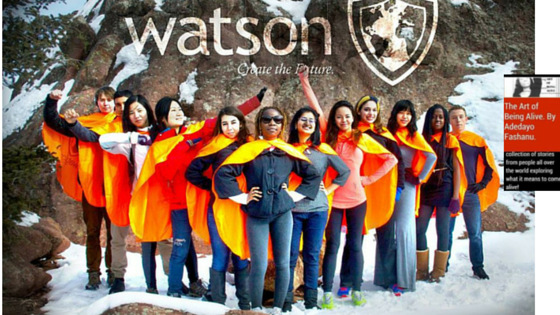 It's one of our favorite quotes and we've built Watson for these people because "while some may see them as the crazy ones, we see genius. Because the people who are crazy enough to think they can change the world, are the ones who do."

Adedayo Fashanu: What is the admission process of the university and what scholarships does Watson offer?

VP Romain Vak: We don't care about GPA or test scores like most universities do. Instead, we value commitment, and a strong hunger to have an impact in the world beyond anything else. Our application really reflects that. It's been a really good way for us to vet what kind of students we want to work with! 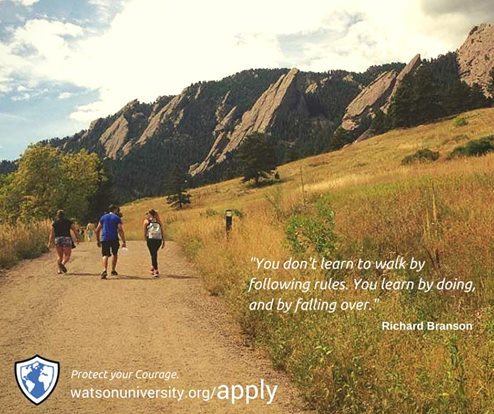 Adedayo Fashanu: What is your personal story or journey that has led you to this position?

VP Romain Vak: In my first year of college I started a business. I worked on it in the late hours after I finished my homework and on weekends, yet I felt like I was learning way more about the world of business from working on my start-up than by going to class and completing the assignments. I thought this was ironic, and so I dropped out after my second year. This experience led to an opportunity to travel around the world helping entrepreneurs in different countries understand the power that entrepreneurship could have to solve both local and global problems. My time off from school taught me more about being an effective entrepreneur and change agent, and so I figured that higher education needed some work, which is why I'm so excited to be working with an amazing team who have similar narratives, to create a viable alternative to the status-quo!

Adedayo Fashanu: What does the 'Art of Being Alive' mean to you?

VP Romain Vak: Being alive means that I believe that I am what's wrong with the world. Let me explain:

As far as I've seen, it takes individuals to believe they are the problem with the world, because if the problem is theirs to begin with, the solution is within them. Being alive means feeling accountable to the global problem-sets that exist around us. What would happen if everyone felt accountable? Being alive means stepping up to the plate because I think that pointing fingers at others, at those who might have power or clout or at the rule all systems that might even be governing us all, actually births and unremittingly aggravates the problems in our world. This may sound negative, but I think it's a beautiful thing, because the solution is something that we all have full control of.

VP Romain Vak: One of the most transformative things I've ever heard is that in life there are two paths that never converge. One is the path of safety, and the other is the path of growth. I've seen it time and time again from the cohorts of students that come to Watson. They are the ones that take the path of growth, whereby they forego the traditional route which is easy and more comfortable for the path that will be long, challenging, ridden with pain, because they know that it's by taking that path that they'll grow, and do things that they never thought they could. I think living a meaningful life is simple: take the path of growth.

Stay updated for more stories or interviews of impact and change, follow Adedayo on twitter @adedayofashanu.
To find out more about Watson University, visit http://www.watsonuniversity.org/apply/

'Art of Being Alive' is a coffee-table book collection of interviews and stories of change exploring what leads to a meaningful life; dedicated to the millennial generation. The book is being curated by the author of this series, Adedayo Fashanu.