The job market was weaker than expected in August, as employers added no new jobs, on net (this 'net' business is important -- some jobs were created last month, some lost -- this month, creation equaled loss, so net is zero).

There were some extraneous factors, but they don't change the dismal result: the now-ended Verizon strike took 45,000 jobs out of the private sector count in August, but going the other way, 22,000 Minnesota state employees previously shut out, went back to work.

Since monthly numbers can always jump around, it's important to average over a few months to get a feel for the trend. The figure below does that for payroll jobs. 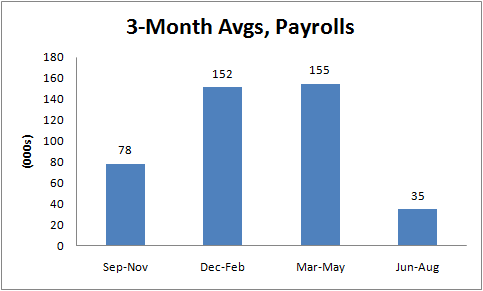 You can clearly see the deceleration in job growth. From Dec 2010-May 2011, we were adding around 150,000 jobs per month, not enough job growth to push down the unemployment rate, but about enough to hold steady.* But over the past three months, we're crawling along the bottom with 35,000/month. (Add in the factors noted above -- strike, end of shutdown -- and that number goes to 43,000... no real difference.)

Other points of note:

In sum, very weak labor demand, no matter how you cut it.

And there's a first dose of my colleague Chad Stone's analysis here.