My favorite course in college was one of the obvious and simple ones: Shakespeare. We read maybe 20 of the plays and talked about them. Our professor was an eccentric old Greek, Pete Phialas, who had been dragged out of retirement by a student of his. This student became a dentist and paid the school to keep Phialas teaching what had been the student's own favorite course. Phialas had a thick accent and a childlike, giddy love of Shakespeare. He approached the plays more as dramatist than psychologist or philosopher: what were the subtleties of interaction between these characters? What did these turns of phrase mean?

Here's a taste of his approach, which I remember some 21 years on. Consider part of the famous speech about England, Richard II, act 2, scene 1:

This royal throne of kings, this scepter'd isle,
This earth of majesty, this seat of Mars,
This other Eden, demi-paradise,
This fortress built by Nature for herself
Against infection and the hand of war,
This happy breed of men, this little world,
This precious stone set in the silver sea,
Which serves it in the office of a wall,
Or as a moat defensive to a house,
Against the envy of less happier lands,
This blessed plot, this earth, this realm, this England

It is a dazzling speech to consider on its own. But Phialas pointed out to us that in it, Shakespeare directed his actor in how to perform it. It is spoken by John of Gaunt on his deathbed. 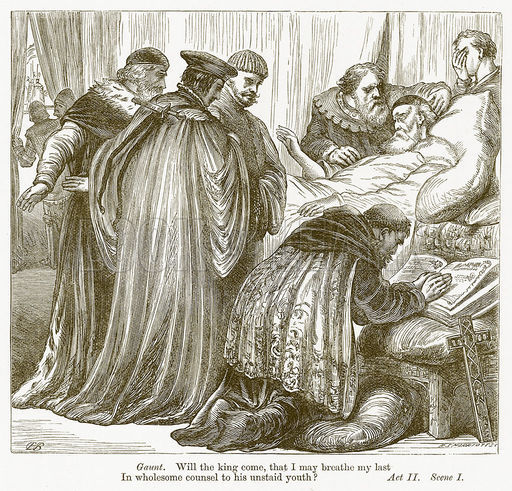 Each phrase is a breath. His breathing is uneven, and growing shallower - at first he can breathe out "This royal throne of kings" - but later, he has breath only for four syllables: "This blessed plot" - then shallower still, two syllables at a time - "this earth" - "this realm" - then inspired by his love of country, he summons the breath for an extra syllable: "this England."

Behold Phialas unlocking for his students a more complex appreciation of Shakespeare as dramatist: Shakespeare as a writer endlessly sensitive to the peregrinations of the human experience, and capable of distilling them down to the dramatic progression and the telling moment. These scenes have at their core the profundity of life, but at their surface they are dressed up full of color and excitement - they make it easy for us to enjoy them, they invite us in - they make it fun to learn the truth - a gift which, like Bottom's dream, hath no bottom.

At about this same time, I was looking at clouds a lot. The Shakespeare course provided me with a means to express something which had always seemed apparent: that while the lives of men are sometimes dramatic and meaningful, and often tedious and insignificant - so that, for instance, the 37 surviving plays of Shakespeare are a big deal in terms of the history of culture - the life of the sky is continuously Shakespearean. A great drama unfolds in the clouds, full of color and excitement. The clouds have majesty and variety, and they tell a complex and subtle story. This story has a cast of many characters, and divides up into scenes and episodes, but it has neither a beginning nor an ending. As long as there are vapor, light, and heat it will go on. We can read an act of Shakespeare any time we want, simply by looking up.

I don't come across my species of nephophilia - cloud-love - very often. But here we have Carolyn Marks Blackwood, a photographer who is apparently as avid a follower of the Bard of the upper reaches as I am, and a much more active one: she takes the drama of the clouds for one of her key subjects. Her show of photographs The Elements of Place is currently on display at the Albany Institute of History and Art - see details at the bottom. The work that follows is all from the show. 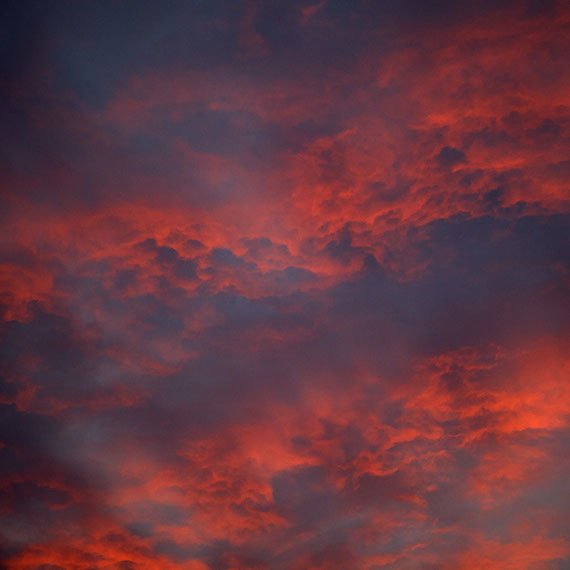 Now, this is embarrassing. I don't know the names of clouds. But whatever these clouds are, Blackwood composes them into a staccato landscape, diagonal bands of light stair-stepping from upper right to lower left. The light of the setting sun upon them is a violent red glow, like the light in a forge, and the clouds themselves look molten, as if they were boluses of hardened metal half-sunk in streaming iron. Seeming puffs of steam rise through the scene, and the eye seeks the cool blue shadows of the darker bands, scarcely finding any place to rest. The composition has little up or down to it, because it exists in the three-dimensional world of the clouds, unrestrained by a life spent crawling heavily on the surface of the Earth.

Since the advent of the digital camera, so many people are taking so many pictures that a good cloud photo can easily be chalked up to chance. Therefore we reflect on a body of work when considering cloud photography. 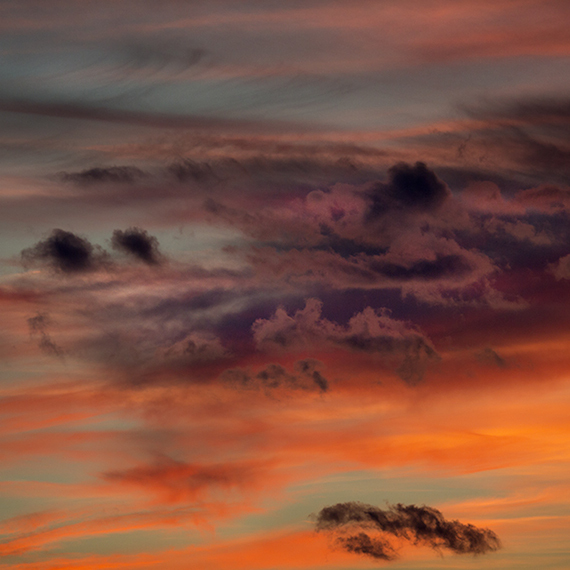 Blackwood encounters the sky in an utterly different mood here. The first image is martial and heroic. This one is less formally dynamic, but it is not relaxed - rather, it is poised. A backdrop cloudscape relates a straightforward tale in turquoises and peaches of day edging toward night. Foreground of it are unlit clouds, skulking along, Iago-like, staining the scene with threat. Foreground and background are in dramatic tension, and once again, they are lushly three-dimensional, moving through a space without bias. 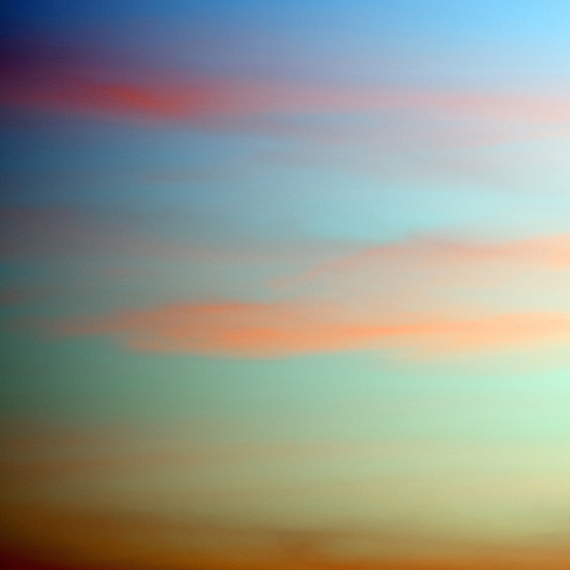 This is more akin to dissipation, dispersal. The clouds have lost their complex structure. They are spare and coming apart, making their way from form back to diaphanous vapor. The coiled energy of drama has been used up. The last few characters are making their way aimlessly from the stage, their lines exhausted. The scene returns to the beginning, to the blank page of the endless sky.

Let me insert here an apology for these descriptions; they read awkwardly to me. One encounters music and clouds the same way, as stimuli to the narrative imagination. But writing it out direct is like writing out a dream - stilted and unlike the thing itself. If this were a piece of fiction, I could hide Blackwood's clouds behind a magnificent cast of characters. But it isn't, and my speaking of the clouds directly fails - I do not have a language of clouds.

One might correctly argue that Blackwood is a consummate nature photographer. But this only captures part of what she is. She is a consummate photographer of abiotic nature. Living things rarely intrude on her work. Her nature is a nature of water, water in all its phases. 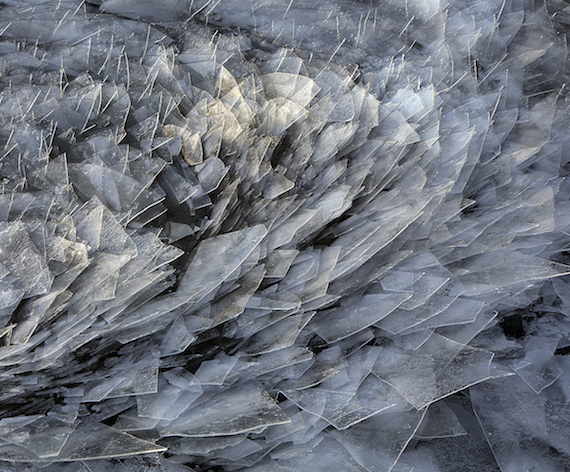 There is a serene majesty, an icy grandeur, to her outlook. It is indifferent not only to humanity, but to all things that live and die in organic form: to plants, to animals, to fungi and algae and bacteria. Blackwood's Earth is given over to the inscrutable vitality of non-living things.

I am haunted by a thought, that if one could only see the world in its proper proportions, then of course life would recede to a trivial rank in the order of things, and science would assume the place in one's heart that tragedy customarily occupies. The spin of the electron, the wheeling of galaxies: these would take their rightful places at the center of one's attention. The heart and attention themselves would begin to dissolve, borne aloft on a wave of awe, and one would enter into direct unity with a vast cosmos. This cosmos would not be merciless, because mercilessness implies a certain caring about the thing denied mercy. This vast cosmos would be incidentally merciless, inconsistently merciless - it would hurt only because it would not care. The contours of its values would be alien to human conception. The first, and possibly only, thing we could understand about this cosmos before leaving humanity behind would be its tremendous beauty, beauty in every facet from the austere to the spectacular to the voluptuous.

The Bard of the upper reaches tells a tale of Shakespearean excitement, but it is not a human tale. 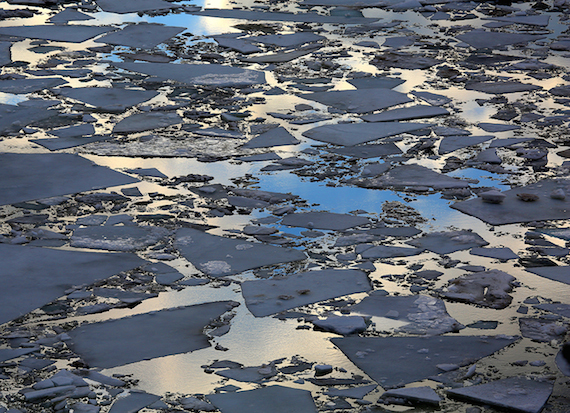 I get a hint of this absolute cosmos from Blackwood's photography. Looking at it, I conceive of her as being like a nineteenth-century explorer, steely, hardy, loving to live but not fearful of dying. I think of her with her face half-hidden behind tremendous lenses, surveying her chosen landscape of unspoiled solitude to distant horizons. It is cliched by now to imagine that a perspective which so thoroughly excludes humanity forms in recoil from some tremendous personal pain. One is tempted to manufacture such a biography for the Blackwood one deduces from her work. But I don't know, first of all, if Blackwood is the explorer I take her for; nor do I know if she harbors some such pain. I don't personally believe the a-human perspective is necessarily born in grief, nor can I verify that this perspective is hers. I think it exists to some extent in all of us, and I suspect she unleashes her measure of it in her nature photography, which is only a part of her creative work. I know one thing about this work, because I asked: that she shoots most of it at or near her home on the Hudson River.

Therefore I learn, or re-learn, two things from her work.

The first is that, whatever the real Blackwood is like, I need somebody to be like my idealized explorer, and her work comes close enough to this lost ideal that I can justify my construction of her. My Blackwood is not the fearful Bard, but she is his authentic follower. I need the figure and the work alike, and this is part of why her photographs mean so much to me.

The other thing I find is closer to home, a more ordinary but very useful truth: that if you are willing to walk out the front door and look at the world right in front of you, and really study it for a while, then splendors will unfold. This is what we get from the domestic Blackwood, the Blackwood who shoots where she lives. Surely she lives someplace nice, but it would be vague and drab before a less passionate eye. Only half its magic is itself, and the rest is her.

Carolyn Marks Blackwood online
All images courtesy of the artist
except Richard II scene, via http://theplaystheblog.wordpress.com/2012/05/22/what-dies-with-john-of-gaunt-nothing-less-than-a-vision-of-the-world/