Do you know the difference between the kind of cherries you'd eat vs. the ones you should bake or cook with? There are many varieties of cherries, all in different colors, but cherries are basically broken down into two groups: sweet and tart. That distinction may seem minimal but it's really important to realize and know when it comes to baking or cooking with cherries, since there are some things you will need to take into account -- or you might end up with a runny pie that tastes wincingly sour.

Don't get us wrong, you can bake with any cherries you wish, but if you're looking for that characteristic cherry pie recipe, there's only one type of cherry you should be using -- and that's sour (or tart) cherries. 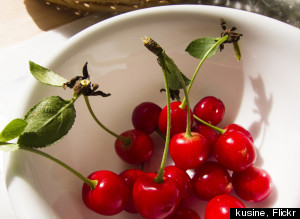 Sour cherries are actually pretty sour on their own. Some people can tolerate eating them, but they're really best for baking into pies and tarts or cooking into jams or relishes. The cherry pies you'd buy in the supermarket or the cherry pie filling you buy in a can are made from sour cherries. Generally you won't find fresh sour cherries in the supermarket, so instead try the farmer's market. Sour cherries are bright red in color and have an almost perfectly spherical shape. They're also very juicy, so you will want to use starch to thicken their liquids when you're baking a pie. And of course, since they're tart, you'll need more sugar than you would if you were using sweet cherries. 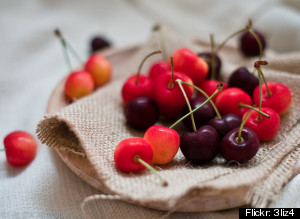 Sweet cherries are fine for baking, too (you wouldn't need as much sugar or starch), but they're really meant to be eaten out of hand. Sweet cherries are large, firm and heart-shaped. You'll typically find two varieties sold in the supermarket: the dark red Bing and the blushing pink and white Rainier. The Rainier tastes sweeter than the Bing but that's because it's also less acidic.