The Natural History Museum, London owns an exhibition called Wildlife Photographer of the Year. This prestigious international wildlife exhibition started in 1964, and is held annually. 42,000 photographs from 96 countries were submitted to the 2016 international competition; only 100 of them were selected for the exhibition. The imagoes exhibited in the 2016 touring exhibition are the winning 2015 images.

The competition includes a wide range of categories, such as "birds," "amphibians," "fish," "in the sky," "plants" and "urban." Millions of people from various countries come to visit this touring exhibition every year. After exhibiting the photographs throughout the UK, the exhibition hits the road. The 2015-2016 exhibition is scheduled to be displayed in no less than 35 other locations around the world.

The 2015 photograph of the year, "A Tale of Two Foxes", relates to global warming, depicting a common fox devouring a snow fox.

"A picture is worth a thousand words" - here are some of the pictures displayed in the 2016 Wildlife Photographer of the Year exhibition. I thank the Natural History Museum, London for providing me with the photographs and their descriptions, and giving me their permission to publish them here and I thank Mrs. Zoë Stanton, Interim Communications Officer, Wildlife Photographer of the Year, for her help. 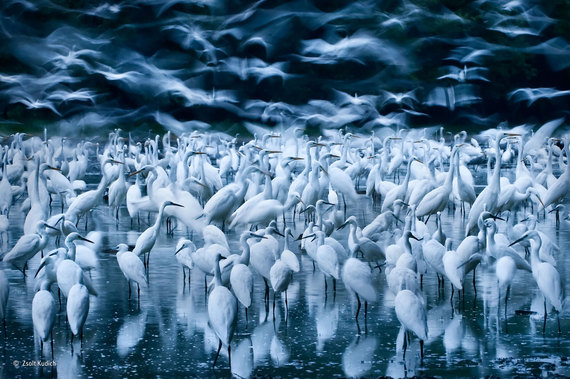 When the River Danube flooded, this temporary lake attracted more than 1,000 great egrets. Over five nights, Zsolt photographed them in a soft dawn light. Using a slow shutter speed and large depth of field, he captured the moment some white-tailed eagles disrupted the egrets' peaceful feast. In the late 1800s and early 1900s, great egrets were significantly threatened by hunting, their spectacular breeding plumes desired for hat decorations. Following legal protection, populations have recovered - in Hungary, from 31 mating pairs in 1921 to now more than 3,000 pairs. 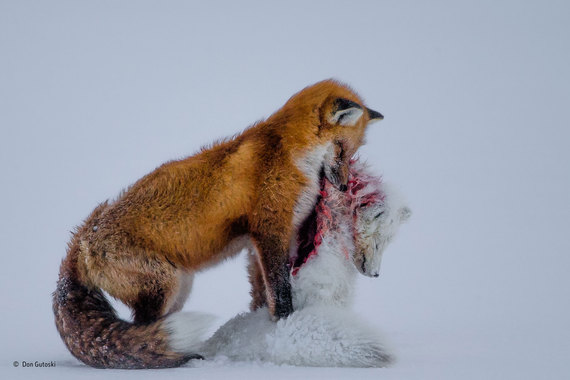 From a distance, Don could see that the red fox was chasing something across the snow. As he got closer, he realized the prey, now dead, was an Arctic fox. For three hours in temperatures of -30 degrees Centigrade Don stayed at the scene, until the red fox, finally sated, picked up the eviscerated carcass and dragged it away to store for later. In the Canadian tundra, global warming is extending the range of red foxes northwards, where they increasingly cross paths with their smaller relatives, the Arctic fox. For Arctic foxes, red foxes now represent not just their main competitor - both hunt small animals such as lemmings - but also their main predator. Few actual kills by red foxes have been witnessed so far, but it is likely that conflicts between the two mammals will become more common. 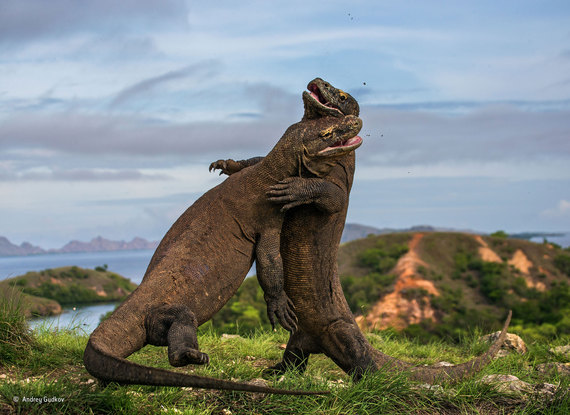 Two formidable Komodo dragons wrestle along the majestic coast of Komodo National Park. Andrey had visited many times, hoping to capture the spectacular fights between males during the summer breeding season. After several fruitless attempts he returned in December and witnessed this unexpected hilltop battle. 'It was an unforgettable show', he recalls. Weighing up to 150 kilogrammes, with huge claws and serrated teeth, Komodo dragons rear onto their hind legs to wrestle. In this case it was likely a territorial dispute. These formidable competitors have a protective outer layer, their scales reinforced with tiny bones, which acts like natural chainmail. They are the world's largest lizards. 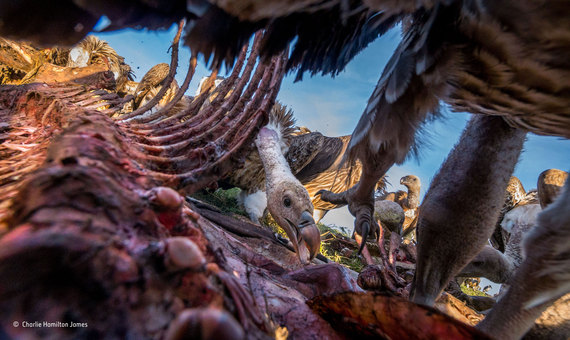 Charlie wanted to capture an African vulture feeding scrum from its centre, so he positioned a specially adapted camera inside multiple carcasses. After three weeks and thousands of photographs 'this was the only shot that worked,' he says. The low angle captured the action as these endangered Rüppell's and white-backed vultures gorged on carrion and bone. Vultures use cunning tactics to locate carcasses, which include looking for behavioural cues from other vultures. They also keep an eye out for eagles, which are more likely to spot a kill first, following them to the carcass, tucking in once the sharpbeaked eagles have made the first incision. 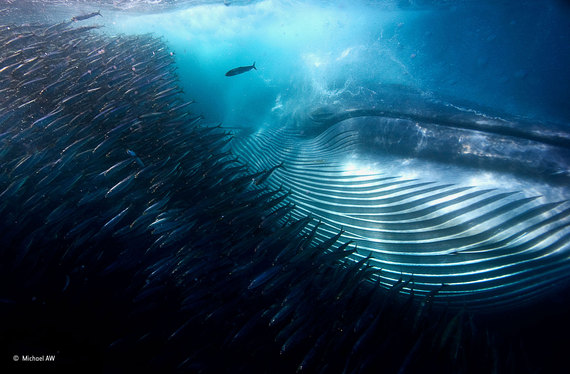 A whale of a mouthful by Michael AW, Australia. Winner 2015, Underwater.

An imposing Bryde's whale rips through a mass of sardines, gulping hundreds in a single pass. Photographing this feeding frenzy was a real challenge for Michael. Already knocked clean out of the water by whales on two occasions, he just managed to stay out of the way during this encounter. This scene happened during the annual sardine run, when billions of sardines migrate along South Africa's Wild Coast, attracting predators such as gannets, dolphins and sharks along the way. Bryde's whales are among them. This species tends to exploit the activities of other predators, swimming through and engulfing the fish they have herded. 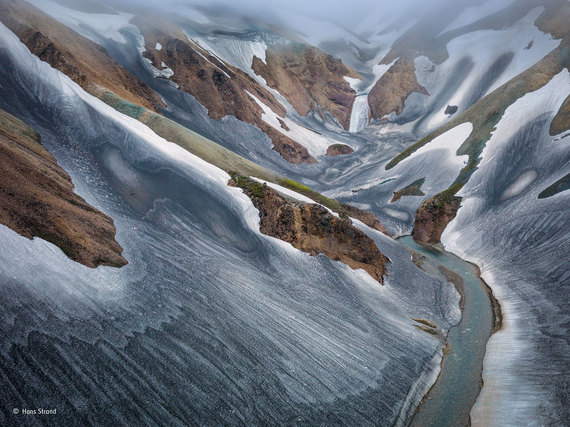 Flying through heavy drizzle, Hans came across this 'fairytale landscape' as he recalls. The ice-fields and glaciers lining the flanks of the mountains were stained grey with ash, recording in glorious textural detail the slow movements of snow and ice, like a gigantic charcoal sketch. The fine ash may have settled here after being carried on the wind from a volcanic eruption elsewhere. Iceland is famous for its high concentration of active volcanoes, which have been responsible for a third of the world's total lava output in the past 500 years. 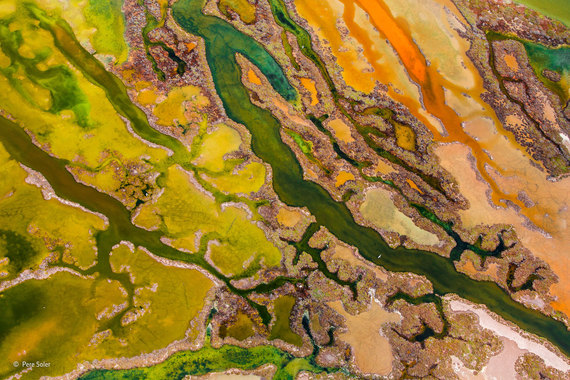 The art of algae by Pere Soler, Spain. Winner 2015, From the Sky

This park is famous for attracting huge flocks of migrating birds. Pere was there for the birds, but also for another spring phenomenon, only fully visible from the air. In late spring, parts of the marshes burst with intense colour, creating a rich tapestry of textures and patterns. As the temperature warms and the salinity changes, the wetlands see the bright green of seaweed mix with a multicoloured microalgae bloom. White salt deposits, brown and orange sediments coloured by sulphate-loving bacteria and iron oxide add to the riot. The full display usually lasts only a few weeks in May or June. 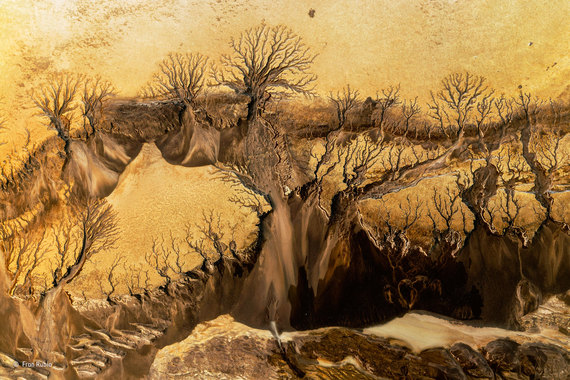 There is magic in mud. As Fran watched the glacier's meltwater filtering through a patch of it, trunks, branches and twigs slowly formed until an entire forest appeared. He waited for the right light so the 'trees' would appear to magically stand up, as if out of a child's pop-up picture book. Trees are a rare sight in Iceland's landscape. The Vikings in the ninth century deforested much of it, creating the country's barren wilderness. Today, a rise in temperature linked to climate change has contributed to the arrival of new tree species in the southern parts of the country. 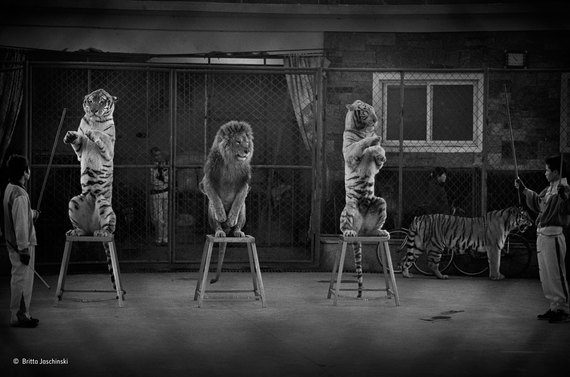 Locked into obedience by their trainer's gaze, big cats perform at the Seven Star Park in Guilin in 2012. The cats have been drugged, their teeth and claws pulled out, and they are controlled during the show by poles with metal spikes at the end. Audiences are often unaware of the level of cruelty involved. 'This was truly an arena of broken animals', Britta remarks. These cats are probably all hybrids of captive-bred animals. The one in the centre is most likely a liger - a cross between a male lion and a female tiger. Ligers are thought to be the largest living felines, tending to exceed the size of both their parent species. 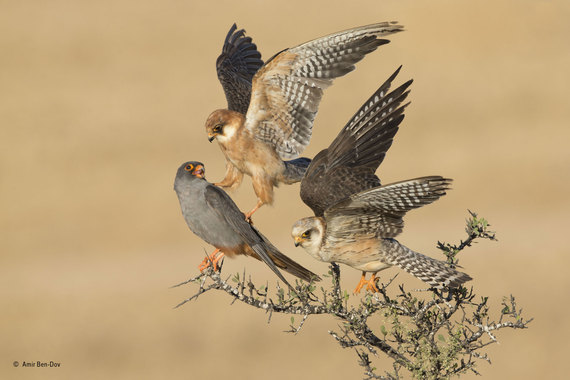 1st prize - BIRDS- Wildlife Photographer of The Year London's Museum of Natural History and the- BBC.
Amir Ben-Dov
ISRAEL
Red-footed falcons are social birds, migrating in large flocks from central and eastern Europe to southern and southwestern Africa. The closest relationships seem to be pairs or parents with first-year chicks, but otherwise, they maintain a degree of personal space. But these three red-footed falcons were different. Amir spent six days watching them on agricultural land near Beit Shemesh, Israel, where their flock was resting on autumn migration, refuelling on insects. What fascinated him was the fact that two subadult females and the full grown, slate-grey male were spending most of their time together, the two females often in close physical contact, preening and touching each other. They would also hunt together from a post rather than using the more normal hovering technique. As so often happens in photography, it was on the last day in the last hour before he had to return home when the magic happened. The sun came out, the three birds perched together, and a subtle interaction took place: one female nudged the male with her talon as she flew up to make space on the branch for the other female. Exactly what the relationship was between the three birds remains a mystery.