If you're voting for Hillary Rodham Clinton because you think it's time a woman attained the highest office in the land, understand that HRC sees herself in the tradition of Golda Meir.

HRC:... some of us remember a woman, Golda Meir, leading Israel's government decades ago and wonder what's taking us so long here in America?

This effort at charming disingenuousness was greeted with laughter and applause by the AIPAC audience she spoke to today.

If you're a progressive in the way Hillary now claims the term, perhaps you might not be too troubled by HRC's comfort in aligning herself with Golda Meir, a Zionist who spoke of "a land without a people for a people without a land." This club included the likes of Newt Gingrich who spoke of the Palestinians as an "invented" people in his failed effort to pander his way to the presidency.

But I am running ahead of myself. Playing coy with Zionists like Golda Meir came towards the end of her appalling speech to AIPAC. (It did once again call to mind HRC's boast that Henry Kissinger gave her a great report card as Secretary of State. Which progressive would ever want that seal of approval?)

There was much more that should give progressives pause before HRC's homage to Golda Meir, and the linkage to her own run for the White House.

Her empathy is selective.

HRC is apparently unaware that this is how Palestinian children walk to school.

But she described in graphic detail today the suffering of Israeli men and women with whom she has sat in waiting rooms. Apparently she has not heard of, or encountered, the suffering, pain and the massacre of Palestinians, including innocent children, by the Israeli army.

If you're voting for HRC because you see her as an Obama loyalist who will protect and build on his legacy, you need to know that this was one of her promises to AIPAC attendees:

HRC: One of the first things I'll do in office is invite the Israeli prime minister to visit the White House.

If you are voting for HRC because you think she will help bring a just peace to the Middle East, and help end the apartheid policies of the Israeli government, here is what she promised today:

HRC: I will make a firm commitment to ensure Israel maintains its qualitative military edge. The United States should provide Israel with the most sophisticated defense technology so it can deter and stop any threats. That includes bolstering Israeli missile defenses with new systems like the Arrow Three and David's Sling. And we should work together to develop better tunnel detection, technology to prevent armed smuggling, kidnapping and terrorist attacks.

And I will send a delegation from the Pentagon and the joint chiefs to Israel for early consultations.

If you support the Boycott, Divest and Sanction effort as a peaceful way to end the illegal Israeli occupation, and continuing oppression of Palestinians, you should know that today HRC likened BDS to anti-Semitism.

HRC: Many of the young people here today are on the front lines of the battle to oppose the alarming boycott, divestment and sanctions movement known as BDS.
Particularly at a time when anti-Semitism is on the rise across the world, especially in Europe, we must repudiate all efforts to malign, isolate and undermine Israel and the Jewish people. I've been sounding the alarm for a while now. As I wrote last year in a letter to the heads of major American Jewish organizations, we have to be united in fighting back against BDS.

If you're voting for HRC because you think she will be an honest broker and deal fairly with all transgressors, you should know that she is silent on what should be done to punish Israel for its ongoing land grabs and violations of international law and UN agreements. By contrast, she is completely clear that Tehran must be punished, and swiftly, if it does not live up to ALL the terms of the recent nuclear agreement:

HRC:. . . there's a big difference between talking about holding Tehran accountable and actually doing it. Our next president has to be able to hold together our global coalition and impose real consequences for even the smallest violations of this agreement.

Accountability, done the HRC way, might best be described as different strokes for different folks. At a minimum we should take the same approach to her candidacy that she recommends for the Iran nuclear agreement: distrust and verify. Too much is at stake to simply rely on the ever-shifting politics of her performance. 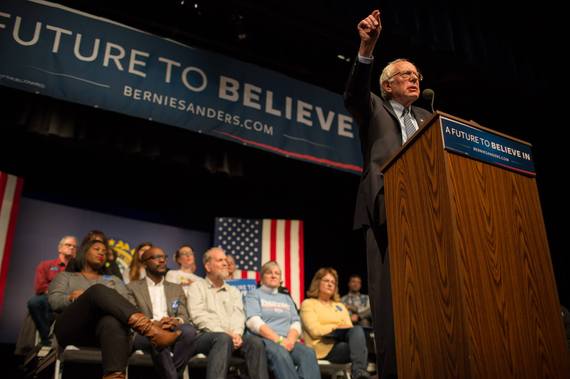 Bernie Sanders chose not to attend the AIPAC conference. He has promised a "level playing field" on Israel and Palestine.