Will Coley is many things.

He's a small businessman--he sells silver coins and other free-market Milton Friedman type shwag at various Libertarian events across the country--he's a father of 7, with 1 on the way, and he is a political activist.

He's also a devout Muslim, and has been for a decade.

Will is a staple of the Libertarian community, and national director of Muslims4Liberty. 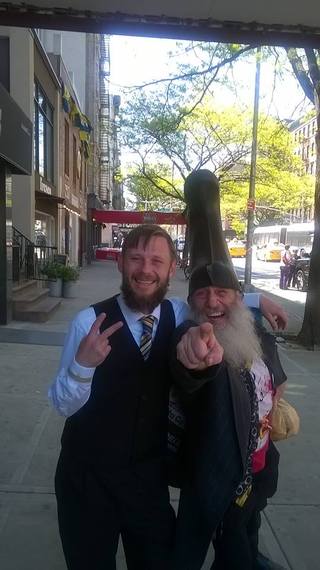 Like Vermin Supreme, pictured (with Mr. Coley) above. Vermin's a perennial protest candidate and a performance artist perhaps best known for running for president in 2012 on a Zombie-Apocalypse preparedness ticket.

If you just thought these Libertarians are so fringe it's kinda hard to take the whole thing seriously, you'd be right.

And Will Coley is about as fringe as they come. He is the wingnut used to fasten the other wingnuts in place.

He is an unheard of idealist existing in the far outer reaches of American political thought.

And now he's on the Libertarian ballot, and contesting the 2016 Presidential Election.

Through a fluke of Libertarian Presidential politics, Will is running for Vice-President as the preferred running mate of Darryl W. Perry--a Libertarian Presidential candidate, and a character all unto himself. There is an unnecessarily confusing reason behind this, not worth discussing when we as a nation can barely understand the nominating processes of those parties which might actually win the Presidency--but the point remains.

Will Coley is a Muslim, and he's on the ballot of an official American political party.

This is, in it's own obscure and odd way--a historic first.

In fact, obscure third parties have a history of presaging our future politics.

And to my very liberal chagrin, this wouldn't be the first time the Libertarian Party themselves have broken political ground the rest of the country wouldn't consider stepping on until decades later.

In 1972 John Hospers and his running mate, Tonie Nathan, simultaneously became the first openly gay man--and the first woman--to receive a vote in the electoral college.

They did this when Roger MacBride, a Republican delegate, defected from the GOP and endorsed the Libertarian ticket over his own party's nominee--Richard M. Nixon.

The Libertarians would reward Mr. MacBride for his startling decision with their party nomination four years later.

Will Mr. Coley become the first Muslim Vice-President of the United States?

But will his official place on that official ballot in an official election serve to cut the very beginnings of a path for some future political aspirant--like George Edwin Taylor, or Tonie Nathan?

Enough of a shot to warrant these 600 words and the hours worth of reading I had to do to discover who the hell Darryl W. Perry is.

And while I'll never consider myself a libertarian--I like public schools too much for that--I can get behind a person whose candidacy breaks down barriers and fosters understanding across political lines.