Take jobs for example. This week, the International Renewable Energy Agency (IRENA) released its 2015 renewable energy and jobs report finding that 7.7 million people are now employed by the sector worldwide, up 18 per cent from the number reported last year and up 35 percent over the last two years. If you add large hydropower to the mix, you get a conservative estimate of an additional 1.5 million direct jobs worldwide. 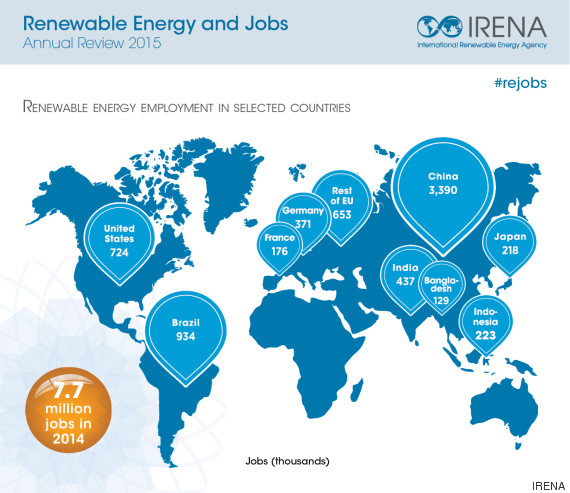 While the bulk of employment is found in a relatively small number of countries, more and more countries are deploying renewable energy and creating jobs. Plummeting prices for renewable energy technologies are also triggering capacity additions and driving more jobs in installation and operation and maintenance.

Solar PV is the largest renewable energy employer with 2.5 million jobs worldwide, up from 2.3 million at last count. According to IRENA's 2014 renewable energy costs study, solar PV module prices have dropped more than 75 per cent since 2009 and residential solar PV systems are 65 per cent cheaper than in 2008. In an auction this year, Dubai contracted for the lowest-ever price of electricity from a solar park, without financial support, at less than US 6 cents per kilowatt-hour (kWh). 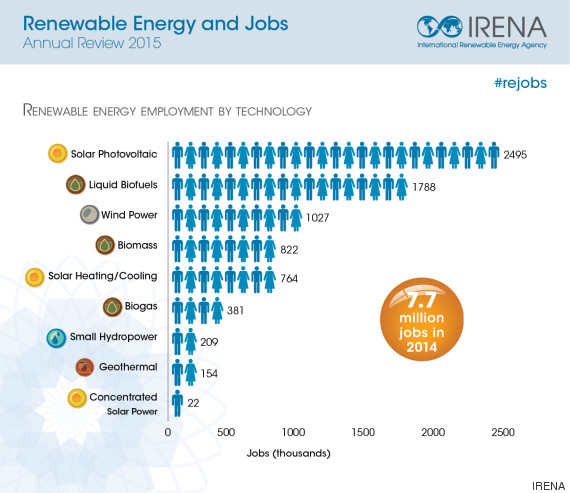 Wind is another example where falling costs are creating new jobs. Employment in wind energy passed the 1 million jobs mark, up from 834,000 at last count. Onshore wind is now one of the most cost-competitive sources of electricity available with some projects now delivering electricity for as little as US four cents per kWh, again without financial support.

The new reality is that the cost of generating power from renewable energy sources has reached parity or dropped below the cost of fossil fuels for many technologies in many parts of the world. Biomass, hydropower, geothermal and onshore wind are all competitive with or cheaper than coal, oil and gas-fired power stations, even without financial support and despite falling oil prices. These low prices are making the business case for renewable energy stronger than ever.

Renewable energy is not just about saving the environment any more. It is now also about stimulating the economy, creating jobs, generating new sources for growth, increasing income and improving trade balances.

Yes, doubling the share of renewables to 36 percent by 2030 could prevent nearly 9 gigatonnes of carbon emissions, contributing significantly to the efforts to stabilize the climate. The technologies are already available to achieve this objective and world leaders have recognized the importance of renewable energy and the phasing out of fossil fuels in keeping global temperature rise below 2 degrees Celsius.

But, the real story in this new era of renewables is that doing so is actually cheaper than the alternative when factoring in social and environmental costs. What's more, if we succeed in doubling the global share of renewables, IRENA predicts that jobs in the renewable energy sector would easily exceed 16 million jobs by 2030.

In a world recovering from an economic crisis and stressed by high unemployment rates, this job creation potential is an important consideration for policy-makers. World leaders must develop forward-looking approaches to train and educate people to fill these new job vacancies and policies must be adopted to maximize renewable energy job creation. This entails developing a supportive policy mix that governs deployment, trade, investment, research, education and regional development.

For example, the Modi government in India has adopted an ambitious vision for renewable energy development over the next few years. If the right policy mix is enacted and the government reaches its goal of installing 100 GW of solar PV and 60 GW of wind, it will generate more than 1 million much needed jobs by 2022. In the US, declining technology costs and enabling policies have already resulted in a 22 per cent and 43 per cent increase in solar and wind power employment respectively over the past year.