I think Nate Silver deserves a lot of credit for being one of the few "poll readers" willing to forecast a numeric probability of Obama's win before Election Day even started, and getting darn close. However, I'll withhold credit from many popular analysts who are ignoring the significant role race and ethnicity played in Obama's win. Throughout this election, race has been the elephant in the room, and the inability to discuss its effects will likely endure if we continue to mollify it's chronic role in American politics.

SPOILER: This is not an article about women, it's about data.

There have been several headlines about how women, young voters, and even Catholics led the way for Obama. However, it wasn't the youth, female or any aspect of the religious vote that we should credit; it was the African American and Latino vote. As it stands, no other poll measure (aside from political party) explains as much variance in the election outcome than race and ethnicity; not, the opinions on the economy, not health care and not foreign policy.

Just to clarify I'm not saying that the votes of any one group are irrelevant; certainly, any substantive proportion of a voting block could arguably be the deciding factor for an election victory. Yet, those groups who comprised a majority of Obama's support were driven by African American and Hispanic voters, the former of which was NOT expected to turnout at levels near those in 2008.

First, let's deal with so-called gender gap. The exit polls conducted on Election Day shows that Obama won female voters by an 11 point margin, 55 percent to 44 percent, over Romney. The data also show Obama lost white voters by 20 percentage points, 59 percent to 39 percent, but won a majority in every other racial-ethnic minority group.

When the data are broken down by gender and race the results show that only minority women voted in the majority for Obama, white women mostly voted for Romney. See Figures 1a and 1b below. 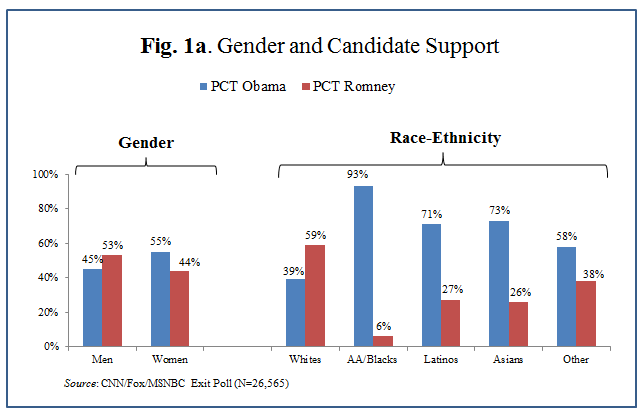 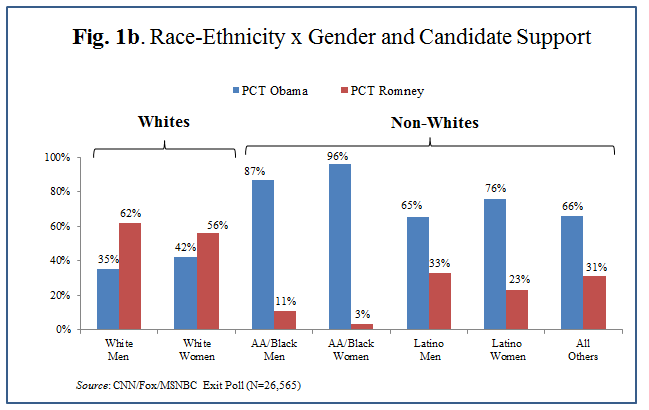 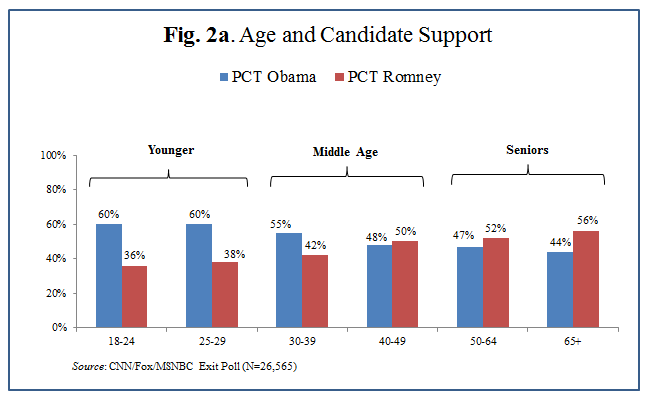 When these results are broken down by race the sample sizes get smaller for African Americans and Hispanics and, for comparisons sake, the younger age groupings have to be combined, but Obama's younger voter advantage is still based on race and ethnicity rather than age itself. See Figure 2b. 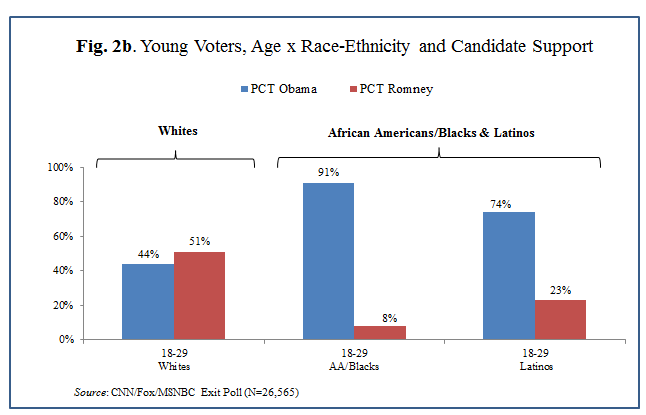 One additional finding from exit polls was that Obama won the Catholic vote over Romney 50 percent to 48 percent. There were no detailed data for all racial-ethnic groups by religious affiliation, but there were some results presented for white voters by denomination. These results show that a majority of white Catholics (59 percent) voted for Romney, while only 40 percent voted for Obama. Hispanics are largely Catholic, and African Americans have relatively large Catholic segments in parts of the United States; it appears that these groups explain the Obama Catholic advantage as well. See Figure 3, which shows Obama support for each religious group and his support among white voters in each religious group. 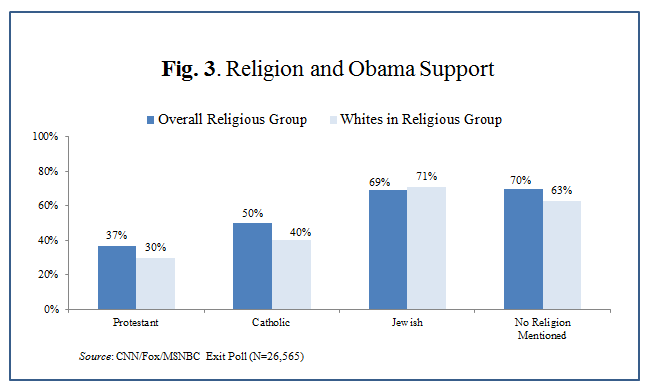 Across the board, among women, young voters and even Catholics, the pro-Obama advantage was due to higher turnout among, and support from, racial minority groups. These very basic points call into question what the 2012 election was really about: Was it about the economy, or was it really about the "type" of leadership desired by a new coalition of American voters largely consisting of progressive but not necessarily "liberal" thinking and acting racial minorities?

During the election cycle, white voters comprised the largest proportion of poll respondents, and these polls signaled the economy was the public's chief concern. Together, African Americans and Hispanics comprise about 28 percent of the U.S. population, but typically make up less than 20 percent of poll respondents (unweighted), and less than 15 percent of a poll's "likely voters."

Perhaps the pre-election polls did not adequately capture (i.e., coverage error) the views of African Americans and Hispanics, leading some to make overstatements about what really matters to voters... I'm talking about "what" makes voters enthusiastic... I'm not talking about the topline result of a single question in a poll. After all, African Americans and Hispanics are among the worst off groups in the economy and their consensus was for Obama.

Consider the economic concerns about unemployment. While many have condemned the near 10 percent unemployment rate (unadjusted by season) for the U.S. during the Obama administration, that rate has been over 10 percent for African Americans and Hispanics since March and November of 2008, respectively. Today, the unadjusted unemployment rates for African Americans and Hispanics are 13.8 percent and 9.7 percent, respectively. The unemployment rate for white Americans has yet to surpass 10 percent for this century, and actually dropped 1 percentage point over the past year from 7.6 percent in October 2011 to 6.6 percent now. That's a 93.4 percent "employment" rate; never mind the issues with people dropping out of the labor force because they are likely higher for racial minorities, as well.

These race-ethnicity by unemployment patterns are the same when you look at the data for young people (18-29), but the numbers are much larger. Thus, even among the age groups with the highest unemployment rates, Obama outperformed Romney, but only when one controls for race and ethnicity.

So, the economy mattered, but not in the way that many assumed. It appears the coalition of support for Obama was built around trust in leadership rather than simply getting a job. Straightforwardly put, a majority of voters just liked Obama more than they liked Mitt Romney.

Maybe there's more to the story -- we'd need the actual exit poll data to go further -- but one thing is for sure, those who put Obama over the threshold for his win were racial and ethnic minorities and not simply the broad segments like women, young voters, and other ignored groups being reported by many in the media this week.