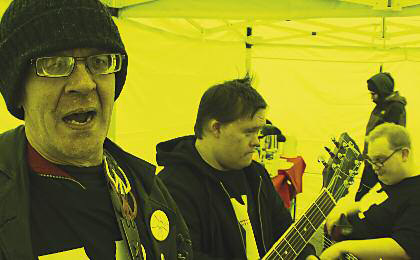 "I need a little respect and dignity in my life!" screams out a Finnish punk rocker with cerebral palsy, member of a band of mentally handicapped musicians. This line, from the documentary The Punk Syndrome, could be the refrain of many of the films that screened at the recent Thessaloniki Documentary Film Festival in Greece, now in its 15th year. From the Greek Rough Cut, which honors a transexual Filipino hairdresser cum dance teacher raising "her" daughter by Skype in the Philippines, to Janusz Mrozowski's Bad Boy: High Security Cell -- two hours in the life of a man condemned to solitary confinement -- the films this year gave respect to those "others" considered marginal.

Polish director Janusz Mrozowski, for example, spent 12 hours a day for two weeks in solitary confinement with 28-year-old former bank robber Damien. We are right there in the cell as the young man explains, with a grin, how he has learned to masturbate freely in front of surveillance cameras. We are trapped behind the walls as Damien paces like a caged animal in the exercise "cell" for his allotted daily 20 minutes of exercise. The claustrophobia of the daily routine becomes our own -- to the point that I squirmed in my seat. "I don't want you to see the criminal," Mrozowski explained to me later, as we spoke in the sparkling (and wide open) lobby of his hotel. "I want you to see your brother." We are relieved when Damien is transferred to a cell with a window on a tree. 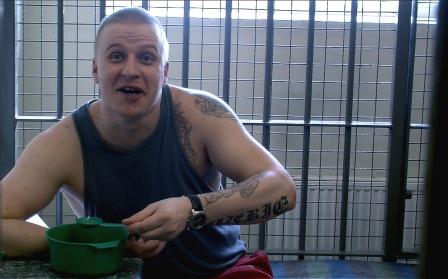 The work of famed Chilean director Patricio Guzman, the director honored this year with a tribute, is also about giving dignity. His powerful documentaries excavate the buried history of those tortured and killed under the Pinochet dictatorship. "Memory matters," Guzman argues. "It may be terribly painful to speak of terrors and tragedies of the past. But the truth inspires hope, and that inspires the will to change."

Case in point: his The Pinochet Case, uses archival material and interviews to express historical facts that even the current Chilean government does not acknowledge. In an opening and closing shot of the film, the camera pans slowly on the faces of those who suffered from Pinochet's regime, resting on the eyes, the cheeks, the lips of women and men who have lost children, brothers, husbands, parents. One interviewee, Victoria, tortured for years in the "Villa Grimaldi" detention house, tells us how the worst torture is to witness "someone tortured next to you, while not being able to do anything." She recounts in a broken voice how she was forced to watch a 21-year-old Yugoslavian boy being beaten to death with chains: "His body was so healthy that it took him many hours to die."

Guzman's need to give witness -- a need echoed in so many of the films of the festival -- was most beautifully expressed in his award-winning Nostalgia for the Light, which compares astronomers searching for stars in the Atacama Desert, where stars are most visible, to women searching for the bones of their murdered husbands and children, buried in the same desert. "It is the same calcium in the bones and stars," we are reminded. Both the scientists and the grieving parents are searching for evidence of our historical past. "The stars remind us that we are all part of a cycle."

But not all the films were about giving dignity to the buried "other." Many were on the political and environmental catastrophes in our midst. Dylan Mohan Gray's Fire in the Blood is a suspense drama about how activists took on the pharmaceuticals in the 1980s, in an effort to make low-cost AIDS drugs available to dying AIDS victims in Africa. We learn how aggressive the pharmaceuticals are in protecting their profits -- and that their alibi that they need these profits for research is absolutely false. Only 12 percent of profits go towards R@D; the rest to marketing and executive salaries. The film is exceptionally impactful with its range of interviews over four continents, including several with a former Pfizer ex-vice president who boldly states how "health" is the last concern of pharmaceuticals. The most heart-rending interviews are with a South African activist who refused to take his own AIDS medication until all patients would have the same access he has to the drugs. His face becomes splotchy with scabs; he weakens... but eventually, with persistent efforts -- and the stunning surprise move of Indian pharmaceutical chairman, Yusuf Hamied, who offers to make the AIDS cocktail available for less than one dollar a day -- the activists win. 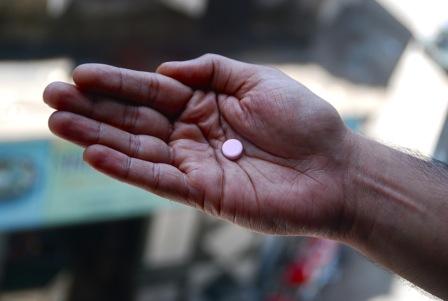 Daniele Vicari's Italian film The Human Cargo reveals that even warm and friendly Italians can be absolutely horrific when dealing with those foreign to their territory. His film takes on the 1991 case of the 20,000 Albanians who hijacked a boat to Italy, and shows how the government of Bari greeted these poor immigrants. They locked them up in an empty football stadium, and threw them food and water over the walls -- until they eventually shipped them back. 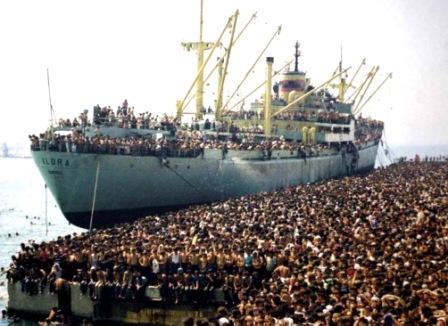 For a more cheerful and adventurous look at disasters: there is Daniel Dencik's The Expedition to the End of the World about a group of eccentric scientists and artists who sail off to the melting ice massifs in Greenland, to spend a few months exploring this uncharted territory. We listen to their eclectic musings on the destruction of the planet, as polar bears climb over the rocks in the gorgeous watery background. One scientist amusingly notes that we are foolish to worry about climate change. "Life and earth will survive us. We are a short parenthesis." Besides we should not "cling" to our current environment; it is a rule that every species has to adapt to the environment that it itself caused. "If everything melts, we invade Switzerland and go high in the Alps!"

To satisfy prurient curiosity in gruesome crime, we also have a few films on spectacular murders. One classic hit is the French In Search of the Papin Sisters, about two infamous maids in the 1930s who chopped up their patron and her daughter, and gouged out their eyeballs, throwing one in the stairwell. Sixty years later, film director Claude Ventura embarks on a mission to find out who these sister were. Structured like a suspense detective thriller -- with scary music to boot -- the film teasingly does not get to any great revelations about these two deranged sisters (except for the surprise last shot) -- but it is impossible to resist the dramatic pull. 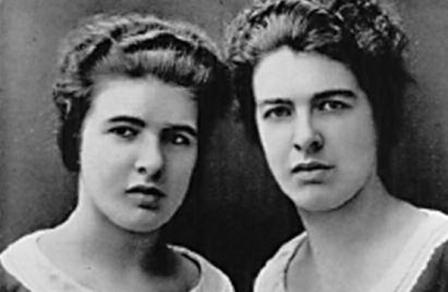 A less successful crime story is the Anatomy of a Murder, where the Dutch director, Joop van Wijk, goes on the trail to find out why his brother-in-law hacked his sister-in-law to death in her bed, while their two toddlers were sleeping downstairs. It is a gruesome story of depression -- with the most inspiring scene, for me, being the final interview with the adoptive mother who took in the two bereft children and gave them the love and home they needed.

My two favorite films of the Thessaloniki Documentary film festival this year: The Act of Killing, by Joshua Oppenheimer, Christine Cynn and an anonymous Indonesian director, and Beatrix Schwehm's Hungry Minds.

In The Act of Killing, former death squad leader Anwar, responsible for having tortured and murdered over l000 people with his own hands, following the 1965 military coup in Indonesia, is asked to re-enact his crimes on film. Anwar, dapperly dressed in yellow sneakers, snazzy cowboy hat, and green shirt, eagerly agrees to do so. He is very jolly as he explains how he twists a wire around a person's neck, and then yanks it. He gets his family members -- even his grandchildren -- to play-act in his scenes of torture. "How do I live with this?" he says, very jolly. "I do a little dance, smoke a little pot, listen to some music."

Indeed, Anwar seems thrilled to make this film, which once again puts him in the lead role. He proudly says that some of his acts of torture were more shocking than those of a Mafia flick, and adds that he imagines himself as even more dashing than the heroes of his favorite genre films: Westerns and gangster flicks. The scenes he "co-directs" in this film cover the gamut of these popular genres, even musicals. Act of Killing begins with a musical scene of beautiful Indonesian women in white skirts dancing on a green field before a waterfall -- and ends with the same scene, with the amateur actors playing the tortured dead thanking Anwar, in crooning song, for sending them early to heaven. 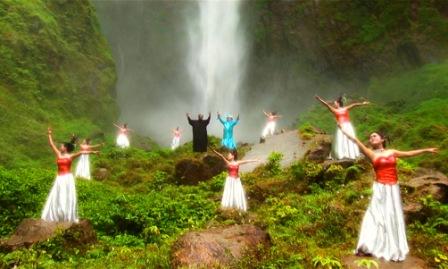 It's a film that provokes questions about the reality and unreality of horror -- and above all the ability to have no conscience or suffer repercussions for evil.

My one objection to this masterpiece: I did not like the fact that by sitting and watching this film I gave Anwar another two hours of attention.

My other favorite film: Beatrix Schwehm's Hungry Minds, an inspiring look at those who bring books to those in remote areas who would not normally have them. The film dashes between the plains of Mongolia, where children's book author Jambyn Dashdondog gathers children into his bright orange tent (a yurt), to Bangladesh where Mohammed Rezwan drives his "floating boat library" down the jungle rivers, to Kenya, where Abdyllahi Osman carts the books along by camel. We see the same European tale being read by a child in Kenya and a child in Mongolia: My Sister's Wedding. We enter the imaginative world of the children who read these books, by watching the excitement in their faces, in the flicker of their eyebrows.

The quote that starts the film: "With books, everything looks bright and the world is like a colorful dream."

The settings are fantastic: the camel crouching in the desert with the books on its back, while flute and drum music floats in the background. The bright white snow on the steppes. The lush palms of the banks of the river in Bangladesh. 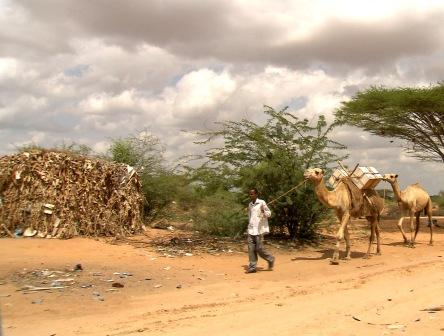 What is also cool is that the three "librarians" are all self-made entrepreneurs. The Mongolian children's book author personally translated 108 books on his own, so children could read foreign books. "Nomads always long for fresh pastures." As for Rezwan: he started the Bengali project with less than 500 dollars: only to be recently rewarded with a million dollar grant by the Bill and Melinda Gates Foundation. "In the next five years," Rezwan enthuses. "I hope to reach 180,000 families."