You may have already heard a few appalling facts about food waste but just in case you haven't, here are a few tidbits of information to catch you up on the issue.

-We throw away 165 billion dollars worth of food per year in America. That's more than the budgets for America's national parks, public libraries, federal prisons, veteran's health care, the FBI, and the FDA combined.

-To create just the amount of food that ends up in the landfills we waste enough water to meet the domestic water needs of every American citizen.

Even with these mind-blowing statistics you probably still need to see it to believe it. That is where I come in.

This weekend I arrived in New York City from my second bike ride across America living on food from grocery store dumpsters. On my first ride dumpster diving across America, about 70% of my diet came from dumpsters, totaling up to about 280 pounds of food over 4,700 miles of cycling.

This is what a typical dumpster score looked like: 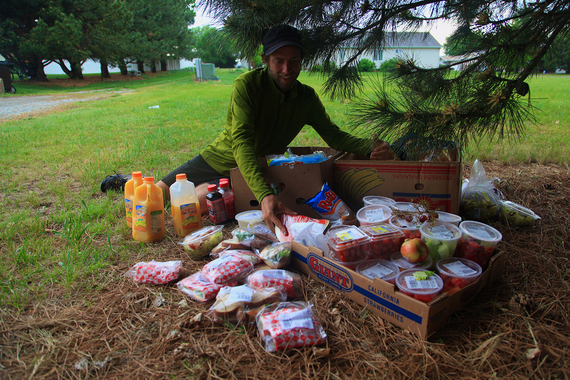 This time around, halfway across the country, I vowed to eat exclusively out of grocery store dumpsters until I reached New York City. For the 1,000 miles and seven weeks of riding from Madison, Wisconsin to New York City you could have spotted me in any of 300 or so dumpsters across America. I admit I slipped up on my vow a few times. Once when a brownie was set down in front of me in Baltimore, another time over some freshly popped popcorn, and a few times I picked a fresh tomato or leafy green out of a garden. Plus I used oil and some herbs for cooking when visiting friends in their homes. Other than that I ate like a dumpster king and gained five pounds even with all of the time spent on my bike.

Here's what a guy who eats straight from the dumpster looks like: 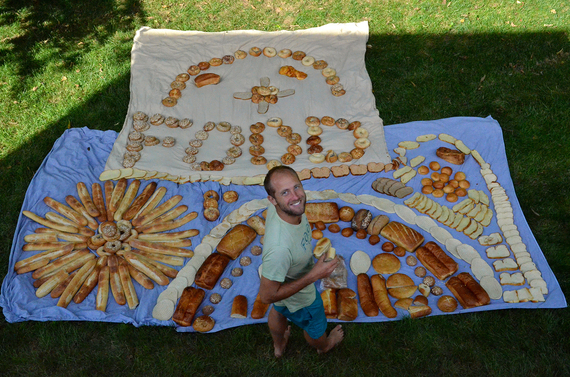 I'm not just dining from the dumpster to meet my needs though. I'm doing this to inspire America to stop throwing away food. My interactions with whomever I crossed paths with helped them to see the food waste fiasco firsthand but still I said I would help YOU see it to believe it.

That is where photos from my public demonstrations come into play. In seven cities along the tour I went out dumpster diving, usually just for one night, and set up my find in a public park the next day. Many people were shocked by what I showed them and even more were angry, not at me, but at the waste of our society when millions of Americans are hungry.

I had just a few days at most in each city to pull these fiascos together. Here is what my friend Dane and I managed to scrounge up in Madison, Wisconsin in two days: 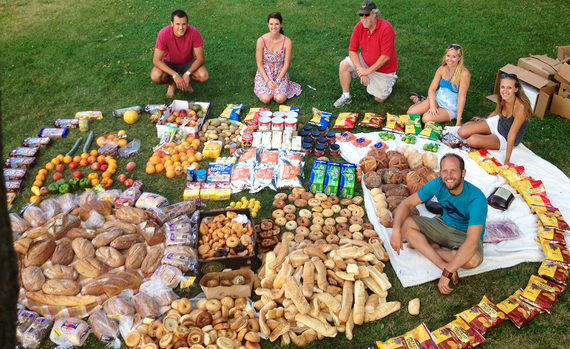 I found a volunteer via social media with a vehicle to help in each city since I couldn't carry all of the food on my bicycle. This was is what we gathered in Chicago, Illinois: 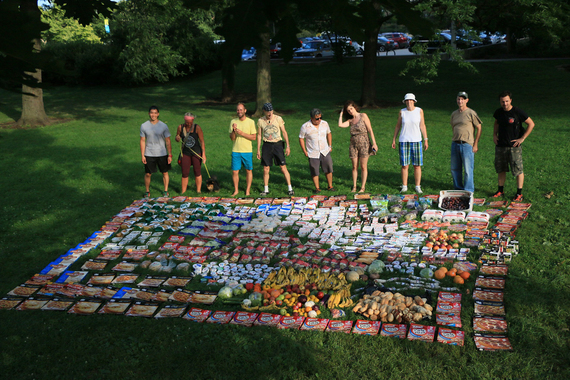 None of the volunteers even had dumpster diving experience and I was completely new to the dumpster scene in each city. In Detroit, Michigan we started diving the morning of the event and the car was filled with this in 2 hours: 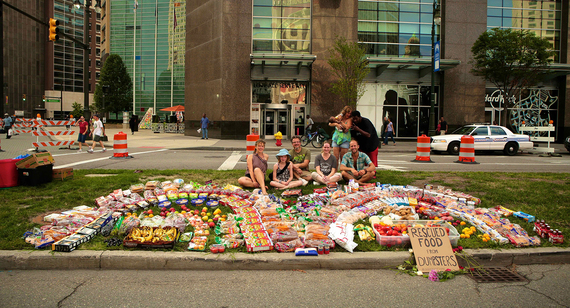 In Cleveland, Ohio we spent seven hours at the dumpsters the night before the event and brought this food to Cleveland Public Square. It was 90 degrees that day so much of the food we found in the dumpsters was spoiled. This is just the good stuff that we pulled out: 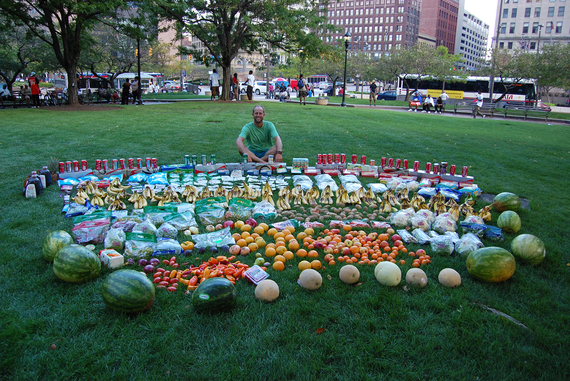 In Lancaster, Pennsylvania we had two vehicles and we hit about ten dumpsters between the two teams. This is what we took home in four hours. 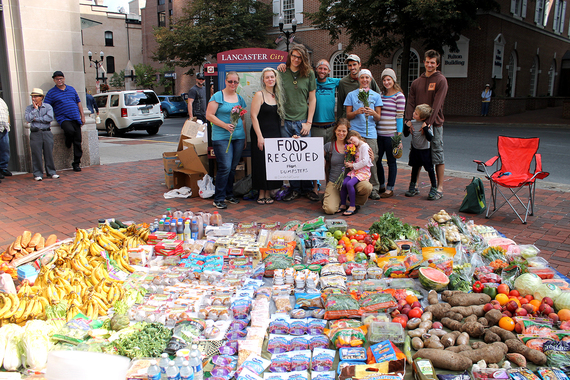 Two days later I rolled up in Philadelphia, Pennsylvania at 9:00 PM, started diving an hour later, and was sound asleep with this score by 1:00 AM. 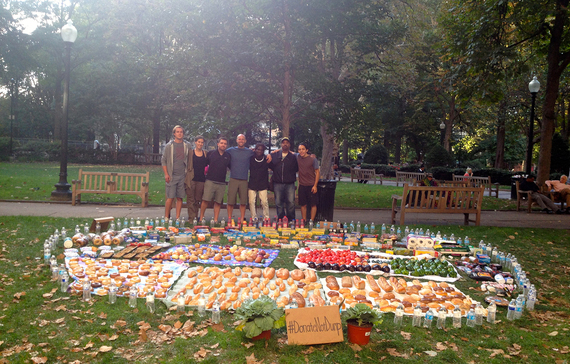 The food was still very high quality stuff but I never intended to even give it away. I just wanted to show people what we are wasting. But then people started to take the food and that made the mission all the better. Guys like David were so happy to eat and to share it with their friends: 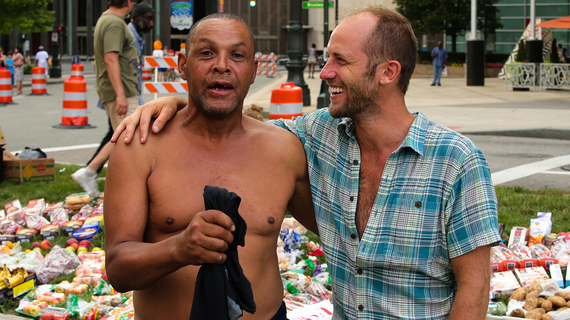 Between all of the demonstrations that I hosted we ended up giving away over $10,000 worth of food and fed well over 500 people. To me that is proof of how good the food is that we are throwing away.

I've learned that I can roll up in nearly any city across America and collect enough food to feed 100's of people in a matter of one night. The only thing that limited me was the size of the vehicle I had to transport it. My experience shows me that grocery store dumpsters are being filled to the brim with perfectly good food every day in nearly every city across America, all while children at school are too hungry to concentrate on their studies.

My intentions with these photos are to help you to get an idea of the scale of this issue. Even still these are just photos. Seeing it in person is a whole different story. So my mission continues. If you are in New York I invite you to join me in person this Tuesday, September 30th, in Union Square Park for the final fiasco of the tour. I'll have been out diving in the area for the weekend and you'll be able to see first hand what America is throwing away. The food will be set up for display by 5:00 PM and after a few hours of viewing it will be free for the taking.

I know not all of you are in New York though and I also want YOU to see it for yourself. So I encourage you to go to your grocery store and do something a little different from your normal routine. I want you to walk around to the back of the store, find their dumpster, and take a look inside. You don't have to take any of the food home with you. You don't have to get in the dumpster either. Just take a peak and see this problem for yourself. The dumpster may be locked or it may have just been emptied so check out a few places if needed. The first time you see a dumpster full of food your life could be changed forever. If you feel inclined to be a part of the solution I encourage you to photograph or video the wasted food you find and spread it on social media using #DonateNotDump. Tweet it at the store and let them know that we are not going to stand for their waste anymore.

With that action in mind you should be versed in this a little bit more before you hit the dumpsters. Our message to the grocery stores is that we want them to stop dumping their excess food and start donating it to non-profits so it can be distributed to people in need. Through my hands on experience and research I have found that it is a win-win situation for grocery stores to do this. They are protected from lawsuits by the Good Samaritan Food Act, they get tax write offs, they spend less on dumpster fees, and most importantly they are doing what is right for their community when they donate their excess food! The most common excuse for not donating is that they fear liability but they are protected and according to a University of Arkansas study not a single lawsuit has ever been made against a grocery store that has donated food to a food rescue program.

Thousands of food rescue programs, such as City Harvest, Feeding America, and The Food Recovery Network are already feeding people across America and thousands of stores are already donating to these non-profits and food banks. However it is a very small fraction of what could be done. We need more stores donating more often and we need them to compost what they can't donate rather than sending it off to the landfill.

You don't even have to peak into their dumpsters if you don't want to. Share this article with supermarkets or simply talk to the manager while you are at the store and let them know that it is important to you, their customers. Humans with hearts run these stores and we can get them to change for the better! It's up to us to hold them accountable to treat the environment and our hungry Americans with the respect they deserve.

I believe that we are at a tipping point for ending food waste and with citizen action we can solve this. The excitement inside me tells me that my generation will drastically reduce food waste in our time.

Start by telling your grocery store to #DonateNotDump!