Credit goes to Rob Burnett who wrote the screenplay and directed. His years as head writer and then executive producer of "The Late Show with David Letterman" along with his work as creator of "Ed" (which won a People's Choice Award) provided him with the experience and flair to give the story pace.

Can a pathetic self-loathing caregiver turn it around?
In the novel, Ben Benjamin, the caregiver, takes a long time (pretty much the entire novel) to get out of his deep, immobilizing funk. He's experienced the worst kind of personal tragedy (the worst), so we forgive him his deep sorrow.

Prior to becoming a certificate-carrying caregiver with absolutely no experience in that professional realm, Ben, by his own account, was an "unemployable stay-at-home schlub whose wife gave him an allowance." He's about to turn forty. His CV would note that he had worked as a parade-float painter and in a bakery as a scone-stacker. Oh, and he has a history (going back to college) as a writer of self-conscious poetry.

We would enjoy joining him on the road-trip he arranges for the 19-year-old boy (Trevor) who's withering in a wheelchair. The boy's future is foreclosed by a progressive and incurable impairment - advanced stages of Duchenne muscular dystrophy.

DMD has twisted Trevor's spine in knots; "tightened his joints so that his ribs all but rest on his hips." His shriveled legs "are bent up toward his stomach... his elbows are all but locked at his sides." He's "a pretzel with a perfectly healthy imagination."

But he doesn't take risks - he figures he can't afford to. He "willfully imprisons himself inside his routines." So confined, he "consumes" life via the Weather Channel, and carefully pre-planned and well-orchestrated trips to a mall. The life he allows himself is sampled cautiously, with a bitter teaspoon.

As Trevor contorts himself and fumbles to reach the mobile phone in his pack, and as he strains to clutch the wheelchair's joy-stick in his knotted gnarled hand, Ben is moved - out of his own incapacity. Trevor's life is "subtraction" - he's "aging in reverse" - increasing incapacity, retreating into infancy. What to do with the time that's left?

Trevor's mother has to work a full-time job, so there's need for a caregiver; thus an engagement that gives Ben a chance to enliven the life of the self-shut-in - and, in the process, make some use of his pathetic life.

Venturing an adventure
Desperate to find something to talk about, Ben begins mapping the region's roadside oddities and curios. A geography exercise replete with the world's largest this and the world's deepest that, they move from mapping to hypotheticals and speculations and what-ifs. Could Ben and Trevor manage a road-trip to take in those attractions, from western Washington, through Idaho and Montana, then down to Utah? returning through Wyoming, and actually arriving home, unscathed?

Thus a story that would lend itself to the big screen - a Netflix screen, anyway. Though budget, logistical considerations, and actor-availability dictated filming in Georgia rather than the Northwest.

The movie
The adapted mini-van (with its mechanized ramp) becomes a small-scale Noah's Ark - lifeboat, really - transporting and sheltering those along the way who could use some rescuing and companionship.

Craig Roberts delivers Trevor's sneers and deprecations, as well as his vulnerability. Though Trevor is physically incapacitated, the road trip brings out his capacity for insight and humanity. His facial expressions "speak." The timing of his retorts and wry stingers are treats. There's a quiet and wholly-believable emergence of pluck. 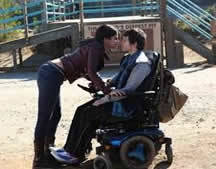 As Dot, the scoffing teen hitchhiker (who in the novel does what she can to mask her attractiveness), Selena Gomez impressed the director with her professionalism, her devotion to the story and the shooting schedule (a mere 23 days of filming).

Trevor and Dot have a rapport that's missing in the teen-on-teen "connections" ("hook-ups") that I've been privy to in movie trailers.

Capturing the road not traveled voluntarily
The movie's depictions of municipal edifices, motel interiors, and greasy-spoon eateries are just what the novel called for.

Edifices
In the novel, we ride by a squat green portable that serves as a sheriff's substation; there's a fire-house of cinderblock construction that one would expect to find in a down-and-out prisoner-of-war camp; there's a "blotchy and windowless" community hall "possessing all the architectural allure of a two-car garage" and there's the aluminum-sided city hall that "with a few more windows might make a nice retail outlet for ball bearings."

Accommodations
There are motor-court motels on the scrubby outskirts of unprepossessing residential encampments.

In the novel, the motel rooms are decorated in "early fleabag: swampy green carpet, jaundiced yellow drapes. Everywhere the residue of twenty-year-old-smoke. Dust particles the size of gnats swarm in the lamplight." In one room the alarm clock is bolted to the nightstand. In another, the lamps are secured likewise.

Even the most fearless digestive tract could be challenged by the Mexican-themed eatery that thinks nothing about serving Smurf blue tacos and a beef chimichanga the size of a yule log (which seems to be breathing, slumps in its gravy wallow, and seems about to groan under its own weight and displeasure).

There's a "dark and filmy" eatery "awash in a suffocating array of miscellany," including animal pelts and amateur taxidermy (a whistle pig and a rockchuck). "The place smells of corned beef and cat litter."

The descriptions of filling-station food might give the reader gas. Arriving late, the sight-seekers often have to resort to mini-mart fare: corn dogs and things on sticks "that look like they've been sitting under the heat lamp since the dawn of the Pleistocene Era."

Drama, too
Now there are four: The minivan rescues an extremely good-natured innocent (named Peaches) who is very pregnant, and unwed. In the book, she delivers by the side of Old Faithful, with Ben in need of calming. Most fortuitously, a medic handles the delivery most competently, especially given the crowded outdoor circumstances - and Ben's panic. In the film, at a contrived geologic site, Ben rises to the occasion - though it may be one of the very few childbirths in which there's no umbilical cord.

Novel to screenplay - more than downsizing
In a Q&A following a pre-release screening of the film, Rob Burnett spoke about the novel as a large house which required him (as much as he liked "the place") to scale it back - remove some of the "decorations." The "corridors" (short chapters) leading back again and again to Ben's tragedy (refrains of guilt and shame) are streamlined. Much of the psychological clutter has been removed. The repetitious angst and despair, along with characters and scenes that reinforce that miasma, are eliminated. Nevertheless, the screenplay is well-furnished from the novel.

Minimal lives are upgraded even as Ben maxes-out his credit card. The screenplay and the performances rate ready acceptance, and are worth our interest.