The Karma of Coldplay: A head full of dreams, and a community of shared rhythms 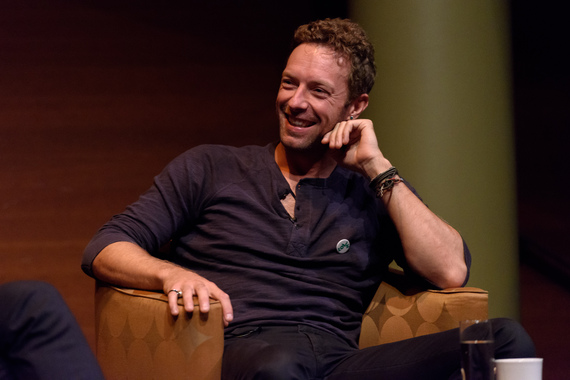 What have 96 four-year-olds from Germany got in common with the four 30-something members of Coldplay from the UK? Answer #1: music. Answer #2: co-operation. First hear what Chris Martin told Ashtanga yoga teacher Eddie Stern when he visited the Rubin Museum to talk about karma just before cooperating with Beyoncé, Pearl Jam, Ed Sheeran, and Sting to produce the fourth annual Global Citizen concert on the Great Lawn in Central Park, New York City.

"A group of like-minded people are all becoming something bigger than themselves," Chris Martin declared, with the implication that this bonding can create a momentum for change.
"What happens when something becomes greater than the sum of its parts?" asked Eddie Stern.
"For Global Citizen, it's to bring all of those people to the same place to try to work out some solution," replied Chris, adding, "It has to be listened to."

Music as society's Elmer's
A number of neuroscientists have identified this unique property of music to function as a societal binding agent. Psychologist Daniel Levitin, author of This Is Your Brain On Music, appeared on stage at the Rubin with songwriting legend Paul Simon in the annual Brainwave series in 2008. Levitin makes the case for music as a key component in our evolutionary development. The tribal unity that is forged through shared rhythms and cultural property lead, he claims, to social bonding, improved fitness, and a superior ability to survive. In other words, music forges karmic connections.

96 German children
To support this idea, a 2010 study conducted by Sebastian Kirschner and Michael Tomasello at the Max Planck Institute for Evolutionary Anthropology in Leipzig demonstrated that collective music-making fostered group cohesion in four-year-old children. Those children in the 96-strong study group who took part in simple group singing and rhythmic ritual showed an increased propensity towards collaborative behavior in subsequent problem solving. Music making and dancing are often a prescriptive part of group rites. In traditional cultures these might take the form of weddings and preparations for battle - with music fortunately helping to differentiate between the two. The Monkees aside, humans are still believed to be the only primates given to music making. When music making takes the form of joint singing and dancing, it works on our awareness of others. Audiovisual coordination is stimulated. An understanding of the collective intention is developed. A shared goal of vocalizing and moving together in time is realized. This seems to satisfy the basic human desire to share emotions, experiences and activities with others. Neuroscientist Jamshad Bharucha, who was last at the Rubin with cellist Maya Beiser, would take it further and say that music's main function is to forge a group consciousness, rather than just be a vehicle for emotional expression.

In the flow
Time and again when musicians are called upon to talk about music making and performing, they will refer to being in the 'flow'. And for Chris Martin, tapping into that consciousness when trooping into the recording studio is no exception. "You have to understand that you don't create magic," he said, with his customary modesty. "It's about channeling, receiving, and being aware of it." Going into the studio with an agenda to write a hit song is usually counterproductive. "When we let things flow as a band... that is when we feel the happiest. People who write songs know they are dealing with a higher thing that has nothing to do with them." In this conversation about karma and awareness of the connectivity alive in the world, he revealed that his new album A Head Full of Dreams would be inspired partly due to his reading of Coleman Barks' translation of Rumi's famous poem, which he promptly recited by heart:
This being human is a guest house.
Every morning a new arrival.
A joy, a depression, a meanness,
some momentary awareness comes
As an unexpected visitor.
Welcome and entertain them all!
The poem "had a huge impact on me," Martin acknowledged. "I never knew growing up that feeling this way or that way was ok."
Poetry. Music. Impact.
Karma has a beat. It just has to be listened to.