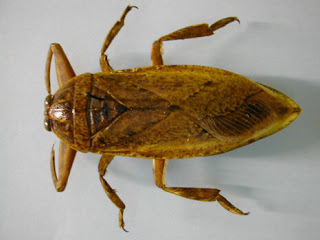 Let's say you see a water bug. You grab a piece of toilet paper and prepare to crush it. Sensing the cloud over its existence, the water bug scampers away. You give chase and the water bug becomes fairly elusive like a fleet-footed boxer whose able to duck and slip a powerful opponent's punches. Water bugs aren't supposed to think and yet they're plainly capable of sensing the danger to their existence. Science Times recently ran a piece on quotidian sadism ( "'Everyday Sadists' Among Us," NYT, 9/16/13). The subject of bugs even comes up in one of the experiments the article refers to which tested sadism in run of the mill individuals who aren't proto Hannibal Lecter's. It's like the notion that there is a little bit of larceny in everyone. Of course Stanley Milgram's famous experiment which tested obedience to authority by use of shock was also a measure of sadism. Some people turned the shock up even though the actors seemed to be writhing in pain and some couldn't even though they were told not to pay attention to what they were seeing. But back to that water bug. The fact that the animal gives you a run for the money is a clue to the fact that it experiences something akin to emotion--at least the emotion of fear. However, paradoxically it's just the presence of this human trait that whets one's appetite. After being tormented by a little fly, you feel no moral compunctions about using a swatter on it. It's Kafka's The Metamorphosis in reverse. The fly or water bug has become human.