For me and my team at InVenture, it's a strange time to be entering the microfinance industry.

Recently, the only news about this industry has been bad news: last Spring, for example, a front page New York Times story faulted lenders for profiting off the backs of borrowers, and more recently, in the Wall Street Journal and elsewhere, we learned that as many as 30 micro-borrowers in India have committed suicide over looming, debilitating debt.

On the academic side of things, the picture isn't much brighter. Researchers around the world have only recently started measuring the actual long-term social impact of micro-lending, a financial tool that has been employed to fight poverty for more than 30 years. And what they've found hasn't been all that promising. Much research, for example, is starting to show that microloans often do more harm than good by saddling borrowers with high interest rates and strict repayment terms.

And not only that, but there is little evidence that access to microloans has helped individuals make noticeable advancements in their livelihoods. One evaluation of microfinance in rural Morocco by Esther Dufflo, professor of poverty alleviation and development economics at MIT, found that there was no impact on overall welfare, education, or women's empowerment, which are all typical indicators of long-term development.

At the 2010 Microfinance Impact and Innovation Conference, held a couple weeks ago in New York City, I spent a lot of time going to panels that lamented the gap between practitioners and researchers. We keep trying the same tools, panelists claimed, even while research is starting to show that these tools aren't generating the predicted effect.

When Muhammad Yunus won the Nobel Peace Prize for his work at Grameen Bank, we all believed we had found a miracle tool that could help entrepreneurial individuals lift themselves out of poverty. And while microfinance has indeed changed the way we think about economic development and poverty -- and created new possibilities on both of these fronts -- we know now that we still have a lot of researching and experimenting to do if we want to see microfinance reach its full potential.

I believe, for one, that these studies on microfinance's impact, while sobering, are actually opening the field to new ideas and providing the impetus to develop more effective and harder working models. InVenture, the organization I founded, is one such model. We're implementing a revenue-sharing investment product with flexible, long-term repayment schedules. Our model works more like a traditional investment cycle, aligning the investors' interests with the businesses', so that no one makes money unless the business makes money. And, our businesses have anywhere from six months to two years to repay the principal investment, giving them the freedom and flexibility to take risks that might actually grow their business rather than burdening them with debt.

We presented our idea and the findings from our pilot funds at the Microfinance Impact and Innovation conference, and we received positive feedback from both researchers and practitioners alike. We even have some potential new partners -- others in the field who, like us, want to try something new.

And already we've seen some positive traction for our model on the ground. Take Griselda, for example, a mother of four and the founder of a health clinic that serves rural populations in Milpa Alta, outside Mexico City. Griselda was turning away patients who needed ultrasounds because she didn't have an ultrasound machine. With help from our online investor community, we raised the financial capital to help her purchase this machine and we believe that this investment and partnership will help her both increase revenues and provide a crucial service to her clients. This is an example of how microfinance can provide both an economic and social good -- which is what we all hoped it would do in the first place. 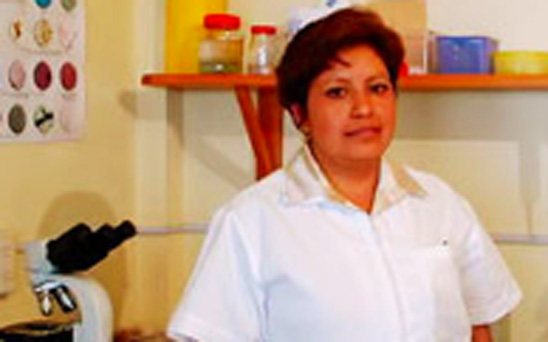 (Pictured Above: Griselda Flores, 42, an InVenture client who runs a health clinic in Milpa Alta, Mexico)

Last year, we also launched pilot funds with businesses in India, Ghana, and Mali. It will take some time to see and to measure the real effects and impact of our revenue-sharing idea. The important thing for now, I think, is that we've developed a new model that's focused on growth, that mitigates risk, and that changes based on the needs of each particular business owner and region.

It's probably not the most widely scalable approach, in terms of a turn-key type of product or service, but I believe it's the one with the most potential to make a measurable difference. And I hope it inspires others in the field to reinvigorate microfinance - and ultimately increase its social impact - by trying new models that put business owners first.