This past year, we profiled extraordinary couples who triumphed and overcame all odds to get married, as well as those who opened their hearts and helped those in need. Their kindness, resilience and unwavering courage serves as a reminder of what's truly important on the wedding day.

10. Couple honors late son in their wedding photos in the most amazing way.
This couple's eight-year-old son, Lake, lost his battle with leukemia five months before their wedding day. The bride, Anna Bozman, wanted a way to represent that he was still with them every step of the way, so after the wedding, her photographer, Brandy Angel, incorporated a faded picture of Lake into a photo with the rest of the family. "Although I felt [Lake]'s presence that day and I was actually happy, it was almost unbearable to take family pictures without him," Bozman wrote in a Facebook post. "I could feel my emotions taking over after the ceremony when it was time to take pictures... I needed this picture more than [Angel] or anyone could ever know. THIS is my family. And we will be together again." 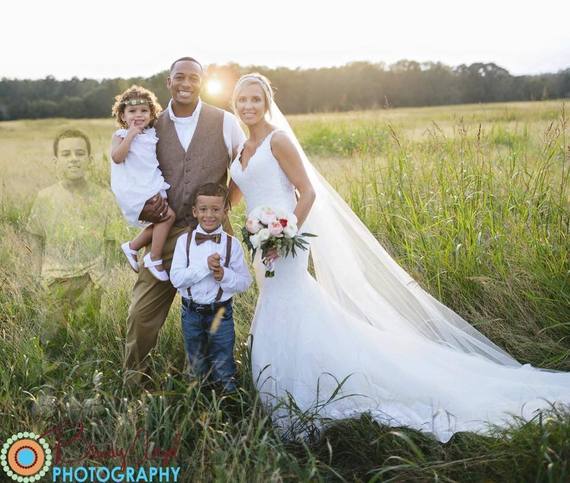 9. This couple recreated their wedding photos for their 40th anniversary.
How do you celebrate 40 years of wedded bliss? This couple decided to take their wedding-day attire out of storage and recreate some of their favorite photos from their wedding day! "They met in a bar called The Lower Level and his first words to here were, 'You wanna boogie?'" their son, Jay Johnson, shared on Reddit. "If that isn't the start of a great love story, I don't know what is." 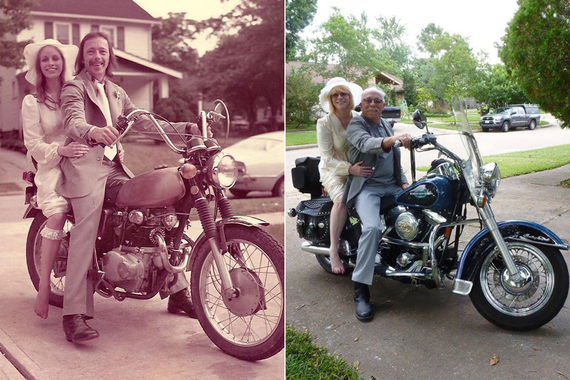 8. Flower girl and ring bearer marry 20 years after first walking down the aisle together.
Briggs Fussy and Brittney Husbyn met when they were just three years old, serving as the ring bearer and flower girl, respectively, at Fussy's godmother's wedding in Minnesota. Decades later, the pair made a second trip down the aisle together — this time as husband and wife! The newlyweds, both 22 years old, revealed to ABC News that their paths didn't cross again until their freshman year of high school. "We were in class, and she had a picture with her from the wedding," Fussy said. "I started to laugh because it was the same one we had hanging in the hallway at home, but I never knew who she was. That wedding was the only time I ever saw her." Their relationship took a romantic turn in their junior year of high school. Fussy went on to attend the University of Wisconsin, LaCrosse while Husbyn studied at Minnesota State University, Mankato. CNN reports that a few years into the long-distance relationship, Fussy switched to Minnesota State to be with his future wife. "I knew I was going to marry her," he says. 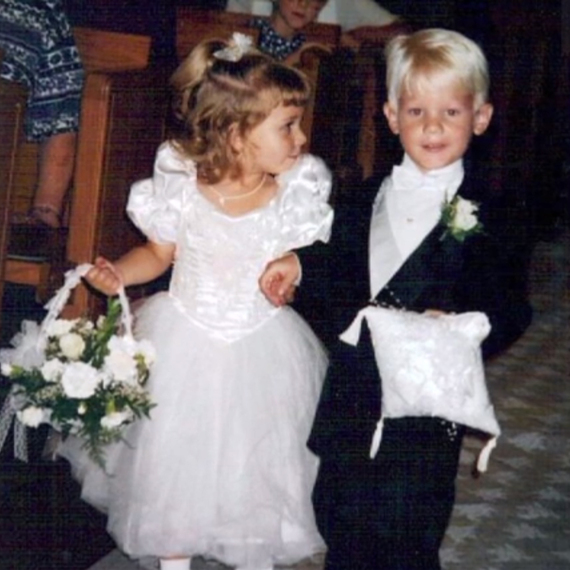 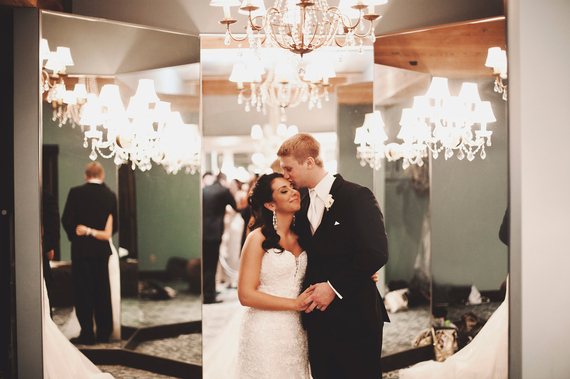 7. These wedding-day dances stole our hearts this year.
It's not uncommon to shed a tear or two during the bride's dance with her husband or father. However, at leukemia survivor Greta Perske's wedding on October 10th, guests were overcome with emotion when she dedicated a song to Danny Daniels, the bone marrow donor who saved her life. The pair danced to "Angels Among Us" by Alabama for their special moment; a perfect song because not only did he save her life but also the lives of countless others as a former member of the Air Force National Guard. "To me, it was nothing short of a miracle," Joe Perske, the father of the bride, tells The St. Cloud Times. "It was a day we didn't know if it would happen." 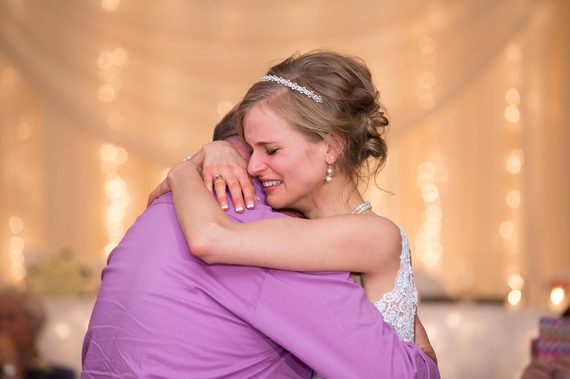 Another dance we'll never forget is the father-daughter tribute dance of a fallen police officer. Four officers came together to support Kirsten, the daughter of Piece County Deputy Sheriff Kent Mundell, who was killed in the line of duty in 2009 while responding to a domestic dispute. Kirsten started off the dance with Seattle Police Detective Don Jones before being surprised by her father's close friends and fellow members of the law enforcement community. "All of a sudden, someone taps me on the shoulder and says, 'Can I cut in?' and I was shocked. I didn't know how to react, how to respond," she told KOMO News. "He said, 'There's a whole line of us,' and right as he said that is when the next officer cut in, and I just broke down." 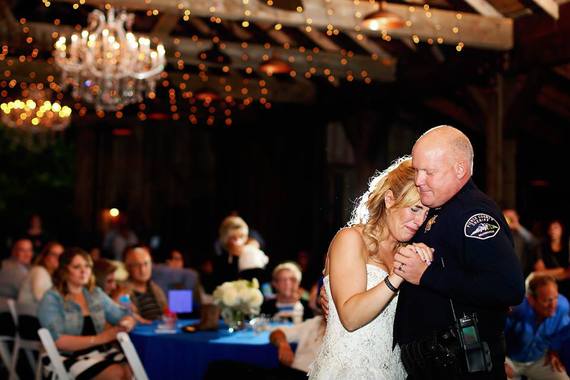 6. Stranger anonymously purchases bride's wedding gown.
Elizabeth Jensen went shopping for her wedding gown on February 20th but once she found "The One," something remarkable happened; she discovered that a complete stranger had already bought it for her! Carrie Ling, the co-owner of Elizabeth Cooper Design (the store where Jensen got her gown), reveals that the do-gooder shared her intention to pay for a fellow patron's gown but wished to remain anonymous. Deseret News reports that had it not been for this mystery woman's generosity, Jensen might not have been able to afford the $480 dress. The seventh of eight children, money was tight in her family, and she was worried about paying for her upcoming college tuition bill (she attends Brigham Young University). She and her fiancé Jimmy Gillespie plan to pay it forward at their May 1st wedding by having a station where guests can pledge to be kind and do a service for someone else. "You don't necessarily have to go buy a person's wedding dress to help someone. It is in the little things that hearts will be touched and softened. This experience has changed my lifelong perspective," Jensen tells The Daily Mail. 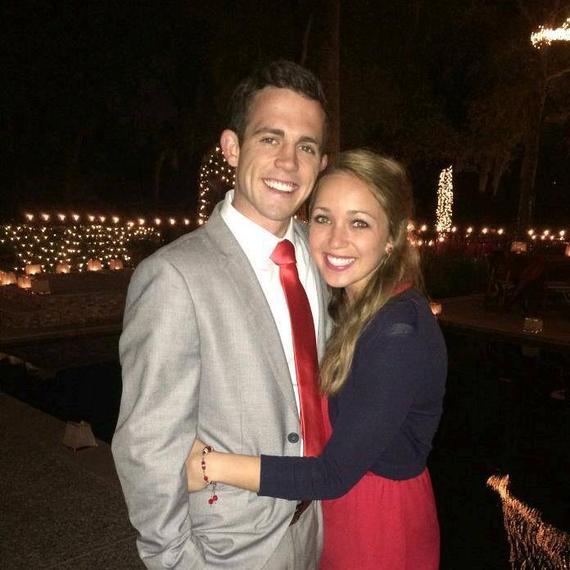 5. Mom saved letter for 20 years to give to daughter on her wedding day.
When Brooke Zugg was just 18 months old, her adoptive mother Sherry wrote her a sentimental letter that she saved until her wedding day. More than 20 years later, on March 7, 2015, her daughter was finally able to read the words that she had written when she was a newborn. The mother of the bride even had the letter printed onto a piece of her own wedding dress as a special memento. Watch the video below:

4. The sweet story behind Marine's viral wedding photo.
A moving photo of a Marine and his wife praying at their wedding went viral over Memorial Day Weekend, serving as a reminder of what the holiday is truly about: honoring the service men and women who sacrifice their lives for our freedom. Corporal Caleb Earwood, 21, and his bride Maggie, 22, said "I do" on May 23rd in Asheville, North Carolina. Just moments before their ceremony, they took a few minutes to be alone in private, holding each other's hands as Caleb recited a special prayer for their new life together. Not wanting to break tradition, they stood in a doorway of their church, facing opposite directions so they wouldn't see one another. "As soon as their hands touched he started getting emotional," their photographer, Dwayne Schmidt, tells ABC News. "I tried not to cry and focus on what I was doing." To the couple's shock and amazement, they received an outpouring of support from veterans who thanked them for sharing their story. 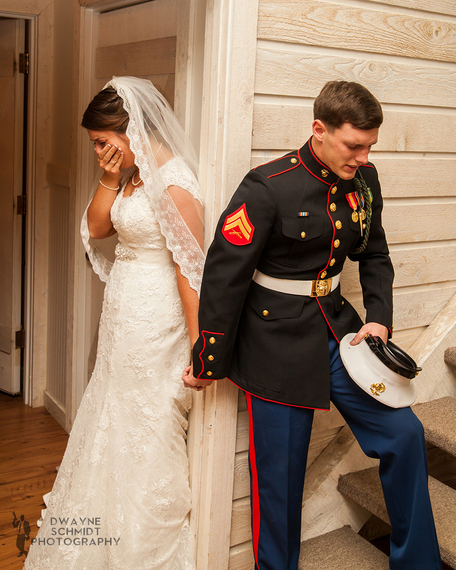 3. This father's beautiful gesture toward his daughter's stepfather made us cry.
How do you thank a stepparent who's helped raise your child all these years? Father of the bride Todd Bachman decided to honor stepfather Todd Cendrosky by pausing the procession and asking if he would help escort their daughter, Brittany, down the aisle. "[Brittany's biological father] said, 'You worked as hard as I have. You'll help us walk our daughter down the aisle,'" Cendrosky told USA Today. "I got weak in the knees and lost it. Nothing better in my life, the most impactful moment in my life." Bachman's touching surprise made national headlines, and many were amazed to discover that the two men haven't always gotten along, which is what made the symbolic gesture even more special, because they put their child's needs first. 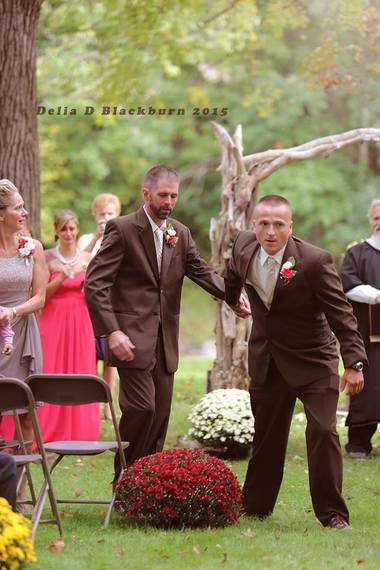 2. The Internet hailed this as "the best wedding toast of all time."
Sing it, sister! Kelsey and Maddie Hallerman performed a speech at their sister Caitlin's wedding that not only earned a standing ovation from guests but was so epically awesome that it went viral. The sassy co-maids of honor sang the story of how their sister and John (the groom) came to be husband and wife. We learn about the bride's childhood and how she didn't want boys around (to the tune of "I Want You Back" by Jackson 5). That all changed when she met John at USC, and they went on a movie date (to the tune of "Everybody" by Backstreet Boys). Watch the video below:

1. This woman's canceled wedding turned into a celebration of life.
Amber Jones experienced every bride's worst nightmare when her fiancé called off their wedding just a few days before it was supposed to take place. But instead of allowing her sorrow to consume her, she and her photographer documented the grieving that she (and her family) were going through to help the healing process. "I realized something truly beautiful happened out of all the ugliness...In the armor of my family's strength and support, I could face the battle of heartbreak without fear or humiliation. I cried. I laughed. I sang. I danced. And somehow, in an indescribable way, I won. Did I get married? No. Do I still have a lot grieving and healing yet to do? Yes. But all of that will be okay in time because, in the end, I got so much more than a wedding," Amber says. 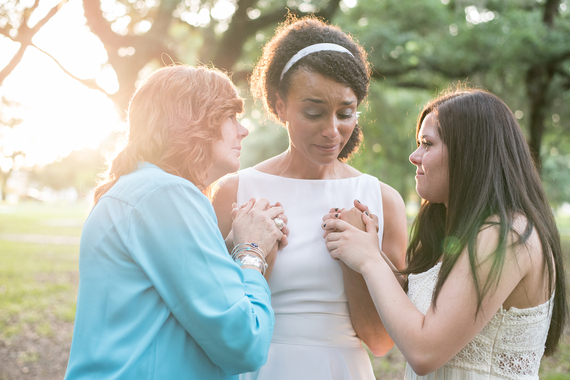