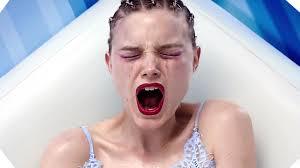 The Danish-born director, Nicolas Winding Refn, has helmed a few popular movies such as Drive (2011), Bronson (2008), and the Pusher trilogy. This success has been only slightly marred by a handful of far-less-favored works including Fear X (2003) and Only God Forgives (2013) starring Ryan Gosling.

Ironically, that latter disaster supplied grist for one of the best scenes in the documentary, My Life Directed by Nicolas Winding Refn, which was helmed by Refn's wife, the talented but put-upon Liz Corfixen. Near the end of her engaging feature on her self-absorbed spouse, Refn, lying on his bed after the Cannes opening of Only God Forgives, mutters, "Why do critics have to be so cruel?" Then he reads aloud off his cell phone this Hollywood Elsewhere critique by Jeffrey Wells:

"Movies really don't get much worse . . . . It's a shit macho fantasy -- hyperviolent, ethically repulsive, sad, nonsensical, deathly dull, snail-paced, idiotic, possibly woman-hating, visually suffocating, pretentious. . . . [T]his is a defecation by an over-praised, over-indulged director who thinks anything he craps out is worthy of your time. I felt violated, shat upon, sedated, narcotized, appalled and bored stiff." 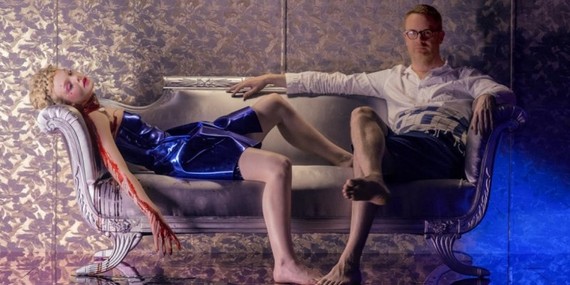 Nicolas Winding Refn confronts the 16-year-old girl living within him.

What I found so fascinating here, besides Refn's reaction to such verbiage ("That's how you know when you made great cinema. When half love and half hate it."), was that Mr. Wells will be able to reuse his review word for word for The Neon Demon.

This tale focuses upon a sixteen-year-old virgin, Jesse (Elle Fanning), who arrives in Los Angeles to begin a modeling career. Her first job is to lie on a couch with her neck supposedly slit and the fake blood streaming everywhere. The photographer is the young, kind-hearted Dean (Karl Glusman, who exposed his erection throughout Gaspar Noé's equally dull Love (2015)). The chap instantly falls in love with her.

Please don't ask why a nice guy would have a young woman pose with her body mutilated, other than it is a striking visual to open a film with. Anyway, Jesse has no time for love. Admitting herself talentless except for being pretty, she has only one item on her bucket list: to be a top model. Seemingly, she will succeed because when this young woman enters a room, everyone stares. Men. Women. Goats. Chimpanzees. 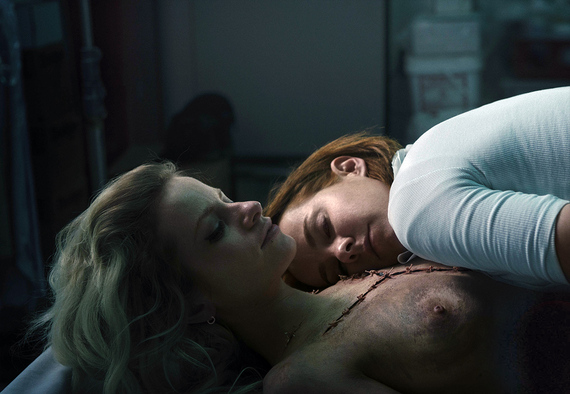 If Jena Malone's lesbian makeup artist can't get any affection from a living gal, she's not above spooning with the dead.

The very next day she's hired by a modeling agency. Twenty-four hours later she's posing for a top brooding photographer (Desmond Harrington), who after spotting her, has everyone leave the studio, orders Jesse to strip, then rubs metallic paint all over her body. Hopefully, it's not lead-based.

Mr. Refn has noted his goal was to make a satire about the modeling industry and America's facile addiction to externals. He also wanted to explore the 16-year-old girl that resides within himself. As if that weren't enough inspiration, he's spouted, "One morning I woke and realized I was both surrounded and dominated by women. Strangely, a sudden urge was planted in me to make a horror film about vicious beauty."

Now if Mr. Refn had an iota of wit (visual or otherwise) or if he respected women (his wife says he just wants her around as a housewife) or if his half-baked ideas spent ten more minutes in the oven, this offering could have been a gas. Paul Morrisey, John Waters, or even Greg Araki might have shaped this hodgepodge into a tongue-in-cheek funfest. But if Refn is aiming for intentional laughs, he fails. He seems to have been treading more into David Lynch territory but was swallowed up by the quicksand of his own dullardry. More Blue Polyester than Blue Velvet. 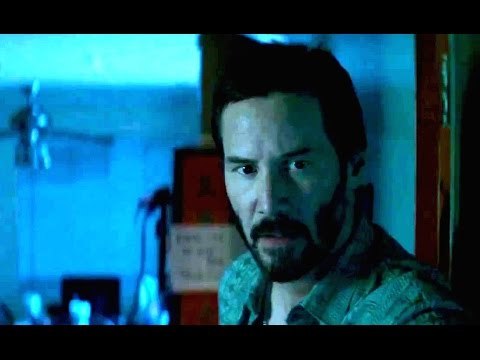 If motel manager Hank (Keanu Reeves) can't break into the room of a 16-year-old, an unlocked room of a 13-year-old will do.

That Refn had no idea what he was creating with Demon was not a new occurrence for this vanquished auteur. He has said of a previous effort, "I've spent three years on this movie, and I don't really know what it's about." Then after the filming and the editing of Only God Forgives was completed, he observed to his wife," I wasted six months of our lives." Happily, for us, with his latest, our wasted time clocks in at one hour and 57 minutes. It just feels like six months.

(The Neon Demon, which had its world premiere at the 2016 Cannes Film Festival to several boos, opens in theaters on June 24th.)