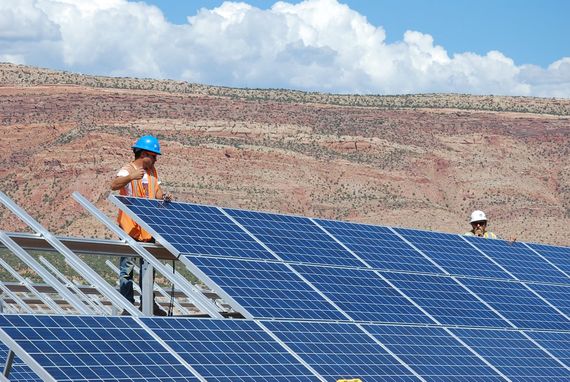 Rooftop solar is growing quickly. In the U.S., 1.2GW of residential solar was installed in 2014 and installs in Q1 of 2015 increased 76 percent over the same quarter in the prior year. In fact, so far this year, residential solar has added more capacity than the natural gas industry has.

But, the growth potential in residential solar has a natural cap: according to the US Department of Energy, about 50 percent of all rooftops can't use solar panels. Some are too shady, others are pitched at too acute an angle or house equipment that hampers installation. Many families don't own their home or live in multi-unit buildings and don't have the right to install panels on the rooftop. Still others can't afford it or are unable to secure financing. Taken together, some industry experts estimate that fewer than 20 percent of all households can add solar to their roofs.

This is a significant obstacle to the continued development of the residential solar market.

One increasingly attractive way to grow the market is the community solar garden, an offsite facility that provides power to multiple customers. Solar gardens can effectively make residential solar available to everyone by allowing customers without rooftop space to become renewable customers.

Community solar gardens provide important efficiencies by reducing the need for site-specific mapping and installation and by spreading the soft costs associated with permitting and interconnects. Garden power can be sold in variable units, making it affordable. And, by untethering generation from a customer's home, the benefits of renewable power move with the customer.

Community solar is still only a small part of the solar power mix. Last year, 21 MW of community solar were installed, and by the end of this year, industry experts estimate that 180 MW will be built. In addition, these are generally small projects, the vast majority under 75 MW. At that level, they aren't very profitable and it is often cost prohibitive to monetize tax credits that might be available for the project.

But, developing community solar projects at scale is still not as easy as it should be.

First, investors are still unfamiliar with, and cautious about, the asset class. There is not yet much data on customer acquisition costs or much standardization around customer contracts or billing infrastructure.

Second, community solar gardens still largely rely on a patchwork of supportive state policies. In Massachusetts, participants get net metering credits for off-site community arrays. Minnesota runs an uncapped program through its local utility. But, most states have nothing.

Despite these obstacles, the market potential is enormous. GTM Research estimates that the market for community solar will grow 500% this year and projects compound annual growth of 59 percent over the next five years.

Not surprisingly, start-up companies have taken the lead. Clean Energy Collective and SunShare, the two "biggest" players in the space, together account for almost a third of all operating community solar capacity in the US today.

To scale -- to reach the 80 percent of households where rooftop solar is not an option -- we need to expand and simplify the rules around building community solar and selling to customers. States should drop the caps on capacity and increase the size of allowable projects. The SEC needs to resolve the securities sales issue. Most important, developers need to appreciate the unique role the utilities play with consumers and the utilities need to develop business cultures which see their customers as their partners and not their adversaries, and don't see new sources of power production as a threat. The faster we help this happen, the faster residential solar will grow.