Let me start with some facts. The Camel Battle is a name given to an armed attack that took place on February 2, 2011 in downtown Cairo, during the first 18 days of the Egyptian revolution. It was carried out by groups of armed Egyptian civilians, against unarmed Egyptian civilians who had staged a sit-in in Tahrir Square.

The attack was carried out in medieval fashion; camels, horses and knives were deployed. Nearly a dozen people were killed and more than a thousand were injured. The Fact Finding Mission concluded that figures from the ruling regime were behind the attack. They had been trying to force protesters to leave Tahrir Square. The Fact Finding Mission pointed to parliamentarian Abdel Nasser Al-Gabri's involvement in plotting the attack. However, on October 10, 2012, an Egyptian court acquitted all the Camel Battle defendants.

Famous Chilean writer Isabel Allende once said: "Write what should not be forgotten."

Writing is one of the weapons I rely on to confront the ongoing and expected betrayals to memory.

There is an incident in particular that I don't want to forget. I don't want its memory to be betrayed. I want it to stay alive, I want the emotions I felt that night-- and that I experience anew as I type these words-- to resist disappearing as the years pass by.

The night the Camel Battle started, I was spending the night in my office, a two-minute walk from Tahrir Square.

A few days before the revolution, I had rented office space in the famous Al-Rowas building that overlooks Abdel Moniem Riad Square, just on the border of Tahrir Square.

I was overcome with fear. I watched a crime being cooked up. I started pacing from the window to the computer screen in a panic.

A colleague, who works as a journalist in the United States, had bought the apartment to use as headquarters for a law firm. At the time, I was looking for an office where I could start my own project-- a publishing house that I set up in Cairo two years later. I rented this office space from my colleague for a third of the asking price, because he had postponed his project. 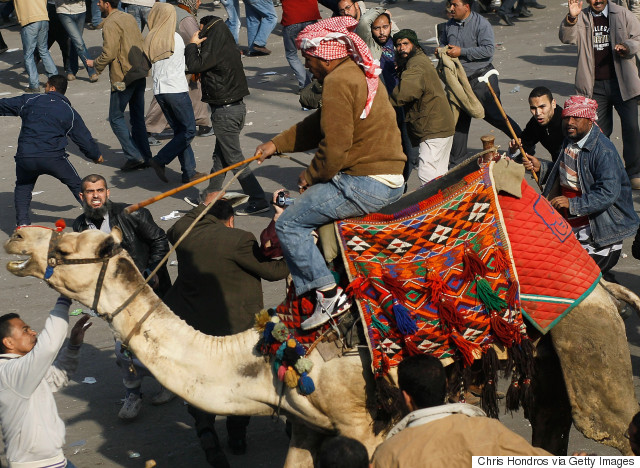 A supporter of embattled Egyptian president Hosni Mubarak rides a camel during a clash between pro- and anti-Mubarak protesters February 2, 2011 in Tahrir Square in Cairo, Egypt. (Chris Hondros/Getty Images)

Since January 25 and the events that unfolded over the following days, it became difficult to go home every night because of the curfew, so I moved in to this office.

On the night of the Camel Battle, I left Tahrir Square close to 7 p.m. I had planned to get some rest in the office and save my energy for the following day.

But the attack had started a day earlier, and people were worried there would be another one. My anxiety peaked when I saw tweets reporting a second attack.

I looked out the window at around 11 p.m., and I witnessed everything. There were organized groups, holding rocks and facing the square. So, it wasn't a rumor? An attack was being plotted right outside my window. Innocent people were about to get hurt. I asked myself: What am I supposed to do?

I had just left my friends at the Square a few hours earlier. One of them was my Mona Yassin, my colleague from Al Masry Al Youm newspaper. There was someone else with us, but I can no longer remember his name. Women and children were there too.

I was overcome with fear. I watched a crime being cooked up. I started pacing from the window to the computer screen in a panic.

I sent a message to a colleague who was at the time working in Washington D.C. Perhaps he could inform the media and people with power or do whatever with the information I had. But he was just as helpless as I was. He posted the tip on his page, and stopped messaging me.

I wanted to stretch my arms into the clouds and pull the moon closer; perhaps its light would expose the perpetrators, stopping them from committing the crime they were plotting.

I sent a message to another American colleague who was at the time working for Human Rights Watch. He replied, saying that he would try to pass it on to someone who could help.

I couldn't calm down. A lot of emotion rushed through me, and my heart started beating faster. I was angry at my heart and at my lack of power. I felt intense sadness and panic. My heart was breaking for the innocent people who were standing in a public space in their own country, at risk of murder.

The office was on the tenth floor. I decided to try to go out on the street, perhaps I'd find someone to help-- someone to help me stop the murderous thugs and the crime they were about to commit.

I went to building's lobby, and saw something I will never forget. It was like something out of a movie.

Soldiers from the Armed Forces, who had patrolled the borders of the square, were now in the lobby. They were spending the night here. At the time, I didn't know what to do. I asked myself: Should I tell them what I had seen? Some of them were standing outside the building, and could probably already see what was happening. I could see through my window, before I came down to the lobby, that they were letting people pass through the street.

Should I scream at them? Perhaps I could remind that that they took an oath to protect people's lives.

Would they harm me? If I asked them to let me go to the Square, would they accuse me of breaking curfew? Would I get arrested?

Feeling angry, scared, and defeated, I returned to the tenth floor without saying a word. I looked up at the sky. I wanted to stretch my arms into the clouds and pull the moon closer; perhaps its light would expose the perpetrators, stopping them from committing the crime they were plotting.

It was one of the deadliest nights; 11 people were martyred, and 2000 were injured.

The next morning, I couldn't go to the Square, which was surrounded by gangs of mercenaries recruited to empty out the square.

Later on, in one of the videos documenting the battle, I spotted a "colleague" from the institution I worked for at the time, working to arrange the entrance of the camels into the square.

Yes, retribution is now far away. But we have one last weapon: our memory.

A Fact Finding Mission would set out to find the criminal and dictate his punishment. Events unfolded, and now we're here. Not a single person has been punished for their actions, and they've only continued to commit crimes.

Crimes were committed by those who planned the attack, those who carried it out, and those who stood by and watched it happen-- all the while claiming that they were "protecting" the square.

The Egyptian citizens who staged the sit-in, starting January 28, were theoretically in the protection of the Egyptian Armed Forces.

Yes, retribution is now far away.

But we have one last weapon: our memory.

To fight forgetting, write what must not be forgotten!

This post first appeared on HuffPost Arabi. It has been translated into English and edited for clarity.