This is the second installment in a four-part series. Read the first here. 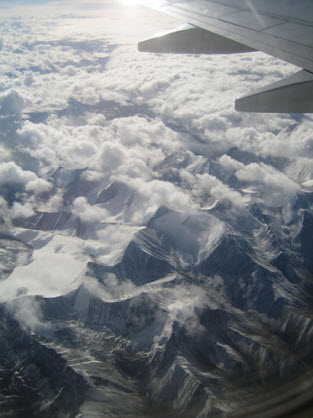 Such it is I find myself in Pakistan with nine companions, ready to retrace Lowell Thomas's expedition and do what he had not done: connect the line between Skardu and the Gilgit confluence by rafting the Indus.

It is the first week of October, and besides my friends we are joined by Captain Sohail Iqbal of the Pakistan army, on assignment as chaperon in this politically delicate region. The Indians hold that their border extends north to the Hindu Kush range; the Pakistanis feel the northwest frontier is theirs.
We take off from Rawalpindi, flying over Abbottabad towards Skardu. Looking up I see the underbelly of great grey frigate clouds, and higher still, a sky nearly black, pulling into nothingness. Moving out over the plateau, the land spreads in shelves, in ripples, in straggling eaves. The road looks like an infected scratch across the weathered skin of the plateau, curvilinear in some places, sharply angled in others.

Upon landing we are met by a landscape wild beyond the ken. A great oval basin, 7500 feet above sea level, some 20 miles long and eight miles wide, the Indus Valley here is enclosed by mountain ridges and peaks that soar up to 17,000 feet. The air is thin and crisp, and the details of shapes and colors, even at long distances, show dazzlingly clear. The valley is carpeted in fine, pale sand, gray as tarnished silver, patched occasionally with ochre, lemon and purple. In the middle distance, across the broad valley, the Indus snakes lazily between wind-ribbed dunes. Over millions of years the river has progressively cut its way into the rock, and the cliffs that now wall the valley are ledged and terraced at different heights by the old beds of the river. Farther back, the dry and bony mountains rise to their saw-toothed crests, intricately folded and overlapping. At the two ends of the basin, where they converge, it seems impossible that even a great and ancient river could force a passage through.

It is a landscape that could have been created only by earth forces at their most influential, and the entire welt of mountains that defines the north of Pakistan -- the Karakorams -- is indeed the product of a phenomenal series of events. It dates back to Gondwanaland, the semi-mythical "first continent," whose outlines were long discernible only to the imaginative who perceived in Africa's west coast and South America's east a near fit. Imagination gave rise to investigation, and investigation showed odd parallels between the rock, the history of the land, even the life forms on these opposite shores.

With the recent science of plate tectonics, this impossible supposition has been confirmed: most of the land masses on earth were once joined in a solid hunk of matter, floating on a primordial soup. Over the eons Gondwanaland has been split and bits and pieces borne away along the convection currents of the molten mantle, separating into today's continents. The Karakorams were created -- are still being created -- by the collision of the Central Asian plate with the Indian plate, which was once tucked against the east coast of Africa. Along the front of collision, the crust has uplifted and folded and thrust and folded again into a mountain range over 1500 miles long and, at its roof, 5 miles high.

An ancient camel trail runs from Skardu to Gol, where the Hatch party began its first descent. A police jeep escorts us up the winding road to the put-in. Precipitous cliffs of somber rock, ancient metamorphic seabeds and long-frozen lava towers over the milky flow of the river and over us come to challenge it.

In the shadows we unload the two Avon rafts that will be home, hospital, diner and means of conveyance for the next three weeks. I slip down to the river's edge and dip my hand in the dark water, as Don Hatch had done on his arrival. It stings with the cold, though the air temperature is in the eighties. Captain Sohail Iqbal recounts that local lore tells of a bare-headed man who once stretched his legs into the water after a long overland trek and fell asleep in the sun. When he awoke, he found he was suffering from both heatstroke and frostbite simultaneously.

Since it is after the summer monsoons, the water is at a medium low level and dropping, whereas Hatch and crew arrived at the river's peak flow in July. We estimate the flow to be about 20,000 cubic feet per second. Beneath a wall of pictographs, depicting ibex and Buddhist temples, we make camp. I drift into sleep with the Indus softly calling at my feet.

The day dawns diamond clear. The boats are rigged, loaded, and launched with little fanfare beneath the curious, silent gaze of a score of Islamic villagers -- all men and boys. Almost at once the judgment of Don Hatch that the Indus was a river of deception rings true. Veteran oarsman Jim Slade steers the lead raft into what appears to be a moderate rapid, but the raft and crew are grabbed by a hidden hole and shaken like ice in a martini mixer. The Lion River growls its warning. 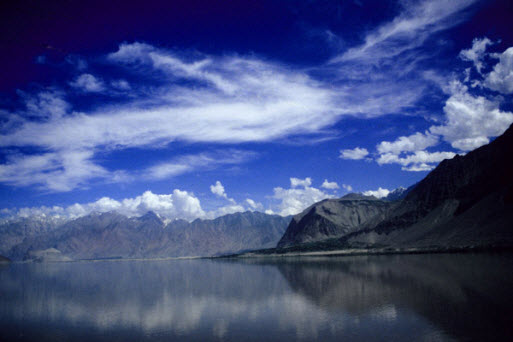 Slowly rolling through the big waves and hydraulics, our party makes its way down the gorge toward the huge cataract above Skardu, the point at which the Hatch party had been persuaded to move filming to a less dangerous tributary. With the lower water it doesn't look like the monster Hatch had described, and so I slide in with some semblance of confidence, sneaking down the left side, bumping between exposed boulders that would have been dangerous heads of holes in high water. Slade's run is also clean, and so, reassured by success, we set up camp just downstream.

Evening brings a villager floating down the river, on a craft more easily portaged around the big drops of the canyon. His is fashioned from six inflated goatskins, tied together with legs upright and supported by a framework of sticks. Using a pole rather than oars, he carries a cargo of fruits and vegetables downstream to the market at Skardu. The goatskins leaked, but to re- inflate a sagging portion of the vessel, he merely blew down the upright legs. After we trade rides on the two far-distant generations of inflatables, he floats off in the sunset towards Skardu.

In the sweet liquid light of the Pakistani morning, we push off and enter the natural amphitheater of Skardu, passing the first major tributary along the route, the Shigar River, which drains the Chogo Lungma and Biafo Gyang glaciers to the north. The Shigar increases the flow of the Indus by a third, and the current speeds past Skardu to the second night's camp at the Askandria Fort. Its origins are lost in history, but at least it is at least four centuries old; some say even older, dating from the time of Alexander the Great, whose easternmost thrust brought him to this region in the fourth century B.C. Standing on a narrow mesa 1000 feet above the Indus, the fort overlooks the entire Skardu basin, and has afforded an enviable security for its occupants -- whether rajas, Sikhs or Muslims, during the conflicts between India and Pakistan in just the past few decades.

Jagged peaks block the sun, filtering the slanting morning light as though in a cathedral. We depart the sanctuary of Skardu's valley and ride the current downstream into the gorge. At first, the rapids are runnable, though enormous in power and complex in design. By the start of the second day in the gorge, life gets hard.

The rapids become littered with huge boulders, which the water twists off, over and around to create enormous hydraulics and holes, some deadly. Portaging is the only course for some passages, an exercise anathema to river runners, a depressing tug on the leash by reality's grim hand. The portages increase in frequency and difficulty as we lurch downstream. Two crew members break toes in the carry-rounds. 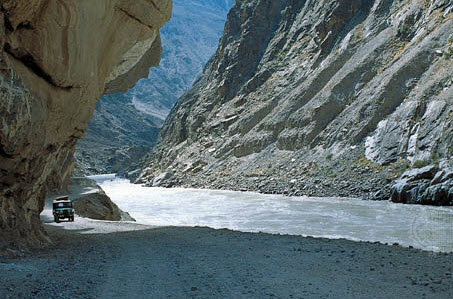 This is the second installment in a four-part series. Read the third here.