Let's say I tied your hands behind your back, set you in the driver's seat of a car parked at the top of a hill, shackled your feet so they couldn't reach the brake pedal, and then after you could see your predicament, I blindfolded you, put the car in gear, and you felt it slowly begin to roll down hill, gradually picking up speed. Imagine that for a moment. How would you feel? Scared, of course. But why?
It's the same question that needs to be answered to truly explain TrumpMania. Why is a serial-lying, xenophobic, offensively bombastic, crude, hate-mongering narcissist with a long list of business failures that suggest he is incompetent to run his own business much less the U.S. government or lead the Free World, appealing to so many? Yes he's doing it in part by playing to people's fears. But why are so many people so afraid in the first place? Because a lot of us, to some degree, feel like that driver in the car; worried, but powerless to protect ourselves, like we don't have much control over our lives and futures.
Doesn't that sound like how a lot of people are feeling these days? Powerless against economic trends that for decades have been leaving most of us behind, eroding our economic security and our sense of control over our lives, as Thomas Edsall documents so well in Why Trump Nowhttp://www.nytimes.com/2016/03/02/opinion/campaign-stops/why-trump-now.html.
Doesn't 'It feels like I can't control how things are going' sound like something people with more 'traditional' values are saying about the decades-long trend in America toward more open-minded positions on moral issues like gay rights, doctor-assisted suicide, even abortion, as documented in a Gallup Poll, Americans Continue to Shift Left on Key Moral Issueshttp://www.gallup.com/poll/183413/americans-continue-shift-left-key-moral-issues.aspx?utm_source=twitterbutton&utm_medium=twitter&utm_campaign=sharing?
Doesn't 'powerless' describe the feeling many of us share about political and financial systems being run by people far more interested in their own power and privileges than our interests, as noted by Peggy Noonan in Trump and the Rise of the Unprotectedhttp://www.wsj.com/articles/trump-and-the-rise-of-the-unprotected-1456448550;

The "unprotected American (is) one with limited resources and negligible access to power."

And aren't we left feeling powerless and vulnerable when we lose trust in the government, which we establish as a way to pool our resources and protect ourselves from threats we can't protect ourselves from as individuals? We need to trust that our government works for us, and answers to us, to feel safe. But survey after survey shows that most of us no longer believe government is of and by and for the people. Trust in government - and our faith that it's there to help protect us - has been eroding for decades. 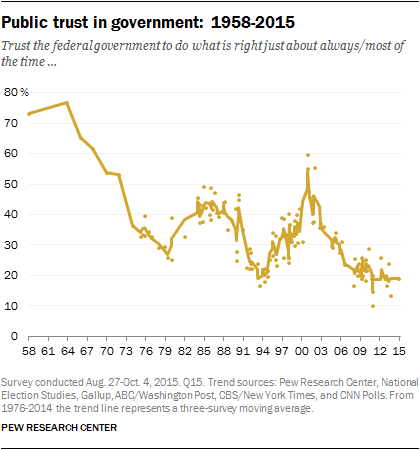 Powerlessness. Vulnerability. Lack of control over our lives and futures. These are the roots of the worry eating at millions of Americans. In response, social animals like us instinctively turn to one thing that can give us power and protection; we turn to our tribe(s). We empower ourselves by joining, or more actively supporting, something larger and stronger than ourselves...a community, the collective. After all, we're stronger together than we are alone. We affiliate with the group(s) whose views come closest to our own, and subconsciously adjust our views so they align more precisely with the group's beliefs. That demonstrates loyalty and thus merits the group's protection as well as enhancing its cohesion and power.
And in the name of loyalty to the tribe, we readily overlook or excuse the flaws of our leaders. You can hear this from many Trump supporters who, when presented with evidence of his lying, bigotry, or ignorance, say "Yeah, but he says it like it is." Which is an excuse, really, that translates to "All those flaws don't matter. Trump makes me feel like part of something bigger and more powerful. Unquestioning loyalty to Tribe Trump makes me feel safer."
Like many demagogues throughout history, Trump is tapping into the unsettling sense many of us have, that we have less and less control over our lives and futures, a feeling that has been building in many Americans for decades. Trump targets specific enemies - Mexicans, Muslims, immigrants, women, the Media - but these are just symbols. They're not what people are really worried about. What we're really worried about is feeling like we're in a car accelerating down hill, scared about what may lie ahead but unable to steer or brake or protect ourselves...powerless...threatened because we have no control.
Donald Trump's success arises in part because of his blunt arrogant angry style, his narcissistic self-promotion as nothing short of a savior, and his unapologetic serial dishonesty in the name of 'telling it like it is'. These are the hallmarks of many successful demagogues. But more than that Trump inspires because he has come along at a unique time in American history, when long-running economic, social, and political trends have combined to erode our confidence that we can steer and control our own lives. Membership in Tribe Trump offers true believers the feeling that they are finally able to fight back and re-take that control. As false as that snake oil salesman's promise may be, and as deceitful and phony and flawed as Trump himself may be, the deep imperative of safety and survival can lead us to see a lot of things in a lot of strange ways. Like seeing a President Donald Trump.

I am an Instructor at Harvard University and a consultant and speaker on the psychology of risk perception.