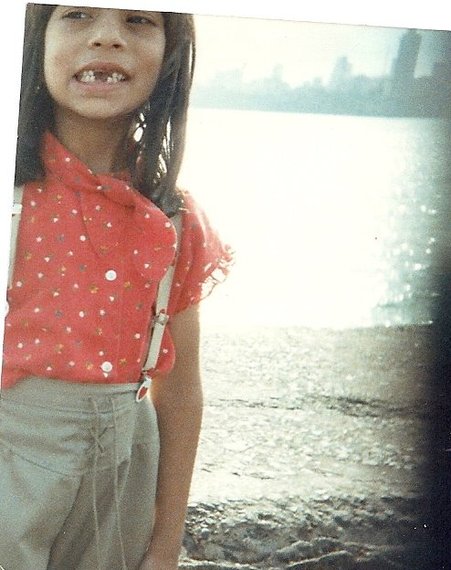 You know The Secret? How it became all the rage a few years ago? Well, I was way into The Secret (Abraham Hicks), and Law of Attraction way before they became famous on Oprah and housewives with bad perms picked up on it. What is Law of Attraction? It's the idea that everything in your life was attracted by you. The good and the bad. And you can change your thoughts to attract what you want.

If you ask me, all those New Age weirdos (Deepak Chopra included) just regurgitated Hinduism for crackers (and by crackers, I mean white people -- not saltines.) But I digress. The point is, my secret-ing powers were so strong, I was going to Catholic school whether I was ready or not.

I had been seriously thinking about switching schools for awhile now, but I wasn't sure if I was ready for a full-time uniform. After all, I still enjoyed picking out my outfits in the morning. And although Mom said I wasn't ready for high heels yet, I did get to wear my patent leather black Mary Janes every day, something I wouldn't get to wear in Catholic school.

But the magic of the universe was soon to intervene. When I was getting ready for school one day I inadvertently put on my red plaid skirt and white turtleneck, without even noticing how much it resembled a Catholic school uniform. I said bye to my pet unicorn, grabbed my ahi tuna nicoise salad (complete with green beans), and made my way to the bus stop.

The bus was pulling up just I made it to the stop.

"Oh balls!" I shrieked. I missed the bus constantly and I was pretty sure mom was going to poison me if I didn't start making it to the bus in time. So lately I had been skipping watching Josie and the Pussycats to the end and rushing to the bus stop. I couldn't believe I was about to miss that damn bus again!

I ran like lightning to make it on. I was huffing and puffing by the time I got onto the bus. I flopped down into a seat and put my Scooby Doo backpack on my lap. After I got settled and looked around, I noticed something peculiar. All the girls on the bus were also wearing red plaid skirts and white tops. Not to mention the fact that I didn't recognize anyone. How odd. I mean what are the chances of that? I wondered if I had accidentally entered an alternate universe or even worse, the Fifth dimension. All of a sudden I heard "RACHEL!!!!"

I turned around and saw Christina waving at me.

"What are you doing on my bus?" she asked

"I'm going to school. What are you doing here?"

"You're going to Catholic school?"

My plan was totally different. After I had spoken to the principal about visiting the school to see if it was a suitable fit, I would arrive on a large white stallion a la Bianca Jagger. Except I would be flanked by naked men.

But alas it was not to be. Now what? My mom was at work and I didn't really know any other grown ups. I stared at Christina, totally stunned.

"Christina what should I do?"

That would have been a good idea. Except for one small problem. Christina's mom thinks I'm a total biyatch. One day Christina had been in my backyard playing on the swings, when her mom came over to the chain link fence that separated our yards and waved.

Her mom was wearing brown polyester pants, a white and beige striped polyester button-down, and faux-leather brown loafers. Her hair was in pink rollers (as always) and she had some ugly faux-silk (notice the faux theme?) handkerchief tied around her head. She wasn't wearing a stitch of makeup. My guess was that she was 102 years old. But since she was devoutly Catholic and started spitting out kids at a young age she was probably more like 27, I later realized.

My mom, on the other hand, looked like Eva Longoria (albeit slightly bigger) with a perm and a power suit; it was the '80s after all. My mom never failed to leave the house in a fuchsia lipstick, blue eyeshadow, shoulder pads, and four-inch pumps, even if she was just getting the mail. In fact, my mom was pretty much the most glamorous woman in the entire neighborhood and definitely the only one with a career, not to mention the coveted Indian trophy, an M.D. degree.

I was staring at Christina's mom, wondering what the fuck happened to her to make her look like that when I said:

"Don't you think your mom is ugly?" I never was the most tactful person. Although I really didn't mean for it sound so... mean. It was merely a truthful aesthetic observation. Her mom looked like shit. How could no one realize this?

Christina looked over at her mom. I could see the little wheels turning in her head. She was seriously pondering my inquiry.

"Yeah I think she kind of is. Your mom is much prettier."

"I know, right?" Phew! At least she agreed with me.

We went back to playing and I thought all was well, until the next day when I saw Christina at the fence.

"Hi. I told my mom last night what you said about her being ugly and she started crying."

WTF? Why would she tell her mom I said that?? I gulped. Shit, I didn't mean for her mom to start crying!!!! Did I really just make a grown-up cry? My observing that her mom was ugly was no different than observing that I hate brussel sprouts. Just a mere statement of fact. Nonetheless, I did feel like a shithole.

"I'm really sorry! I didn't think what I said was that bad."

"Yeah me neither. She'll get over it." Christina didn't seem to care too much. Which was a relief. Now I didn't feel so bad. In fact we remained friends; her mom just never came over to the fence and waved anymore.

The point of this story is that asking Christina's mom to do me a favor and pick me up from Catholic school and take me to public school, was going to be REALLY awkward.

But I knew I had to bite the bullet. I didn't know any other adults, I definitely didn't have a cool older sibling that could bail me out, and my mom would surely kill me for taking the wrong bus. Plus unlike Christina's mom she had a job, so calling her was out.

"Um, OK. Sure can you call your mom when we get to the school?" I asked Christina.

I was so nervous the entire time I almost peed myself. Its times like this I'm really glad for potty training. What was I going to say? Did she remember what I had said? Better to just pretend nothing had happened.

When we got to Christina's school, she walked me to the principal's office where I explained my situation and Christina called her mom.

"OK, well I'm going to class now. We're learning how Satan shows up in everyday life. See you later." With that, Christina was off.

After what seemed like an eternity, Christina's mom walked into the office.

"Hi Mrs. Crab Apple." I shouted excitedly. I was grinning at her like a fucking hyena in hopes that she would see what a warm sweet child I was.

"Come on," she said irritably. I guess she wasn't too fooled by my fake chirpiness.

We sat in the car in stony silence. I decided I had to break the ice somehow.

"You look really pretty today." Of course she didn't. She looked like shit on a stick as always. In fact, if she was so upset by my previous remarks, I don't understand why she didn't do something to change her appearance. Like wear some lipstick for Christ's sake.

"I know what you said and you don't have to bother."

I sat there meekly, not knowing what to say.

"God will punish you for your sins. What you say to me or others has no bearing on me, only you. Sinners go to hell."

That was the second time a Catholic told me I was going to hell. First my aunt Selma when I made fun of my cousin Nick last year, and now this dumb bitch. And this was all before the age of six. I hadn't even had sex or done drugs yet. I thought it was funny that both Selma and Mrs. Crab Apple thought they were exempt from going to hell. One was drunk and the other one was polluting the world with her ugliness.

And what was up with all this hell crap? I knew I was going to be reincarnated. I prayed to my homie Krishna every night that I would come back as someone fabulous like Madonna or Cindy Crawford. Well fuck Mrs. Crab Apple and her negative attitude.

"Actually I'm going to be reincarnated so I'm not worried about it. But thanks for the 411." At that point we had reached my elementary school.

"Bye, thanks for the ride." I hopped out thoroughly relieved to be at regular old public school. The boys might be pussies, but at least I didn't have to listen to that hell B.S. all day. My parents and their Indian friends would make me feel inadequate for years to come, so the last thing I needed was to add Catholic school and that whole guilt trip into the mix.

So much for that plan. I guess I'll have to make my Bianca Jagger entrance another time.

Comedy The Secret Law Of Attraction