The LGBTQ* community -- indeed the country -- was recently traumatized as a result of one man's violent actions.

Noted as the worst terror attack on American soil since 9/11, and the deadliest mass shooting in U.S. history, the Orlando nightclub massacre shook our nation. Following this tragic event, 50,000 people gathered in Orlando to remember the beautiful lives that were taken, and much of the world -- including Sydney, Paris, and London -- stood in solidarity to mourn with us.

But can heterosexuals truly align with the LGBTQ* community to honor those that have died by inventing a world where homophobic phrases are hushed? It will take courage, but in order to stomp out homophobia, we must be willing to address the ways that homophobia insidiously creeps into our language.

Let's examine some phrases that I've heard people continue to use post-Orlando that dishonor the movement for LGBTQ* equality.

The human condition leaves most of us trying to survive in social situations by doing these two things: (1) looking good, and (2) avoiding looking bad. And since the world has already equated gay with the lesser, many heterosexuals live in fear of not wanting others to even think that they're gay. Many heterosexuals, like almost everyone, want to look good, and want to avoid looking bad to the rest of the world. Heterosexuals fear that they will be targeted, isolated, and even discriminated against for being perceived as gay. These self-imposed insecurities prevent some heterosexuals from truly connecting with the LGBTQ* community, because this way of thinking can be used as an excuse for maintaining distance from the LGBTQ* community.

It's worth noting that [straight] men confront their fear with brilliant creativity. High-schoolers accuse each other, their activities, and even objects of being gay with precisely the zero-tolerance attitude that they themselves are navigating. In college they played chicken, where two guys each slide their hand up the other one's inner thigh. Whoever gets freaked out first loses--or wins, really. These games aren't just grounded in disgust with homo sex; they are playing out exactly what society has taught men about heterosexuality: One wrong move, and you'll be permanently marked.

"I'm OK with gay people, as long as they stay at a distance."

Turning a questionable phrase around, usually is a good test of whether something sounds a little off or not. I would do this when people would ask me questions like, "Were you born gay?" and "How do you know for sure that you're gay if you've never tried heterosexuality?" The looks on their faces when I would ask "Were you born straight?" and "How do you know for sure that you're straight if you've never 'tried' a same-sex relationship?" would bring me much entertainment. Similarly, turning this phrase around could easily be, "I'm OK with black people, as long as they stay at a distance." Having caveats about a group of people raises some red flags for me that perhaps some prejudices exist that should be examined.

"I'm not OK with a trans person using the same bathroom as me."

(To prevent confusion, I recognize that this statement is a transphobic statement and not a homophobic statement.) In the past few months, our country has been in hysterics over where transgender people, who identify with a gender different than the one assigned to them at birth, can pee. How did the US get to a point where bathrooms, out of all things, are at the center of the country's culture wars? While the issue is now being used primarily against transgender people, historically bathroom fears have been regularly deployed against civil rights causes. It was used against black people to justify segregation -- by invoking fears that black men would attack white women in bathrooms. It was also used to block the Equal Rights Amendment, which tried to establish legal equality between men and women. Opponents claimed it would lead to the abolition of bathrooms for different genders, potentially putting women in danger. These claims aimed at dismantling justice in the 1960s are just as egregious as the current claims against the transgender community. 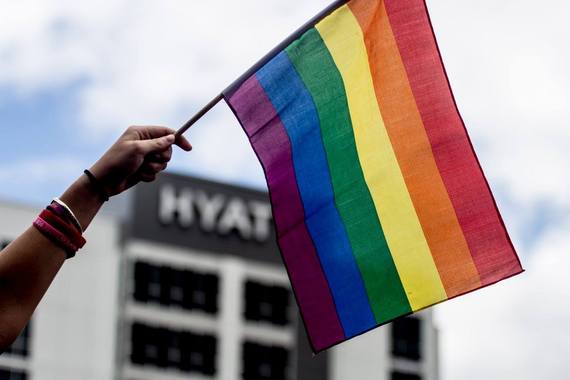 The next steps are simple. Examine how phrases like these and others enter our daily conversations about the LGBTQ* community. Ask questions about where these comments originate. Meet your peers with curiosity. For those that already are an activist, Tweet me at @corgbon some of the comments you've heard and your responses. Share with them your outlook, and together, these small steps will hopefully begin to change perceptions about the LGBTQ* community.