Police identified the shooter as Thomas A. Caffall, 35, of College Station. Caffall's mother, Linda Weaver, reached by The Huffington Post, said her son was having "difficulties" with his mental health in recent years.

"The minute I saw the TV I knew it was him," said Weaver. "I've been that worried about him."

Caffall opened fire from inside his single-family home, according to Rigo Cisneros, 40, who witnessed the shooting from across the street. Cisneros, an Army medic and Afghanistan veteran, saw police exchanging gunfire with Caffall, who remained within the house. Caffall was shot several times by officers who stormed the house after a shootout that lasted roughly 30 minutes, Cisneros said.

A badly wounded Caffall was dragged from the house by officers. Cisneros attempted to provide first aid. While he was being treated, Caffall, mumbling his words, "asked me to apologize to the police officer," Cisneros said.

Caffall, Bachmann and Northcliff were pronounced dead at the hospital. Two other College Station police officers were injured in the gunfight. Barbara Holdsworth, 51 years old from Houston, was rushed into surgery. Her name was not released by police. None of the injuries appeared life-threatening, police said.

Officers Justin Oehlke and Brad Smith were treated and released from the hospital. Officer Phil Dorsett was treated at the scene.

A Facebook page belonging to Caffall features several photos of assault rifles, including a Czech-made version of the AK-47. On the page, Caffall identified himself as divorced, with “Christian” religious beliefs. He lists a series of snipers, including Carlos Hathcock and Vasily Zaytsev, as "inspirational people."

“I am pulling a cross between Forrest Gump and Jack Kerouac (without the drugs),” Caffall wrote on the site. “I'm on the road, permanently.”

Caffall commented on Facebook about several recent gun purchases, including a vintage Russian rifle. “I just got a new toy,” he wrote in May 2011. “I’ll be at the gun range as much as I can.”

Weaver, his mother, said she had been estranged from her son over the past several months. She said he had not visited her after she became seriously ill.

She added that she was horrified at the loss of life. "If you're going to commit suicide, why take all these other people with you?" she said.

In an interview with KPRC, a local television station, Caffall’s stepfather, Richard Weaver, said Caffall was a “ticking time bomb” who quit his job nine months ago and vowed never to work again.

"He was crazy as hell," Weaver said. "At one point, we were afraid that he was going to come up here and do something to his mother and me."

This article was updated to identify and give a more precise age for Barbara Holdsworth, the female wounded in the shooting. 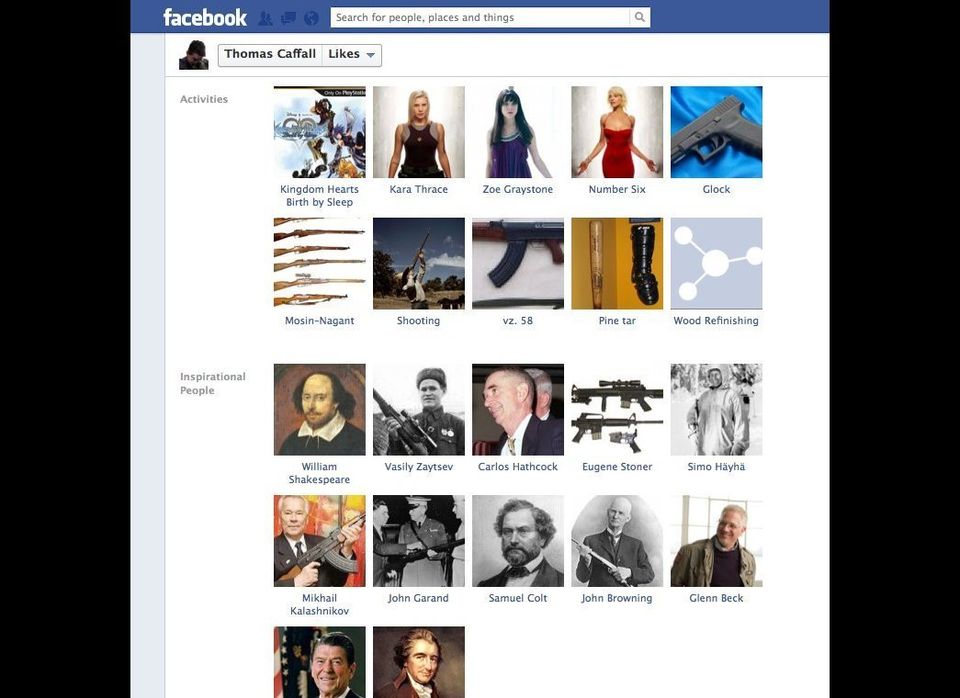