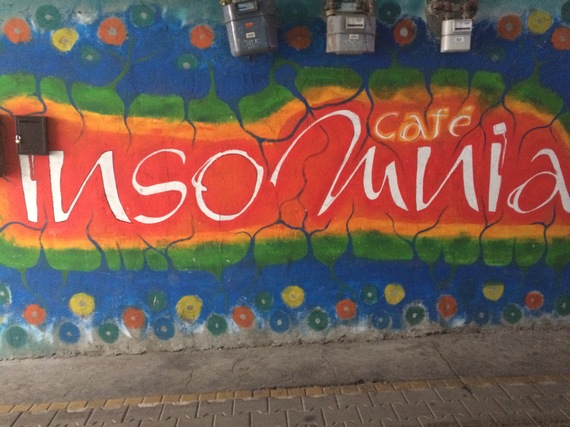 Poets be warned. Only in Romania is there a poetry reading series known as the slaughterhouse. It's called Thoreau's Nephew (Nepotu´ Lui Thoreau) and takes place in a brightly painted, very smoky (well, smoky until mid-March, when the legislation changes) bar called Insomnia--sounds like a literary purgatory, doesn't it? I was invited to read there in 2013 while in Romania for the first time. In Sibiu the night before my 5-hour bus trip through Transylvania, a friend called out to me across Piața Mare, The poets in Cluj are not so nice!

Thoreau's Nephew is a bimonthly club de lectură that was formed in 2008 by a group of writers, critics, and professors one night at Insomnia over drinks: Ștefan Manasia and Ștefan Baghiu (poets and critics), János Szántai (writer and film professor), and François Bréda (writer and theater professor). Their question: how could they transform this bar into a literary space where Romanians and Hungarians could feel at home?

Why the name, you might ask. Manasia says they were thinking of Henry David Thoreau's Walden, and, in particular, that they saw Thoreau as a main figure of the anarchist movement. A perfect father for an anti-establishment poetry night. The name is tricky, though--in Romanian, nepot means both nephew and grandson. So, in a sense, the inspiration for this lecture club is that of legacy--one in which free speech is the law of the land.

Here's how it goes. The poems are printed and placed on all the tables in the bar--and, if they aren't written in Romanian, translations are provided when available. The reading begins like any other. One of the Ștefans introduces the featured poet, who then reads for 20-30 minutes. (The most surprising part of this portion of the night is that everyone in the bar--the audience, on average, 60-80 people--is silent and listening, or reading and listening, to the poems.) After this is when the fun begins. The microphone is handed over to the audience. As Manasia puts it, Everybody becomes a literary critic for a couple of hours. This, he thinks, explains the success of Thoreau's Nephew. Anything goes, and it does. Some people speak just to hear themselves talk (as with any Q&A), others debate from different corners of the room. The critiques build momentum, are known for getting tense. Meanwhile, the poet watches, listens, drinks (featured poets receive drinks on the house). "Rather than love, than money, than fame, give me truth." In this context, Thoreau's sentence from Walden really hits home. The audience is honest, anything but gentle. It's true--they're not nice.

Manasia says they didn't expect to have such a big success, big audience; but, from the beginning, it was the best literary event in town. In addition to Romanians and Hungarians coming to feel at home in poetry, the regular audience consists of lawyers, doctors, philosophers, painters, professors, critics, students, and general lovers of poetry. They come here and take the mic and say beautiful things, ordinary things, or crap about poetry.

A lot of writers call us the literary slaughterhouse, he says. I was a lucky survivor. I got invited back to read last month, and couldn't wait. For two whole hours after my reading the audience went back and forth about atmosphere, strangled tone, too much description, not enough description, relevance vs. irrelevance, craft and content, black holes (the subject of one of the poems). Even the bartender got involved: You cannot see what exists in the black hole--but if you feel it, there is a poem. During one particularly tense moment, Manasia leaned over and said, This is a literary death match. I told him later that, to the best of my knowledge, we have nothing like this in the U.S. And I couldn't wait to tell all of you about it.

On poets after their readings, Manasia tells me, Most of them are destroyed and they hate us for a while. And, Some people are invited back but refuse because they're afraid. One older poet, speaking about his reading, said it made him feel like he was a student again. And, about two poets who read once and might never come back, They were sacrificed like two lambs.