In every American city, you see them. Even in small town America, you see them. Sometimes standing on the street in a small group. More often you see them working -- washing dishes in a restaurant, cutting a lawn in suburbia, picking produce in a field, pushing a wheelbarrow at a construction site. I'm talking about Mexican men in the United States. Mexican men who are here illegally.

What we do not see, do not hear about, never even think about, are their families left behind in Mexico.

Those Who Remain (Los que se quedan), directed by Juan Carlos Rulfo, one of Mexico's most acclaimed filmmakers, and Carlos Hagerman, best known for several excellent shorts, focuses on these families who remain in Mexico. It is an intimate, sensitive, beautifully shot documentary. Without narration, there is little to diminish the power of the families' stories and little to distant you from their pain. 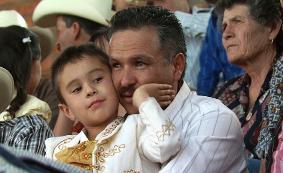 There are the children, whose longing for their absent fathers is the most heart-wrenching. When a young teenager cries for her father -- well, it's nearly impossible to watch. The wives, lonely, not only miss their husbands but must also run a household without them. Elderly parents, approaching death, with time quickly slipping away, and their children far away. Is this the way life should be? It makes you wonder: Is the money really worth it?

There is a family that leaves home to sneak across the border and join the husband-father. Their fear is palpable. One daughter does not want to go. Everyone starts to cry. There is a devastated wife whose husband was murdered "up North." Your heart bleeds for her. There is a man who returned to Mexico, brought money home and purchased land. He seems content. Yet there are many more men who never seem to return. An army of Mexican men battling for the money on that hard battlefield called "el Norte".

Although Mexico has a rich, vibrant culture, this absent of working males -- some villages are emptying out of young and middle-age men -- is, to me, disconcerting. And it may be dangerous for Mexico. Widespread pain and sadness on the individual human level over time works its way into the fabric of a society and eventually erodes the culture. When that happens, watch out! With major bread winners working in another country, the national economy of Mexico is unable to develop. The remittances that return to Mexico are channeled into individual families' enrichment, not productive assets for the development of the national economy.

Of course not all Mexican men "cross over" to the North, there are those who "hold out." Although their voices are included, the focus of Those Who Remain is on the families who remain in Mexico. An interesting segment is a man and wife attempting to decide whether he should "cross over."

What Those Who Remain does not answer, does not ask, is why. Not the "why" that is answered in the film, "because we need money." Money for a new house or repairs to an old house, money to purchase an automobile, money to send the children to school. I want to know why that money is not available in Mexico. Why the Mexican economy is a failure for so many Mexicans?

Many will not see this as a defect of the film, after all, the purpose of Those Who Remain is to zero in on those left behind in Mexico, which it does extremely well. It reveals the heavy price paid by the families of the men who are off making the money. That, in itself, is certainly a worthy goal for a film.

Regardless of your position on illegal workers in the United States, Those Who Remain will move you emotionally, and give you a clearer understanding of why Mexican men continue to stream into this country. Insights that are needed to help resolve a serious immigration problem in our country.