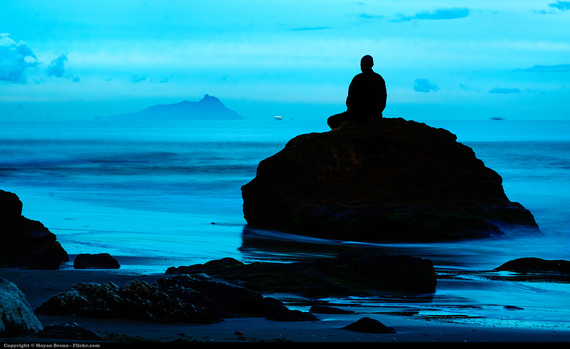 The tired cliché that claims, "You can't teach an old dog new tricks" is being effectively laid to rest once and for all. The integration of contemporary science and ancient contemplative practices is proving that, regardless of age, we are capable of altering our bodies and our minds for the better. This is great news for those of us interested in continuing to create and sustain a healthy lifestyle.

Doing what it takes to maintain a healthy lifestyle isn't just about living longer. More deeply, it's about our heart's desire to live better and love more. It's not enough just to be alive to see our grandchildren and great grandchildren get married. We want to be able to dance at their weddings. And in order to turn that possibility into a reality, we must learn how to increase our well-being with each passing day.

All of us grapple with the tendency to become "stuck in our ways." But it's encouraging to remember that well-being is more than a state or a condition that you have or do not have. It's actually a skill that can be acquired.

Even through the first half of the 20th century researchers believed that changes in the brain could only occur during childhood. By the time we reached adulthood, it was believed that the brain's capabilities were fixed and permanent.

But as long ago as 1890, psychologist William James, often referred to as the father of American psychology, believed that the brain was capable of so much more. In his book, The Principles of Psychology, he wrote, "Organic matter, especially nervous tissue, seems endowed with a very extraordinary degree of plasticity."

Because of our amazing advances in technology, researchers are now able to look at the brain's inner workings. As a result, the field of neuroscience is flourishing.

Neuroscientists are now estimating that the human brain is composed of between 86 and 100 billion neurons.

Dr. Richard Davidson, neuroscientist and founder of the Center for Healthy Minds at the University of Wisconsin, Madison, believes that practice is the key element in changing our brains for the better. He is well known for his pioneering study with Buddhist monks. In that study he hooked the monks up to fMRI machines and observed their brains as they meditated. The monks produced gamma waves, indicating intensely focused thought, which were 30 times as strong as the control groups.' Additionally, large areas of the meditator's brains were active, particularly in the left prefrontal cortex, the part of the brain responsible for positive emotions. This study showed that conscious effort can change the neural structure, activity and function of the brain.

Similar to the inspiring theme of the film Field of Dreams, "Build it and they will come," Davidson's motto seems to be, "Exercise them (neural pathways) and they will strengthen." A practical, user-friendly application of his research suggests that one way of doing this is by practicing a positive outlook toward others.

In his book, The Emotional Life of Your Brain, he refers to a study in which he divided his research subjects into two groups. One group was taught cognitive behavior strategies, which involves changing your beliefs, attitudes and ideas.

The second group was taught loving-kindness meditation, a secular form of compassion training in which you extend love and care to others. Both groups were instructed to practice 30 minutes per day over a period of two weeks. Brain scans were conducted for both groups before and after the two weeks. Following this modest amount of practice, the second group that practiced loving-kindness meditation showed significant changes in the area of the brain that predicted pro-social behavior.

In another example, Davidson suggests that if you find yourself having a negative outlook on life you can practice the delaying of gratification. He explains that a negative outlook may indicate that you have low activity in the pleasure and reward centers of the brain and low activity as well in the pre-frontal cortex. In order to increase your positive outlook he recommends this strategy, "When you find yourself in a situation in which you are tempted by an immediate reward but you know the smarter, safer, healthier, or otherwise better choice is to wait for a future reward of higher value, pause and focus, on the more valuable future reward."

Here is a practical example.

While you are preparing a healthy salad for lunch, choose not to grab and eat that jumbo cookie sitting on the counter that seems to be calling your name.
Instead, train your brain to recognize (pause) and avoid the temptation (focus).
Save your appetite (just a few minutes more!) for enjoying the salad that you are preparing.

By doing this you will be retraining your neural circuits by delaying gratification which then engages the prefrontal cortex to increase activity in the reward center of your brain. It is this increased activation of the reward center of the brain that leads to a more positive outlook on life.

As a result of his findings, Davidson asserts that we can learn how to take responsibility for our minds by shaping our brains through additional practices that promote resiliency, self-awareness, attention and altruism.

Scientists have discovered that when we put our feelings into words we also increase activity in the prefrontal region of the brain. As we learn to identify, label and express emotions, this area of the brain is strengthened. As a result, we are then better able to respond to our feelings less reactively and more responsively. (See Ornish Living article, The Science Behind Why Naming Our Feelings Makes Us Happier)

In his book, Mindsight, neuroscientist, Dr. David Siegel, supports the idea that by practicing reflective skills we can activate circuits in the brain that promote well-being. He wrote, "Inviting our thoughts and feelings into awareness allows us to learn from them rather than be driven by them. We can calm them without ignoring them. We can hear their wisdom without being terrified by their screaming voices".

To illustrate this he offers this straightforward suggestion. Instead of saying, "I am sad" (defining yourself by your sadness), learn to reframe your feeling this way, "I feel sad." This simple adjustment will help you to identify a feeling without being consumed by it.

While some may fear that focusing on developing skills to increase one's well-being will result in self-absorption, the opposite is true. As we begin to feel less distracted, stressed and bullied by our thoughts and feelings, we can feel calmer and clearer. As we become more attuned internally, as our stress hormone and blood pressure levels decrease, it becomes possible for us to cope more effectively externally. Our fuse gets longer. Our positive outlook returns.

It is true that continuing to hone and develop our self-awareness, attention and focus is surely a gift that we give to ourselves. But remember that it is also a gift that will aid us in sharing our best self with those we love.

We don't come preassembled. Each new day is an opportunity for ongoing renewal and growth. We are much more than simply the sum of the connections between neurons in the brain. We are wondrous physical, mental, social, emotional and spiritual beings. In the Ornish Reversal Program (Intensive Cardiac Rehabilitation) Dr. Ornish offers this reminder, "Our Genes Are NOT our Fate."

It's exciting, hopeful and motivating to realize that we can improve the quality of our lives as we uncover and acquire practical ways to increase our well-being.

What practices have you chosen to increase your well-being?