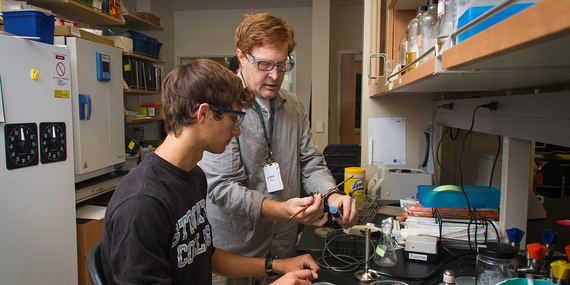 When you attend a big college, it can be easy to get lost in those 400-person lecture halls run by one tired professor and maybe a TA or two. To this professor, you don't have an identity. In fact, you probably aren't anything more than a seven-digit ID number, if even that.

It doesn't matter if you're one of the students who comes to class every day and does well on the four exams that make up all of your grade. You could be the ghost student who only shows up to the final. You could be the student enjoying a Netflix marathon during the lecture. He might recognize you as the student with the Macbook sitting in the front, sporting her team's athletic gear, but he'll never know you.

His class was an editing class, one from the communications department that fulfilled a requirement for my education degree's emphasis on language arts. I had never taken a journalism class before.

For the first few weeks, I was lost in the pages of my AP Stylebook, searching frantically to find whether the number "seven" should be written as a word or as a figure. Do I capitalize this title? Is the word "fireman" stylistically acceptable? Is "October" abbreviated? HELP!?

Not only did this professor see that I was struggling, he talked to me individually and allowed me to take home these AP Style assignments. He answered every single one of my panicked questions with a smile, and after a few months, turned me into a passable editor.

One day, he came up to me while we were writing headlines and told me about an editing position on the university's newspaper. He strongly encouraged me to apply, but I told him that my athletics commitment would interfere with the position's hours. I could see that he was visibly disappointed, but I didn't want to take the position from someone who could commit to it fully.

The following semester, I took another of his classes, a newswriting class. We had been practicing writing full stories, and upon returning an assignment, he asked me with a huge smile if I wanted to switch majors and become a journalist.

I had rarely come across a professor who not only commended my work, but also told me that it meant something, and was worth pursuing. I'd had professors tell me that I was a good writer, but he did more.

He saw promise in me, taught me, guided me, and showed me that he wanted me to succeed and pursue something. He believed in me. He is the reason I began to consider writing as more than just a hobby or requirement for school.

To the professors who do more than just lecture, assess, and repeat, you leave more of an impact than you know. Thank you. You make me proud to know that someday I'll stand at the front of my own classroom.

I Modeled for a Nude Centerfold

A Guide to Breakups