Some Halloween costumes tend to toe the line between "offensive" and "provocative," but these George Zimmerman and Trayvon Martin costumes leave that line so far back in the rearview mirror it might as well have never existed. 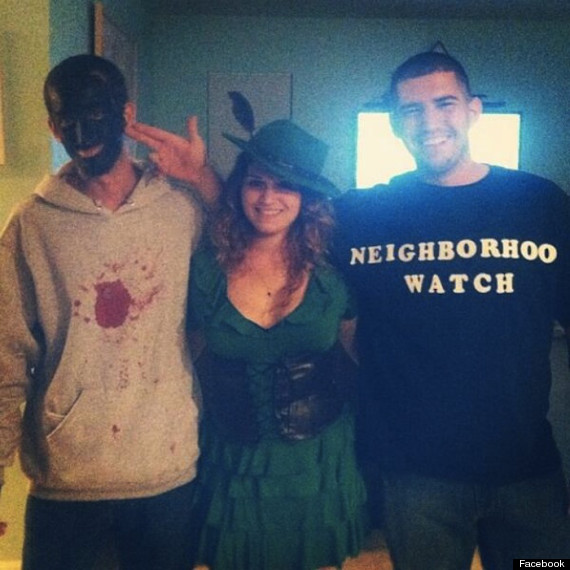 A group costume features a man dressed as Martin, wearing blackface and a blood-stained hoodie, and a man portraying Zimmerman, wearing a shirt that reads "Neighborhood Watch." In a photo uploaded to the Facebook account of Caitlin Cimeno, the woman in the picture, the man portraying Zimmerman has fashioned a gun out of his right hand and has pointed it at the man dressed as Martin.

Cimeno's Facebook account has since been deleted, but the photo has gone viral and elicited widespread condemnation. (Per Gawker, one of the men chose to set the photo as his Facebook profile picture before then swapping it out and setting his profile to "private.")

According to the Smoking Gun, the men in the Martin and Zimmerman costumes are residents of Florida, where the Zimmerman case took place.

The Stir's Lisa Fogarty takes particular issue with the pair "choosing to make light of the murder of a 17-year-old child." She also adds that the men, aged 22 and 25, aren't naive children who made a regrettable choice: "[T]hese men are too old to not know or understand that it's also disrespectful to the family that is grieving for Trayvon."

Now that I have see a pic of a Trayvon Martin and George Zimmerman costume duo replete with black face I guess I've seen it all.

When I saw the George Zimmerman and Trayvon Martin costume photo on IG I durn near fainted. It's amazing what some find acceptable/amusing.