Every year at Tufts, student groups design T-shirts to celebrate Spring Fling. This year, members of the crew team were punished because their T-shirts said "check out our cox": 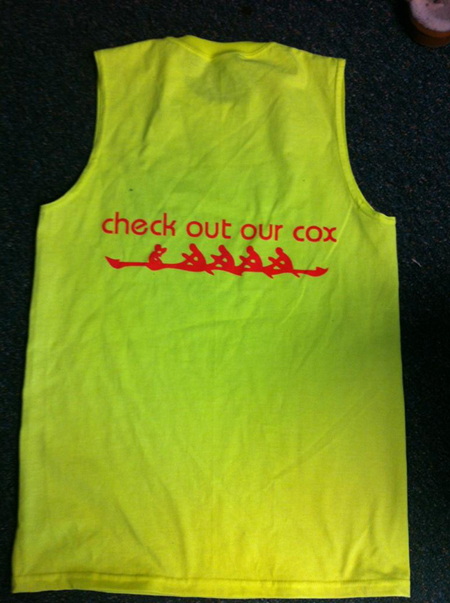 Members of the team aren't talking publicly, but we think we know what happened.

First, someone filed a "bias incident" report at Tufts, and then a dean actually took it seriously and notified the coaches. This is sad to begin with. Puns flourish on late-night talk shows and on college campuses (and in Shakespeare for that matter), but college administrators all too easily lose their sense of humor when confronted with a complaint.

To make things worse, the dean apparently said that the content of the T-shirt was "too phallic and promoted aggression and rape." I kid you not.

I just don't see any promotion of aggression here, and certainly not promotion of sexual assault. This year, there actually was a T-shirt that at least two women wore that has a closed fist facing the viewer and the word "pop," with the number 2012 on the fist. Does anybody really think that promotes violence? (Also, see last year's Delta Upsilon T-shirt. Can you guess DU's pun ahead of time?)

Anyway, to prevent Tufts from taking action through its disciplinary system, the crew team's coaches punished several team members. As the story goes, Director of Rowing Gary Caldwell instructed the lower-level coaches to punish the students, and then he and the dean would approve of the punishments. As a result, enough members (no pun intended) were suspended just long enough to have no full team available to row at this weekend's championships, but they will be able to row next week. Two students lost their positions as captains, too. The students also reportedly have to write apology letters to the dean.

All because of a very tame T-shirt. Call it creative or sophomoric or both, it's obviously the kind of speech that would be protected by free speech principles.

Tufts is a private university, but it promises its students that it "is committed to free and open discussion of ideas and opinions" and that "Tufts believes free inquiry and expression are indispensable in attaining the goals of the university." Parody, satire, humor, and puns are fully part of the marketplace of ideas, and it is unacceptable for a university like Tufts to violate its promises and abuse its "bias incident" policy--designed for reports of genuine problems such as racist graffiti--to decide which jokes may or may not be told on campus.

And this is nothing new for Tufts, which has been on the Foundation for Individual Rights in Education's (FIRE, where I work) "Red Alert" list for years due to its severe violations of its promises. Tufts has been trying to punish "sexist" T-shirts going all the way back to the "Why Beer Is Better Than Women at Tufts" T-shirts in 1989.

Humor is thriving on television and just about everywhere else in our society, but one of the most dangerous places to tell a joke in public is a college campus. That's ludicrous.