WASHINGTON -- Turkey made its boldest move yet against the Islamic State over the weekend.

It wasn't to help the U.S.-led air campaign against the group, something Turkey could do by making its strategic Incirlik Air Base available to American jets. It wasn't, as has been the case for Egypt and Jordan, to avenge an attack by the extremist group on its nationals. And it wasn't to aid the Syrian Kurds of Kobani, who faced an Islamic State assault for months as Turkish tanks stood idle on nearby hilltops.

It was, instead, because of history.

Turkey sent tanks and hundreds of troops into Syria late Saturday to save a celebrated shrine threatened by Islamic State militants.

The shrine is the tomb of Suleyman Shah, whose grandson founded the Ottoman Empire. That empire, the immediate predecessor of the modern Turkish republic, decayed for centuries and eventually collapsed after World War I. But many Turks -- among them Turkish President Recep Tayyip Erdogan -- see the Ottoman period as their nation's grandest moment. Though the tomb is in Syria, where Shah is thought to have died in the 13th century, Turkey retained control of it through a 1921 agreement with Syria's former colonial ruler, France.

That arrangement, like others in the region, appears to have worked fairly well until the Islamic State entered the picture. Militants linked to the extremist group and other rebels who seek to take portions of Syria from the regime of Syrian President Bashar Assad have been operating near and indirectly threatening the Suleyman Shah shrine for months. In March 2014, Ahmet Davutoglu, Turkey's then-foreign minister and current prime minister, said his country would counter any assault on the mausoleum.

“Should there be an attack, either from the regime, or radical groups or elsewhere, it would be countered equally,” Davutoglu said, according to The New York Times. The comments made clear that the Turkish government, a vocal opponent of Assad, would enter his country to defend the shrine.

The incursion over the weekend was the first overt Turkish participation in the four-year Syrian civil war. Reports say up to 40 Turkish soldiers were rescued from the shrine, along with the historical remains and relics stored there. One Turkish soldier was killed in an "accident" during the operation, the Turkish military said. Whether the Turks had to actually fight off Islamic State militants remained unclear.

The government was reportedly nervous that the Islamic State would take the soldiers stationed at the tomb hostage, the way it kidnapped 46 Turks and three Iraqis working with them when it took over the Iraqi city of Mosul over the summer. (The 49 hostages were eventually released under circumstances that remain murky.)

The fighting around the shrine had become more intense in recent days as Syrian Kurdish fighters, fresh from a victory in Kobani, were advancing against fighters with the Islamic State, or ISIS.

Two Turkish newspapers, multiple Kurdish sources and a Turkish security source interviewed by Reuters said that the Turkish troops that went to the tomb, 20 miles from the border with Syria, passed through Kobani. That would represent an easing of tensions between the Turks and the Syrian Kurds, whose relationship has historically been poor because of the Syrian Kurds' connection to a Kurdish movement that has battled the Turkish state. That relationship worsened when the Turks failed to substantively support Kobani -- and, it appeared, permitted ISIS to exploit territory they had abandoned. An improved relationship would be very good news for the U.S.-led fight against ISIS.

The Assad regime, which has made its own efforts to look like a partner to the U.S. against the extremist group, blasted the Turkish move. Turkey is helping the U.S. to train and equip anti-Assad moderate Syrian rebels battle ISIS.

The ancient relics -- which include three important sarcophagi -- are, for now, being kept at another burial site in Syria, one much closer to the Turkish border (and to the Syrian Kurds.) Though Turkey has destroyed the old mausoleum, Davutoglu said it would like to return the artifacts to that site eventually.

See below what the monument looked like before the raid to rescue it from ISIS -- and what has happened to its celebrated relics since. 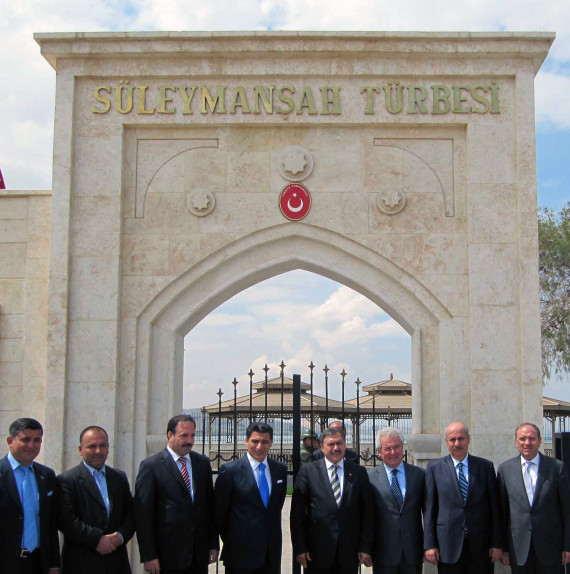 FILE - In this April 7, 2011, file photo, Turkey's Minister of Foresty and Waters Veysel Eroglu, fourth from right, and unidentified Turkish officials are seen during a ceremony at the entrance of the memorial site of Suleyman Shah, grandfather of Osman I, founder of the Ottoman Empire, in Karakozak village, northeast of Aleppo, Syria. (AP Photo/ Ministry of Foresty and Waters.) 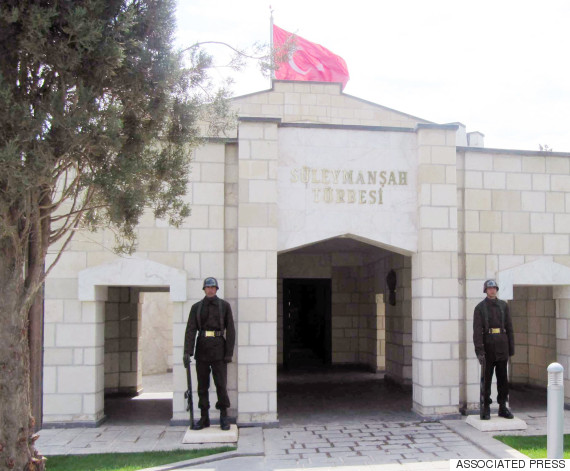 FILE - In this April 7, 2011, file photo, Turkish soldiers stand guard at the entrance of the memorial site of Suleyman Shah. (AP Photo/File)

In this April 7, 2011, file photo, Turkish soldiers stand guard during a ceremony at the entrance of the memorial site of Suleyman Shah. (AP Photo/ Ministry of Forestry and Waters, File)

New position of the Suleyman Shah mausoleum is pictured from Turkish side of the border as Turkish army vehicles move inside Syria on Feb. 22, 2015, at Birecik in Sanliurfa, during an operation to relieve the garrison guarding the Suleyman Shah mausoleum in northern Syria. The operation was jointly conducted by the intelligence organization and the Turkish army, a few days after reports suggested that the tomb was besieged by jihadists belonging to the Islamic State. (ILYAS AKENGIN/AFP/Getty Images)

Military ceremony for Halit Avci, the soldier who died as a result of an "accident" during the Suleyman Shah tomb operation in Syria, on Feb. 22, 2015. (Veli Gurgah/Anadolu Agency/Getty Images)

Soldiers stand during a ceremony held for coffins brought from the tomb of Suleyman Shah to a provisional tomb in Syria on Feb. 22, 2015. (Okan Ozer/Anadolu Agency/Getty Images) 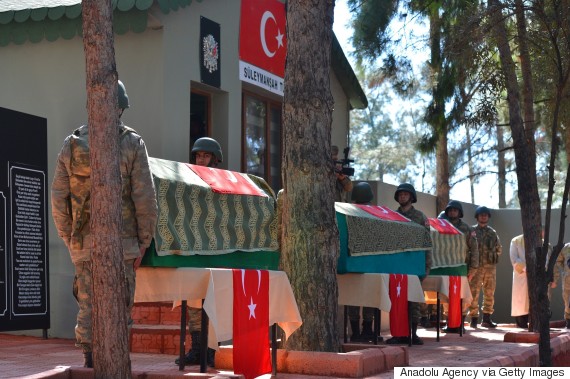 Soldiers stand during a ceremony held for coffins brought from the tomb of Suleyman Shah in Karakozak village, northeast of Aleppo, Syria. (Okan Ozer/Anadolu Agency/Getty Images) 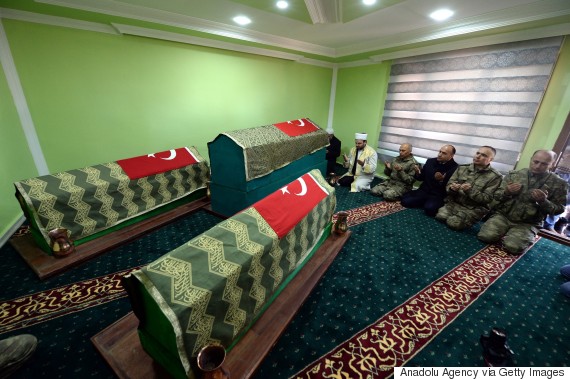 Soldiers and an imam pray beside coffins brought from the tomb of Suleyman Shah in Syria to a provisional tomb on Feb. 22, 2015. (Okan Ozer/Anadolu Agency/Getty Images)