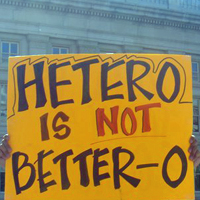 If you are straight and oppose equality for gay and lesbian people, I'd like you to reflect on two specific questions. Firstly, when did you "choose" to be straight? Secondly, do you think being straight is a "lifestyle choice"?

Based on knowledge of your own sexuality, you may think these questions are totally ridiculous, or you may not even understand what they are referring to. Straight people are rarely asked such questions, and it explains, in part, why a video exploring the topic recently went viral online, garnering millions of views.

Frustratingly, gay and lesbian people are repeatedly subjected to this bizarre line of questioning (about our sexuality), both in our day-to-day lives and in our quest for equality at a political and societal level. Not only is this notion that people choose to be gay or lesbian totally absurd, but it demonstrates a lack of understanding of two different components of human sexuality: sexual orientation and sexual behavior.

For most people who are gay or lesbian, the idea that we "choose" to experience sexual attraction to people of the same sex is nonsensical. So rather than continually having to respond to this ridiculous notion, it's worth flipping the question and asking the following of those straight people who support the "choice" myth: When did you choose a heterosexual orientation? Most straight people are completely unable to answer this question, and the reason they can't is that their sexual orientation is not something they chose at any specific point in their life. Additionally, the notion that all human beings should biologically have a heterosexual orientation completely disregards the natural diversity that is seen across other biological traits (e.g., race, height, primary hair color, and handedness).

In many regions around the world, heterosexism and homophobia continue to cause havoc in the lives of gay and lesbian people. Within this context of discrimination, one of the most used "weapons" of those against equality is the notion that people "choose" to have a homosexual orientation. It is important to challenge this myth, because it forms a key part of opposition to equal rights for gay and lesbian people. In a recent poll by the Pew Research Center (May 2013), roughly 40 percent of Americans indicated that they believe being gay/lesbian is a choice. Those who hold such beliefs are typically less supportive of equality for gay and lesbian people. Challenging this myth that homosexuality is a choice can therefore help overcome discrimination.

The myth of choice in relation to sexual orientation fuels a process of dehumanization that focuses disproportionately on the sexual behavior of gay and lesbian people. Within this context the biological and unchangeable nature of sexual orientation is completely ignored, and all focus is placed on sexual behavior. This excessive focus on behavior dehumanizes people who are gay/lesbian, because it reduces us to behavioral acts and ignores our identities as human beings independent of our sexuality. Those who push the notion that sexuality is a "choice" generally fail to make the distinction between sexual orientation and sexual behavior, believing (erroneously) that the latter is the core and definitive component of human sexuality. They also typically ignore the fact that the volitional nature of sexual behavior applies equally to heterosexual people.

The only "lifestyle choice" associated with being gay/lesbian is whether to be open about one's identity or live in the closet. Straight people aren't forced to make this type of "lifestyle choice," and there is no pressure for them to "come out" in a society that is primarily structured around heterosexual culture. As such, straight people are free to go about their lives without being subjected to excessive external scrutiny of, and focus on, their sexual orientation. Gay and lesbian people, however, are forced to consciously make the choice to live openly in society, or not. In doing so, those of us who choose to live an "out" lifestyle are often wrongly accused of "flaunting" our sexuality simply because we have chosen to be open and honest about who we are, regardless of the consequences. 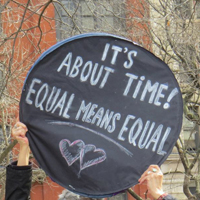 There are many myths about homosexuality that really irritate me, but two of the most irritating are that people "choose" to be homosexual and that being gay/lesbian is a "lifestyle choice." Given that the use of logic and facts seems to have little impact on those who promote these absurd ideas about "choice," I suggest flipping the questions the next time you encounter someone promoting such ideas. Ask them when they chose to be straight, and ask them about their choice to live a "straight lifestyle." Typically, such questioning is met with utter confusion and bewilderment.

While some within the equality movement argue that it's not important to establish or focus on the biological nature of sexual orientation, I disagree, because the false notion of "choice" underpins most opposition to equality for gay and lesbian people. While all consensual sexual behavior is volitional, human beings do not choose their core sexual orientation. Furthermore, diversity in sexual orientation is something to be celebrated, not denied or demonized. An excessive focus on the sexual behavior of gay and lesbian people dehumanizes us and dismisses our core identities as human beings. Ultimately, prejudice and discrimination undermine societal cohesion and devalue what brings us together: our shared humanity as people.

(Please note: Transgenderism was not discussed in this blog post, as it relates primarily to gender identify, not sexual orientation. Additionally, for the sake of brevity, I primarily focused on the phenomenon of homosexuality, but I recognize that the issues discussed apply equally to those who identify as bisexual.)