It was 3 a.m. and my cell phone was blowing up.

The Twitter handle Twothousandswifteen was now following me. TaylorSwiftUpdates had favorited my tweet, with copious re-tweets by the likes of Tator Swift and Dazzling_Swift.

Why the eff was I being digitally accosted by a gang of Taylor Swift devotees?

And then I remembered:

Skimming the Daily Mail earlier that night, I'd come across some pictures of Taylor Swift grabbing a nibble with Selena Gomez. Nothing too out of the ordinary there. Except: Swift wasn't wearing her usual "Mad Men" secretarial look (see here, here and here). No, the "Loving Him Was Red" songstress was wearing an apparatus across her torso that really could only be described as a harness. Not the kind I'd worn at summer camp. No, this harness was the consistency of a necklace, and it went around her back. I could see how it might've been expensive and sort of high-fashion, but at the end of the day, girl was donning a harness. And I needed to know why.

So I did what any entitled millennial would do. I sent this tweet:

hi @taylorswift13- why are you wearing a harness? pic.twitter.com/Q0zWcxhbx3

I was genuinely curious! But also, this is when I need to disclose that I sort of have a bone to pick with Ms.Swift. Yes, "Speak Now" is probably my favorite album of all time. She is very pretty and she seems GENUINELY very nice. Her letter to Apple was well-written and also very effective. I am impressed that she arduously curates care packages for fans she's never met, based on her knowledge of their Tumblrs, when I'm unable to respond to G-chats from friends with anything but a generic "lol."

So why do I not let myself worship at the altar of T-Swift? Because I've long felt that she's the kind of person who'd call her parents to pick her up from a sleepover party because the other girls are passing around a joint. She just feels like a goodie two-shoes on overdrive, too perfect to be human. We're living in the era of celebrating "imperfections"; Lena Dunham's "real body," Jennifer Lawrence's award show tumbles, Khloe Kardashian's camel toe, Cara Delavigne's dropped baggie of coke; Where is Taylor Swift's Achilles' heel? Getting dumped by Harry Styles on New Year's? Some people would kill for that!

What I'm saying is: Swift does nothing to be subversive; she makes no missteps. She's the antidote to the underdog, making her just not fun to root for.

So I harnessed (pun!) my feelings and shot the girl a tweet. With 60 million Twitter followers and presumably lots of texts from Gigi [Hadid] and Karlie [Kloss], I knew it'd likely get swept under the virtual rug.

Half asleep, I waded through my mounting notifications and clicked through to T's Twitter, where I saw her most recent tweet was addressed to "@emilytesskatz." That'd be moi.

It said, as follows: 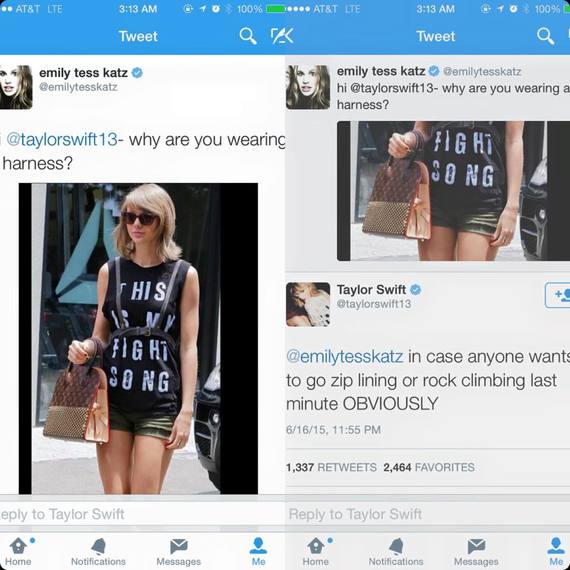 Proof that this actually happened.

I smiled. Then I lolled. Then I read it about 40 more times. I had to hand it to the "Shake It Off" chanteuse: she was exhibiting a good personality.

Hours later though, I woke up a little panicked. My tweet had been snarky, sent from a place of basic rudeness. This is the most beloved human being on planet earth. Who the f#$% did I think I was to question her harness? I'd seen the death threats waged against Kathy Griffin after she'd targeted Demi Lovato -- the "Lovatics" had no patience for that. Any sort of social media warfare with the Swifties wasn't something I was looking for.

I decided to basically unplug from my Twitter for the rest of the day to shield myself from potential tween snark. In the interim, I crafted a tweet to Swift that I'd hoped would placate any fans who suspected me of being a hater:

point taken! not currently wearing a harness but consider me down to climb a rock wall with you @ the drop of a hat https://t.co/mBuytnodke

The twitteraction (portmanteau for 'Twitter interaction') was picked up by Buzzfeed and People.com. It began to occur to me that being tweeted at by Taylor Swift might be the benchmark achievement of my 25.5 years on earth.

And then, at around 4 p.m. that afternoon, a friend's text bore the news that Taylor Swift had deleted her tweet to me. With no explanation. Nada! No more twitteractions would ensue, but I now felt it safe to finally go through all the tweets that I'd gotten. I prepared myself for tweens saying they'd like my head in a noose, but of the 100+ tweets that I read, this was honestly the snarkiest one:

@emilytesskatz @taylorswift13 why do you think you can have an opinion about what she wears?! She has a hard time as it is

Even more to my surprise, most of the tweets I received were really clever. Like these:

@taylorswift13 @emilytesskatz IM DOWN FOR IT, I KNOW PLACES ( no pun intended) WHERE WE CAN DO THAT

@taylorswift13 @emilytesskatz love u Taylor but it didn't go w/ that outfit.

One fan even expressed gratitude for my inquiry:

@taylorswift13 @emilytesskatz my question of the day is answered, yay

I breathed a sigh of relief. And with that, my perception of Swift began to change. The very reason I disliked Taylor Swift was largely to credit for her fans being so nice and respectful. Swift isn't catty. She's just out-rightly nice. SO NICE. Arguably too nice. But my relief at not having been trolled left me questioning whether or not this construct even existed. The Mother Theresa-esque kindness Swift exhibits plays against the fun, edgy image all millennials seem to strive for. But when feelings are at stake, you realize that that shit doesn't really matter. T-Swift's puritanical image had worked to my advantage, bringing me to a conclusion 25 years in the making:

It's 100 times more important to be nice than cool. And while it's cool to like the underdog, it's not nice to dislike someone purely for being successful.

So, Taylor Swift, thank you for shaking my tweet off. Thank you for basically gifting me 100 Twitter followers on a silver platter. And in case you're wondering, the offer for an impromptu rock climb still stands.