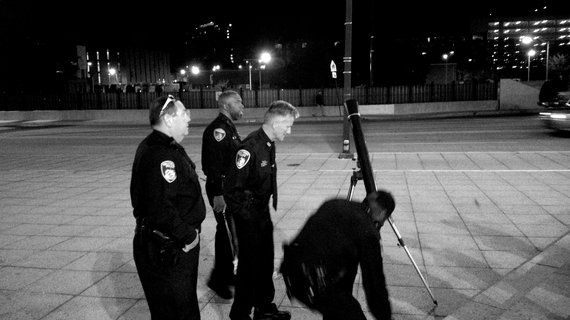 Can amateur public astronomy build communities? After a week of protesting, anger, and introspection, a small group went to Penn Station in Baltimore to find out.

During the days when unrest in Baltimore, Maryland made headlines around the world, Penn Station became one of the rallying points for those seeking answers and justice over the death of Freddie Gray. As the transportation hub transformed into a hub of democratic expression, we sought to highlight the importance of civic engagement in public spaces. One evening, equipped with a telescope and a splash of humility, we decided to "pop-up" at the train station. Hoping to find some common ground and inspiration, we invited passersby to look beyond our differences and into the shared universe.

The project, called Baltimore #popscope, builds on the work of similar free urban astronomy movements in Philadelphia and Ottawa, Canada. The goals of #popscope are to connect people through science in a fun and spontaneous way. Our recipe? One part science, one part community, one part public space, and two parts humility and curiosity. Together, in these three cities, we have held more than 30 public astronomy events, engaging over 500 participants in a variety of public spaces: schools, sidewalks, parks, train stations, and even a parking garage. With a keen eye on impact and sustainability, we are forging at least two partnerships between schools and local astronomers.

How can we help often fractured and segregated communities come together? One way is to foster organic interactions through innocuous shared experiences. Public astronomy is one way of giving every type of person-- whether at-risk youth or accomplished scientists; cops or criminals; people who are black, brown, or white; gay and straight; young or old-- a chance to connect and better understand each other. By hosting #popscope events in public venues, we hope to create a supportive environment for those who do not ordinarily have access to such resources or interactions. In this way, the mysteries of the universe serve as a great equalizer, levelling the playing field between strangers and friends alike.

Imagine the sky on a clear night - it is something beautiful, unfamiliar, and perhaps even inexplicable- that feeling of surprise, admiration, awe, and wonder. The night sky has inspired people and brought communities together for thousands of years. One neighbourhood at a time, we hope to bring people together for many more.

To learn more on how to get involved with #popscope, visit us on our website or join the conversation on Twitter.