"Give me your tired, your poor,
your huddled masses yearning to breathe free..."

Despite what current rhetoric would have you believe, there is no asterisk at the end of Emma Lazarus's iconic poem etched into our Statue of Liberty. The poem doesn't end with *except Muslims or any other prohibition; the sentiment etched on our nation's most iconic statue captures the best of who we are--who we can be--as a nation: a place of refuge, a place of belonging, a place of inclusion. This is the America we believe in.

And yet, as we mark World Refugee Day on June 20th, the United States will have taken in less than 1 percent of the total number of refugees coming from Syria - a country from which half the population has fled in fear for their lives.

Students of history know this is hardly the first time our nation's actions have failed to match up with our ideals--when our fear rather than our compassion has driven us to turn our backs to those in need.

And now we find ourselves in a defining moment once again. Dozens of bills have been filed in Congress that seek to limit the human rights of refugees, by targeting refugees based on their religion or place of origin. Some governors are trying to flat-out bar refugees from resettling in their states, making sweeping and dangerous decisions based on nothing more than bigotry and fear-mongering. 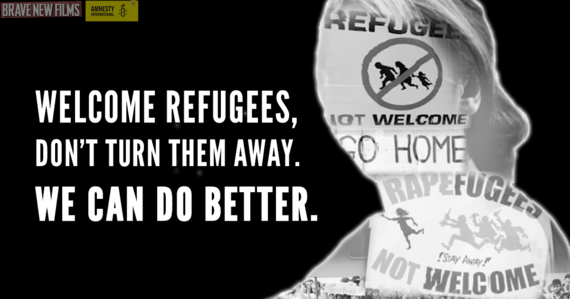 The fear-mongering around refugees has no basis in reality. And despite what politicians and the media would have us believe, Americans overwhelming welcome refugees and think the United States should do more--not less--to help refugees.

In our best moments, we remember that we are a country of immigrants and refugees. A country that in its finest moments has tried to help others in need.

Everyone has the right to safe haven from persecution, and all governments have an obligation not to force refugees back into situations where they will be at risk. We have a responsibility to do more - not less - to help refugees.

Today, on World Refugee Day, you can be the best version of America: write your elected official, demand that we do more--not less--to help refugees.

Share this new film by Brave New Films. Sign the petition through Amnesty International. Today, on World Refugee Day, be the America you believe in.