If you're one of the 51 million Americans with a 401(k) plan, odds are that you're investing in gun and ammunition manufacturers Smith & Wesson, Sturm, Ruger & Co., and Olin Corporation.

Campaign to Unload, a coalition of gun control advocates, is trying to get Americans' retirement money out of the gun industry. It may not be easy.

On April 29, Campaign to Unload launched Unload Your 401(k), a website that lets people see if their 401(k) retirement plan invests in publicly traded gun companies. Roughly half the shares of the three companies are held by mutual funds and institutional investors. The goal is to prompt people to invest their money elsewhere.

It's a similar strategy to that once employed against South African apartheid. In the 1980s, colleges, institutional investors and local governments were pressured to stop investing in companies affiliated with the apartheid regime. Public pressure mounted, and eventually the U.S. government banned investment in South African companies and barred many imports from the country. The divestment and sanctions undermined the South African economy, helping lead to the fall of apartheid several years later.

Similar movements have pushed for divestment from tobacco and fossil fuel companies, with varying levels of success.

"When people learn they might be invested in a company that helps to perpetuate senseless gun violence, it's a horrifying thought," said Cathie Whittenburg, communications director for States United to Prevent Gun Violence, one of the organizations behind the latest campaign.

Smith & Wesson; Sturm, Ruger & Co.; and Olin Corporation did not respond to HuffPost's requests for comment.

Jennifer Fiore, executive director of the Campaign to Unload, told HuffPost Live on Tuesday that the idea for the campaign came after years of watching federal inaction on gun control. Despite the fact that roughly 90 percent of Americans then supported expanded background checks before gun sales, last year bills to expand background checks, ban assault weapons and ban high-capacity gun magazines all died in the Senate.

"We started to look at opportunities for creating change that didn't rely on Congress and the obstructionist gun lobby that was making sure nothing happened," Fiore told HuffPost Live.

The trick is that removing gun stocks from an individual's retirement portfolio could take some work.

The first part is easy enough: Go to UnloadYour401k.com and enter your 401(k) provider in the search field:

Here's an example of the results for Fidelity, one of the country's largest 401(k) providers: 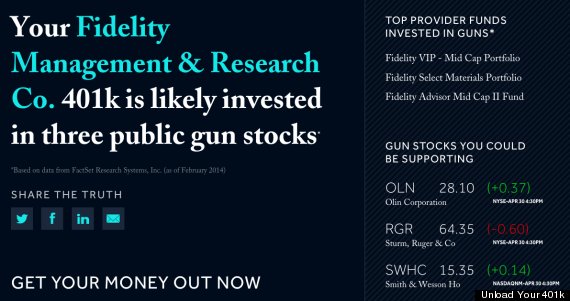 But that's just some broad information. Corporate 401(k) plans are widely invested in mutual funds, and each mutual fund provider offers many different funds. To know whether your particular funds hold gun stocks, you need to get in touch with your company's human resources department, your 401(k) provider or a financial planner. And then you need to shift your money out of the funds with gun stocks into others offered by your 401(k) plan.

Even then, as Bloomberg notes, it can be difficult to "disarm" your portfolio. A lot of 401(k) money is now put into index funds, which commonly buy everything in a particular market segment, so you'll likely find gun companies (and oil companies, adult entertainment companies, etc.) in your portfolio.

One choice offered by some 401(k) plans is the "socially responsible" mutual fund, which generally refuses to invest in companies involved with guns, tobacco, alcohol, adult entertainment, gambling or nuclear power, and those that violate fair labor practices and equal opportunity standards.

"Investors have options," John Woerth, a spokesman for the investment management group Vanguard, said. "They can certainly check the holdings of the fund to determine if their fund has exposure to these [gun] stocks. They then have the ability to move their assets to another fund with a phone call or online request."

Check out this video about the campaign, featuring people affected by mass shootings: