HAVANA, Cuba -- The U.S. government is using a sophisticated cell phone program in a failed effort to spark anti-Castro demonstrations on the island, according to Cuban officials and a US expert.

The US Office of Cuba Broadcasting (OCB) sponsors a cell phone service called "Piramideo" (roughly translated as Pyramid), which spreads propaganda through text messages, according to Nestor Garcia, a former Cuban diplomat who now teaches at the Institute for International Relations in Havana.

"My students started getting text messages on their cell phones with news reports about demonstrations that never happened," Garcia said. "The US is trying to create a climate to protest against the Cuban government."

Piramideo, which has received little media coverage, is just one skirmish in an internet war between the American and Cuban governments, included ZunZuneo, a Twitter-like program secretly backed by USAID from 2010-12. USAID contractors developing ZunZuneo discussed plans to spark anti-government demonstrations. 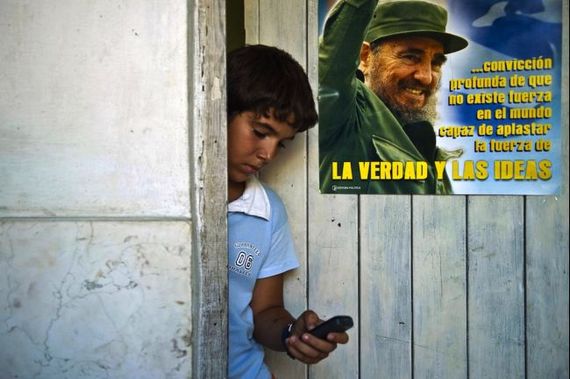 In 2009 the Cuban government arrested Alan Gross, a USAID contractor, for distributing satellite phones aimed at establishing WiFi hotspots to be used by Cuba's small Jewish community. He was convicted of spying, sentenced to 15 years, and remains jailed in Havana.

The OCB publicly announced the existence of Piramideo in June 2013, and it continues to operate today.

Cubans with a cell phone capable of accepting text messages can sign up on Piramideo for free. They type in information on the Piramideo webpage or call a toll-free number to register by phone.

Users choose a name for their "pyramid" and then type in phone numbers for everyone they want to contact. They can then send free text messages through Piramideo to reach all their contacts at once. The service could be used to announce a family birthday party or call for illegal demonstrations.

Carlos Garcia-Perez, director of the OCB, denied that Piramideo aims to stir up dissent in Cuba. "We encourage people in Cuba to connect," he said in a phone interview from Miami. "What they communicate in Piramideo, it's entirely their business."

However, the OCB also oversees Radio Marti, TV Marti, and other programs that do encourage Cuban dissidents. André Mendes, Director of Global Operations at the Broadcasting Board of Governors -- the OCB's parent body -- told US Congress that "OCB works with dissidents in Cuba, the blogging community, and civil activists to improve access to the internet and information in Cuba...."

The US has a long history of attempting to overthrow the Cuban government, starting in the 1960s. The US sponsored numerous assassination attempts against Fidel Castro. Today it imposes a unilateral economic embargo on Cuba, which prohibits American trade or tourism. In recent years the US maintains that it helps promote democracy in Cuba through TV, radio and the internet.

Cuba blocks access to OCB media such as TV Marti. So the US government is constantly trying to find new methods to reach the Cuban public with pro-US messages.

A small number of conservative Cubans and CIA officials still believe these messages can have impact in Cuba, according to Nelson Valdes, a Cuba expert critical of US policy and sociology professor emeritus at the University of New Mexico in Albuquerque. "The real purpose of Piramideo is to stir up agitation against the government," he said.

Some 2 million Cubans now have cell phones and 2.6 million have some internet access, out of a population of 9.25 million over 14 years old. Cuba has one of the lowest per capita rates of internet usage in Latin America.

The OCB's Garcia-Perez said he considers Piramideo a success because it has signed up 12,000 Cubans to date. He said the OCB doesn't track how the mostly young Cubans actually use the service.

Nestor Garcia's students received free phones with a year's service from friends of friends. The phones were preprogrammed with Piramideo. They immediately started receiving anti-government text messages, which he claimed they deleted.

Piramideo and similar programs have little impact on the island, according to Cuba expert Valdes. He said most young Cubans ignore politics whether from their own government or the US.

"I'm not surprised that users ignore the messages," he said, adding that young Cubans "are depoliticized."

That aversion to political messages was confirmed by an internal evaluation of the US ZunZuneo program. A contractor hired by the USAID sent out satirical, anti-Castro tweets in a test phase, but got a negative reaction, according to an Associated Press investigation.

The contractor analyzed messages that responded to the satire. Only 3 percent were "anti-revolutionary," according to the AP. Most users were suspicious of the anonymous nature of the tweets. ZunZuneo closed in 2012 when USAID funding ran out, and the agency was unable to find anyone to continue it.

Piramideo and the various US programs hope to capitalize on Cuban complaints about the country's mobile phone and internet services. Until 2008 the Cuban government prohibited citizens from owning cell phones. When the law changed, hundreds of thousands signed up.

In May, Cuba's state owned phone company launched a new email system for smart phones called Nauta. Subscribers could send and receive emails but not search the web. The initial crush of emails overwhelmed the phone company and crashed the entire cell phone system for some days. Cubans report that Nauta is now operating again, albeit slower.

Cubans also complain about the high cost and slow speed of internet connections. Cubans can visit government internet sites and pay $4.50/hour for a slow connection. Others can access a dial up connection from home. Hotels in Havana charge $7/hour for a WiFi connection that is considerably faster, although still slow by international standards. On average Cubans earn $20/month, so any of these options are very expensive.

Government officials blame the island's internet problems on the US embargo. US phone companies are prohibited from connecting broadband cables from Florida to Cuba. That forces Cuba to rely on a Canadian satellite broadband connection, which is both limited and expensive.

So the island looked forward to better service after Venezuela finished laying a new broadband cable to Cuba in 2011. But it took another two years to become active and, even today, its operation has never been officially announced. It has improved connectivity but not nearly enough to meet the growing demand, according to Cubans interviewed at random.

Esteban Martinez owns a small business with his gay partner Luis Benitez. They pay $60/month for a dial up connection that takes forever to connect, according to Martinez. He reads Spanish language news from Spain, Latin America and even occasionally peruses the stridently anti-Castro Spanish edition of the Miami Herald.

The Cuban government blocks various websites, including pornography and some ultra-right wing, anti-Castro groups. It intermittently blocks some news sites, dissident bloggers and an eBay-like site called Revolico.com because it sometimes offers illegal items for sale.

Martinez said he has plenty of complaints about the Cuban government. For example he and his partner would like to see gay marriage legalized in Cuba.

But they ignore the websites of dissidents such as blogger Yoani Sanchez.

In Martinez' view, Sanchez is tainted by her association with the US and its embargo of Cuba. "I want to see discussion of problems, but the US encourages discussion for its own motives," he said.

A Cuban in his mid-20s disagreed. He has internet access through his work as a low-level government employee. He learned about Sanchez from foreign news broadcasts and is curious about her views. But he would never access her blog from work, fearing possible retaliation from superiors.

He acknowledged that few Cubans have actually read her blog although it hasn't been blocked since 2011. He said most Cubans don't care about her, and even if they had internet access, it could take 20 minutes to call up her homepage.

Cuba expert Valdes noted that Cubans on the island don't generally visit the websites of anti-Castro groups or dissidents. When they connect, he said, they view the same sites as young people everywhere. "They want to know if Colombians are as scantily clad as Cubans," he said.

Cubans remain sharply critical of their country's cell phone and internet systems, but aren't gravitating towards alternatives promoted by the US, according to Valdes.

Retired diplomat Garcia said Piramideo will suffer the same fate as previous US efforts to undermine the Cuban government. He suspects that his students knew the free phones came from US sources. They were just happy to get a free phone for a year.

"They still have the cell phones," he said.

And they just keep deleting the text messages.

Reese Erlich has reported from Cuba since 1968. He is author of Dateline Havana: The Real Story of US Policy and the Future of Cuba.