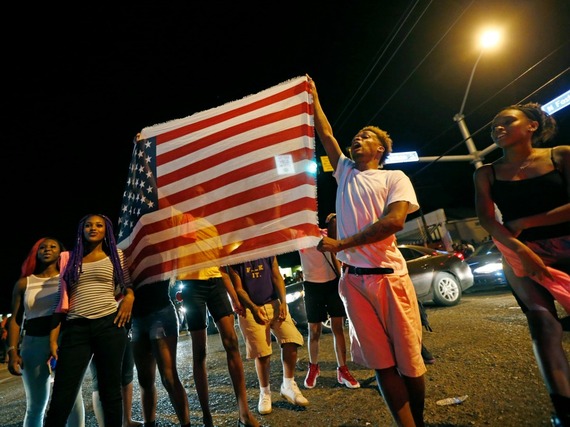 When there is a high-profile case, a police shooting, something that has tensions and emotions riled up. I wait. I wait until all the evidence comes in, I try not to rush to judgment, I wait in order to look at things as objectively as possible.

Then I saw the Falcon Heights shooting video.

I cried for a woman that I do not know and have no connection to. I cried, because I watch her come to the realization that her boyfriend has just been killed right in front of her. I felt her agony as a victim of crime.

Because, this is what it is. A crime of sheer reckless disregard for human life.

You see on the video that the officer still has his gun pointed towards Philando Castile's lifeless body, and is yelling at his girlfriend. The girlfriend calmly stated, still thinking her boyfriend was only wounded, "you asked him to get his license. He told you he had a gun and a license to carry." The officer screams "he made a move towards the gun."

What disturbs me the most is that this is what we tell people of color to do when stopped by police. I've written on this topic previously. Keep your hands visible, declare any weapons you have in the car, tell the officer what you're about to do, and everything will be fine.

Philando Castile followed that procedure, and everything was not fine. He is now dead.

Then, his girlfriend is pulled out of the car and thrown to the ground as if she too was a criminal. As if she is not now a grieving victim.

On the video, you hear the wail that I have heard too often...the wail of loss, of realization that her life will never be the same. The prayers of her asking Jesus to welcome Philando Castile to the afterlife because he is a good person. It is absolutely haunting as well as gut-wrenching.

What bothers me the most is he was doing what he was supposed to do, asked to do, and ended up dead. From a common sense perspective, if Philando Castile meant to do harm for the officer, he certainly would not have informed him that he had a weapon and a permit.

How does Dylann Roof, who massacred innocents in a church, get a meal and a peaceful arrest when a man selling CDs (Alton Sterling) ends up dead?

How, in states where it is not illegal to have a concealed firearm, do you end up dead for exercising your 2nd Amendment right to bear arms? All of the folks from the NRA should be upset too, because they want everyone to be armed -- to carry and conceal weapons. If this is going to be the aftermath, then they to need to be very concerned. Questions have already been asked regarding the NRA's silence by their own members.

I know it is said that body cameras are the elixir; that it will show angles that will prove that police brutality really isn't an issue. There does not appear to be a body camera in the Castile case, only Facebook Live. In the Baton Rouge case which resulted in the death of Alton Sterling, the body cameras "fell off". If the body camera does not hold up as advertised in a chase or a fight, then it is a useless piece of equipment.

This disturbs me on so many levels; as a prosecutor, as a wife, as a daughter, as a citizen. I fear this new breed of officers who are too afraid; they do not deescalate situations, they escalate. Unlike the officers of old, who knew their community and knew who were the gang bangers as opposed to those folks who are merely trying to make a living, some of this new breed do not seem to care. In my fifteen years as a prosecutor, I have encountered all manner of police officer. The majority of the officers retiring now have never discharged their weapons in the line of duty. They learned to interact, and deescalate situations, knowing that lives depend upon their decisions. This change in attitude does not bode well for police community relations; this does not bode well for us as a society.

If you as an officer are too afraid to police communities of color, crippled by stereotypes or racism, it's time for you to move on.

If aggression is your tool of choice rather than of last resort, it's time to move on.

If you are angry at police use of force, the answer is not to shoot innocent people as was done in Dallas. It shifts the conversation from policing as a whole, to allowing officers to justify excessive use of force on people of color because "look what happened in Dallas, we are under attack". Violence begets violence, turning into a never ending circle.

It saddens me that we have come to this point. I'm tired. I'm tired of debating the issue, I'm tired of justifying, I'm tired of telling people that it's going to be OK if you just follow this particular protocol.

Because it is clear, that is not the case.